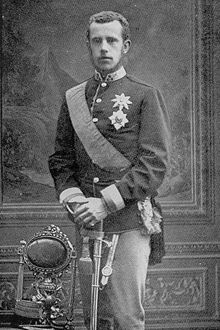 Rudolf, Crown Prince of Austria and Hungary (full first name Rudolf Franz Karl Joseph ; * August 21, 1858 in the New Laxenburg Palace ; † January 30, 1889 at Mayerling Castle ) was the only son of Emperor Franz Joseph I and Empress Elisabeth . He was constitutionally crown prince of imperial Austria ( Cisleithanien ) and royal Hungary . Like all Habsburg princes, in accordance with the house laws of the House of Habsburg-Lothringen , he bore the title Archduke , in Hungarian: főherceg, and was to be addressed with Imperial and Royal Highness . 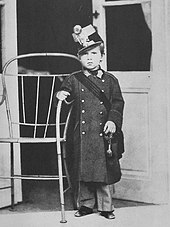 The young Crown Prince was very sensitive and, at the request of his father, was to receive a tough military training. The son was to become a good soldier, enthusiastic hunter and good Catholic. Major General Leopold Graf Gondrecourt was appointed educator. He let the child exercise for hours in the rain and cold, occasionally woke him up with pistol shots and suddenly left him alone in the woods of the Lainzer Tiergarten , causing the child to panic.

This type of training was only ended under pressure from his mother and his natural science inclinations were encouraged, as Count Joseph Latour von Thurmburg appointed them to be his tutor. For example, the German animal researcher Alfred Brehm came to the court to teach him. Rudolf was an inquisitive and eager to learn child who was quick to grasp, but had little interest in reading, writing and foreign languages.

He undertook numerous trips, first in Europe, later also on other continents, about which he wrote several reports - under his name or anonymously. He suggested an Austria-Hungary encyclopedia , the so-called Kronprinzenwerk , and wrote it down himself. In addition, Crown Prince Rudolf was a respected ornithologist . He was often in conflict with his father because he represented liberal and anti-clerical views and preferred the strengthening of the "multinational consciousness" in the Habsburg Empire over national special rights.

According to Berta Zuckerkandl , daughter of the newspaper publisher and long-time Rudolf friend Moriz Szeps , Rudolf had a love affair with a young woman of Jewish faith in Prague - according to his granddaughter Stephanie Windisch-Graetz (1909-2005) his one and only love. According to spy reports in the file of the Viennese police chief Franz von Krauss , this mistress even accompanied him to the bridal show at the Brussels court. She died after breaking out of the exile into which she was banished.

Marriage to Stephanie of Belgium

Under pressure from the emperor, Rudolf had to marry Princess Stephanie in 1881 , daughter of the Belgian king Leopold II. She was the second cousin of Rudolf's father Franz Joseph, as her mother Marie Henriette was a granddaughter of Emperor Leopold II .

The couple lived in Prague for some time , where there were repeated arguments. After the birth of their daughter, Archduchess Elisabeth Marie in Laxenburg in 1883, they returned to Vienna. 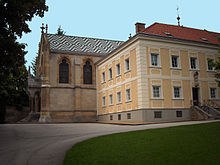 Mayerling Castle, place of death of Rudolf of Austria-Hungary and Mary Vetsera

Rudolf suffered from severe mood swings. He presumably committed suicide on the night of January 29th to 30th, 1889 in Mayerling Castle by shooting in the head. The 17-year-old Baroness Mary Vetsera also died there. According to the doctor's report, she had been shot by Crown Prince Rudolf. It has since been clarified that the baroness actually died from a shot in the head . The Viennese court physicians autopsied the corpse of the Crown Prince and, based on pathological findings in the brain, attested that the act had taken place in a “state of mental confusion”, which enabled the Crown Prince to be buried with all church ceremonies . Baroness Mary was brought to the Heiligenkreuz Abbey and buried in the cemetery of the Cistercian abbey .

At the beginning of February 1889, various reports about Crown Prince Rudolf and the Baroness appeared in the German press. However, they were distributed in Austria-Hungary on February 15 due to a decision by the k k. Regional court in Opava was banned.

The course of the fateful night remains unclear to this day, after the witnesses (including Rudolf's valet Johann Loschek ) remained silent or made contradicting statements all their lives. Many documents were destroyed. The Crown Prince's suicide shattered confidence in the Habsburg monarchy . The alleged murder weapon was in the possession of Otto von Habsburg ; he did not want to publish it all his life (1912–2011). Zita , Otto's mother and wife of the last emperor Karl, insisted in the last years of her life to historians that Rudolf and his Mary Vetsera were not killed by the Crown Prince himself in Mayerling, but "fallen victim to political assassins", according to the German news magazine Der Spiegel reported on Zita's death in 1989 in his short obituary. The historian Brigitte Hamann , herself the author of a Rudolf biography, described the role of the imperial widow in an interview with the Austrian weekly profil in 2005 with the words: “Empress Zita […] wanted us to believe that Rudolf was murdered from behind by the evil Freemasons had been [...]. That was deliberate smoke screen. "Reported early in 1983 , the time , that in the opinion Zita, who claimed it to be able to cite offenders by name, Rudolf" victim of a politically motivated assassination was "a foreign conspiracy because he was not in a conspiracy participate in the overthrow of Emperor Franz Joseph, but wanted to uncover them. According to Zita, the client was the French statesman Clemenceau .

In his will of March 2, 1887, Rudolf appointed his father, Emperor Franz Joseph, as executor . In addition, he asked him to take over the guardianship of daughter Elisabeth Marie (1883–1963), whom he also made his universal heiress.

After Rudolf's death, according to the Habsburg house laws, his uncle Karl Ludwig became the Austro-Hungarian heir to the throne.

When he was baptized, his name was written Rudolph , also when he married in 1881, in an obituary in 1889 Rudolf . The Kronprinz-Rudolf-Bahn , named after him, only bore the name f when it was founded . In 1903 there was a spelling reform in the whole of German-speaking countries, in which ph spellings were changed to f .

Rudolf was a sponsor of the Imperial and Royal Army Museum (now the Army History Museum ) in Vienna. From 1885 he was chairman of the committee responsible for creating and designing the Army Museum.

Mizzi Kaspar (1864–1907) was Rudolf's long-time lover. Rudolf wanted to kill himself with her, but she didn't want to die with him. She informed the police about Rudolf's suicide plans , but they were not followed up. Rudolf spent his last night in Vienna, from January 27th to 28th, 1889, with her; in the morning he left for Mayerling . Rudolf bequeathed Kaspar (at that time 24 years old) 30,000 guilders in his will.

Statue of Rudolf by Miklós Ligeti in Budapest

Several objects were or are named after Rudolf of Austria-Hungary:

Rudolfstrasse in Linz - Urfahr as a central access road to Linz from the Mühlviertel .

The events around Mayerling Castle were a popular topic in films:

Rudolf's fate and death are also dealt with in the 1992 musical Elisabeth .

Several personal items of the Crown Prince are exhibited in the Vienna Army History Museum , of which Rudolf was a patron during his lifetime, such as the headgear he wore, his saber with portepee and a pompous revolver ( caliber 9 mm) made by Gasser .