This article deals with the television program 3sat, for the satisfiability problem 3-SAT of propositional logic see there.

3sat is an advertising - free German-language public television program . As a community facility, the full program with a cultural focus is operated by ZDF , ORF , SRG SSR (represented by Swiss radio and television ) and the national broadcasters of ARD . The lead broadcaster is ZDF, at whose Mainz location there is also the broadcast center with the studios for in-house productions. 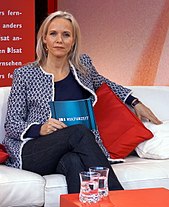 On January 1, 1984, the local cable pilot project started in Ludwigshafen , to which ZDF contributed the newly established ZDF 2 program . In the same year, however, the ZDF, together with the public broadcasters in Switzerland ( Swiss television ) and Austria ( ORF ), decided to found a joint German-language cultural television program for distribution via satellite . This station, known as 3sat ( 3 for the number of stations and countries involved, sat for the then new type of transmission) started broadcasting on December 1, 1984. ZDF 2 was discontinued in favor of the new station.

The ZDF music channel , which was also started on January 1, 1984 , was on the air as an independent program until December 31, 1988, and from January 1989 was switched to the 3sat program as a program window. Until the end of 1993, the ZDF music channel remained as a program brand for music broadcasts within 3sat and then went completely into 3sat. With the cessation of broadcasting of the cultural channel Eins Plus organized by ARD on November 30, 1993 and the associated participation of ARD in 3sat from December 1, 1993, an extensive program reform followed, as a result of which the broadcasting of the ZDF music channel was discontinued. Music programs on 3sat are now mostly grouped under the label Pop around the clock .

In 1989 the station reached 7 million households in Germany, Austria and Switzerland. In 1990 the television of the GDR got involved, and it was considered to rename it to 4sat. However, this consideration was rejected again. The membership of the DFF expired with the dissolution of the broadcaster in accordance with the unification agreement on December 31, 1991. After the discontinuation of its satellite channel Eins Plus on December 1, 1993, ARD followed as a partner. This made 3sat a full program . Today the program shares of the four broadcasters are divided into

Decisions are made by consensus between the partners.

In 1995 the documentary series Treasures of the World started , in October 1995 the culture magazine Kulturzeit . The online portal 3sat.de was launched on August 2, 1999. For its 15th birthday in December 1999, 3sat introduced a new program scheme and the weekday science magazine nano went on air.

In 2003 3sat reached 40 million households in Germany, Austria and Switzerland, and 85.5 million households across Europe. Since June 2003 3sat has been broadcasting with a new design and a new logo. The dominant color of the new design is red. A red rectangle surrounding the three became the logo; in return, the four blue colored squares were removed. With the revision, 49 new TV spots went on air. These overlays, which show different portraits, were rotated with the vertigo effect .

In 2005, 3sat was criticized together with n-tv because the broadcasters had reports on projects from aid organizations such as World Vision and the Christoffel-Blindenmission funded by them. The German Council for Public Relations found no improper conduct in this process.

In 2008, the weekday programs nano and Kulturzeit were each given a new design and a new studio design. During the Medientage Munich 2008, the new Kulturzeit studio decoration was awarded first prize for the “Best Studio Design” at the “Eyes & Ears of Europe Awards”.

As part of the ZDF financial resources were to be used for the budget of the new ZDFkultur program, 2011 marked the end of many long-term 3sat programs. The 3satbörse , the theater magazine Foyer, the computer and internet magazine Neues , the animal show Noah's Ark, the court magazine Recht brisant, Vivo and others have all been discontinued .

On April 1, 2017, the European Satellite Programs Directorate at ZDF , which was responsible for the 3sat and Arte programs, was dissolved. It is being replaced by joint editorial teams with the other ZDF stations that report to the program management.

The »3sat TV- & Kulturmagazin« was a program magazine that appeared quarterly between 2005 and 2018 .

Initially, 3sat could be received via the DFS-Kopernikus satellite and digitally in D2-MAC via TV-SAT 2 . From the beginning, the program was fed into the cable television network of the Deutsche Bundespost . The station is now broadcast in Europe via the Astra satellite and can now be received in almost all of Germany and Austria via all cable networks , in the DVB-T reception areas and via the IPTV platform Telekom Entertain . In southern Africa the program can be received on Deukom stations . Individual programs can be viewed via a live stream in the 3sat media library on the Internet. In South Tyrol the station has been broadcast via DVB-T since May 2010 by the Südtirol broadcaster. For legal reasons, individual films are not broadcast via DVB-T in Austria; a notice is sent instead.

Since April 30, 2012, 3sat has also been available in HD resolution. However, the broadcaster announced in advance that it would not be possible to broadcast native HD content until the beginning of 2013 due to renovation work. Until then, the entire program will only be upscaled, even if the content is actually available in HD resolution. After the move to the HD broadcasting environment of ZDF, which was completed at the beginning of June 2013, the station is able to broadcast programs in native HD.

Adoptions and repetitions from the program of the member stations

In the case of special programming (or possibly on public holidays), certain message formats are not adopted from the broadcasters. ZIB 2 can be omitted on 3sat if it is not broadcast on ORF at 10 p.m.