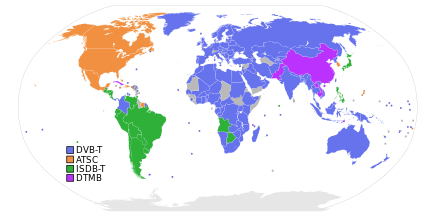 Worldwide distribution of DVB-T in blue

DVB-T (short for English " D igital V ideo B road casting - T errestrial" ; German about: "Digital video broadcast - terrestrial television ") is a variant of Digital Video Broadcasting (DVB), which for the radio transmission of digital radio - and television signals is used via terrestrial (terrestrial) routes. DVB-T was defined in 1997 by the European Telecommunications Standards Institute (ETSI) in the EN 300 744 standard and is the standard in various European, Asian and African countries as well as in Australia. The North American counterpart to DVB is ATSC , the Japanese ISDB and that of the People's Republic of China DTMB (formerly DMB-T / H ).

DVB-T is often known under a different abbreviation in the various countries; in the United Kingdom and Ireland, for example, the designation "Digital Terrestrial Television (DTT)" and, if not chargeable ("Pay TV"), "Freeview", in Spain "Televisión Digital Terrestre (TDT)" or in France " Télévision numérique terrestre (TNT)".

Under the term DVB-T2 , the successor standard of the European Telecommunications Standards Institute (ETSI) with the designation EN 302 755 was defined in 2008 . With DVB-T2, the transmission of more programs or better quality (HD) is possible with the same channel bandwidth, but DVB-T2 is not compatible with DVB-T.

Details on the conversion procedures in individual countries can be found in the articles DVB-T in Germany , DVB-T in Austria and DVB-T in Switzerland .

Signal processing scheme in a DVB-T transmission system, as used in terrestrial broadcasting.

DVB-T does not describe a form of video coding, but the physical bit transmission layer in order to distribute content data such as video data via terrestrial radio transmission. The transmission frequencies used correspond to the UHF and VHF channels already known from analog broadcasting , of which in Western Europe every 7 MHz in the VHF range and every 8 MHz in the UHF range.

With digital broadcasting, these radio channels can be used more efficiently than with analog television technology, since several television programs can be transmitted per radio channel in the form of a multiplex (MUX). For the modulation is COFDM (Coded Orthogonal Frequency Division Multiplex) is used. Within the available bandwidth - 7 MHz for VHF and 8 MHz for UHF - several thousand narrow-band individual carriers are sent. Each of these individual carriers is then in turn modulated with a modulation method such as quadrature phase shift keying (QPSK), quadrature amplitude modulation with 16 or 64 symbols (16-QAM or 64-QAM).

COFDM was chosen as the type of modulation because the propagation characteristics of terrestrial radio broadcasts can lead to shadowing and multipath propagation of the radio signal. These disturbances on radio channels are summarized under the term fading . Further differences to the modulation method of DVB-S and DVB-C lie in the point that the formation of a in the broadcasting of DVB-T simulcast Netzs is provided: In this case, the identical radio signal from a plurality of spatially distributed and broadcast successive synchronized transmission equipment. By interference , both constructive and destructive interference of the radio signals, it is thereby dependent on location to frequency dependent fading, which erases only individual narrowband single carrier in a radio channel. The effects of fading can be suppressed with COFDM by redundant distribution of the information over several individual carriers. Depending on the distance between the individual transmitters in the area of ​​a single frequency network and the transmission power, the parameters of the COFDM are adjusted, such as the length of the guard interval or the choice of QPSK, 16-QAM or 64-QAM. These settings have a direct effect on the user data rate of the transmission.

The data transfer rate achieved in practice per channel is between approx. 12 Mbit / s and just over 20 Mbit / s, depending on the set parameters. For example, North Rhine-Westphalia and most of the other countries only provide 13.27 Mbit / s due to the lower transmitter density and the associated longer guard interval, whereas in Berlin up to 22.19 Mbit / s are achieved. According to information from DVB-T Central Germany, up to 20 Mbit / s can be achieved there with 64-QAM. The data transmission rate in a DVB-T radio channel is divided into several (mostly four) programs. Multiplex processes are used for this, and the individual and mutually independent television programs combined in a DVB-T radio channel are referred to as Mux. Each individual program thus receives an average bit rate of around 3 Mbit / s to 3.5 Mbit / s.

When transmitting images with a high proportion of movement (e.g. action or sports scenes) with only 3.5 Mbit / s, there are unmistakable block artifacts and considerable structural losses. The broadcasting center has the option of assigning the data transmission rate of each program within the multiplex dynamically and within certain limits. From a purely statistical point of view, not all programs require the full bandwidth at the same time.

As with the other DVB variants, with DVB-T the video data is transmitted in a MUX as an MPEG-2 transport stream , while MPEG-2 video has mainly been used to date for coding the video data . However, it is technically possible with DVB-T to send video data streams encoded with MPEG-4 or H.264 , for example in Slovenia and from 2009 to 2014 in addition to MPEG-2 programs in the Stuttgart and Halle / Leipzig.

Advantages of DVB-T over analog television 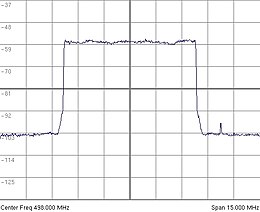 Constellation diagrams of the OFDM channels of a DVB-T signal (8k mode, 16-QAM)

Thanks to digital modulation processes combined with data compression for video data such as MPEG-2 or H.264 , DVB-T can broadcast three to six television programs in standard definition on the bandwidth of a radio channel for analog television. With HDTV, the number would be reduced to one (1080p25 or 1080i50) or two (720p25) television programs. As of 2012, HDTV programs were broadcast regularly in France and Great Britain via DVB-T, parallel to DVB-T2.

Another advantage is the appearance of a MUX several transmitter systems and the operation of a single-frequency network ( English Single Frequency Network abbreviated. SFN ). In principle, this is not possible with analog television broadcasting, since interference occurs in the overlapping regions, which makes analog image transmission impossible. An analog television program blocks the relevant radio channel beyond the actual transmission area, since correspondingly large protective distances are necessary before the radio channel can be "reused".

With DVB-T it is also possible to transmit pure radio programs in addition to television programs in a Mux. However, these options are not always used.

The system gain of DVB-T compared to analog television depends on the specific parameter settings such as modulation (QPSK, 16-QAM or 64-QAM) and the error correction used (between 12 and 50 percent of the gross data transmission rate can be used for error correction). Depending on the general conditions, the system gain can be between 0 dB and 35 dB. There are different ways of dealing with the system gain through DVB-T:

Only if the reception location is favorable (mostly in metropolitan areas), a simple indoor antenna is often sufficient for reception, also for indoor reception , which you can easily produce yourself. Portable television sets can be operated anywhere with the appropriate signal strength and the resulting good signal quality , hence the term “Das ÜberallFernsehen” used in Germany for marketing. Otherwise, the house antenna system that is usually still available in many places is the optimal solution. In some regions, such as north-east Germany, the local transmitter coverage is so poor that even a conventional roof antenna system does not provide sufficient reception.

What is even with DVB-T with analogue terrestrial television overreaching reception possible. As long as the signals do not interfere with each other, the overreach signal, which fluctuates due to the atmosphere, becomes noticeable through a fluctuating image quality with temporary interruptions (black or "freezing" image and broken sound transmission) or the formation of blocks. The VHF band I , which is particularly susceptible to these disturbances , is u. a. therefore not used for DVB-T.

A disadvantage compared to analog terrestrial television is the signal delay of around two to eight seconds. This is created by digitizing the video coding, which includes several image sequences, at the transmitter and during decoding in the receiver. This can be noticed in parallel transmissions over different transmission paths.

Due to the digital transmission, image disturbances due to weaknesses in the digitization systems are possible for a short time. Interference-free reception in trains and in motorway traffic above 80 km / h is only possible depending on the system parameters used and with high investment costs in the transmitter network or through “diversity antenna systems”.

In addition, with DVB-T it is technically easier to encrypt television programs. This makes it easier for the providers to demand additional payment from the viewers (through one-off or recurring chargeable activations). Decrypting end devices can only be obtained from the operator (in Austria simpliTV ), who can set prices for this at their own discretion.

In contrast, with digital television according to DVB-S and DVB-C, a larger number of television programs are available. In the case of DVB-S, this greater variety of programs is due to the greater total bandwidth available and the directional radio properties of satellite connections, despite the lower spectral efficiency . With DVB-C, which is designed exclusively for transmission for cable television , transmission problems such as multipath propagation, signal reflections and fading are largely eliminated, and the requirements for operating a single-frequency network do not play a role in cable transmission, which means that a higher-quality modulation method is used and thus one larger number of programs can be transmitted.