DVB-C (an abbreviation of the English " D igital V ideo B road casting - C able"; German as "Digital Cable Television ") and the successor standard DVB-C2 describe variants of DVB , which for the transmission of digital audio broadcasting - and television signals over cable used become. DVB-C was developed from 1994 and 1998 by the European Telecommunications Standards Institute (ETSI) in the standard EN 300 429set. With DVB-C2, ETSI presented a successor under the designation EN 302 769 in 2010 , which is technologically more complex to implement, but offers higher spectral efficiency . DVB-C is used in Europe, large parts of Asia, Africa, Australia and South America. In areas such as North America, other methods that are incompatible with DVB-C, such as ATSC and in Japan ISDB, are used.

DVB-C and DVB-C2 do not describe a form of video coding or what content is transmitted, but rather the physical bit transmission layer to transmit content data such as video data in cable television networks , taking into account the physical properties of cable networks. Several television programs, radio programs if required, are combined in a DVB-C channel in the form of a multiplex process (Mux). In contrast to terrestrial radio broadcasts such as DVB-T , in cable networks there is in principle no shadowing or multipath propagation of the radio signal. These disturbances on radio channels are summarized under the term fading . Since there are no impairments caused by fading in cable networks, transmission techniques that differ from DVB-T and DVB-S with simpler modulation techniques - compared to DVB-T - and a comparatively higher spectral efficiency - compared to DVB-S - can be avoided. can be used. 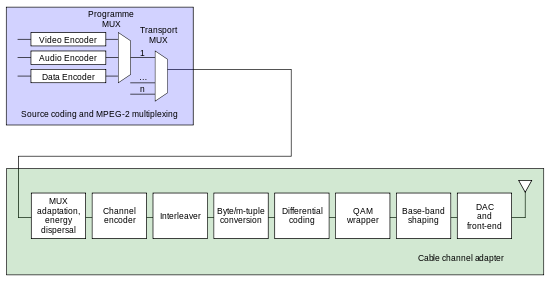 Scheme of signal processing in a DVB-C transmission system as used in cable head- end stations.

In addition to the video and audio data encoded in MPEG-2 and, in the case of HDTV, in MPEG-4 with H.264, DVB-C also enables interactive functions such as Multimedia Home Platform (MHP), Electronic Program Guide (EPG ) and digital teletext are transmitted. Commercial services such as video-on-demand (VOD) and pay-per-view (PPV) can be implemented. These are broadcast in encrypted form - like the linear pay TV already known from the analogue era - and can be subscribed to for a fee. The decryption takes place via the digital receiver using a personalized smart card . This is addressed via a standardized interface, the common interface . Proprietary solutions without a CI interface and smart card are occasionally used.

After only set-top boxes for DVB-C were available for a long time , which were often only sold by cable network operators, most new televisions have been equipped with DVB-C tuners since 2010. In addition to SDTV, which can be transmitted via DVB-C, television programs can also be transmitted in HDTV with DVB-C .

The so-called quadrature amplitude modulation (QAM) is used as modulation in DVB-C , usually in the 256-QAM variant, as this allows the highest spectral efficiency to be achieved in the standard. In addition, QPSK , 16-QAM, 32-QAM, 64-QAM and 128-QAM are available as modulation methods with increasing efficiency . The use of the respective modulation, which is preset by the cable network operator, depends on the technical conditions such as interference signals and intermodulation in the individual cable networks. Modulation methods with a lower spectral efficiency have a higher interference immunity, but can only achieve a lower data rate for a given bandwidth.

In contrast to DVB-T and DVB-C2, DVB-C only works with a carrier signal in the form of broadband communication with a fixed symbol rate . Adaptive channel equalization adapted to this is used, additionally with forward error correction and channel coding using Reed-Solomon coding. The data to be transmitted are combined in packets of 188 bytes; Reed-Solomon coding adds an additional 16 bytes per packet for error detection and correction.

The table below shows the bit rates that can be achieved in a transmission channel with DVB-C, depending on the bandwidth used and the modulation. The usual values ​​in TV cable networks are 64-QAM or 256-QAM with a bandwidth of 6 MHz or 8 MHz.

Under the designation DVB-C2 , a successor standard not compatible with DVB-C was developed by ETSI under the designation EN 302 769 in 2010 , but in 2018 - unlike DVB-S2 for satellite and DVB-T2 for antenna - it was not yet practical Applies. This is mainly due to the fact that broadcasting HDTV in DVB-C is already possible and common.

DVB-C2 is based on the COFDM modulation method with a maximum of 4096-QAM. In addition, the error protection low-density parity check code (LDPC) and a forward error correction (FEC) with BCH codes are used. The spectral efficiency increases from 51 Mbit / s per 8 MHz (6 bit / s Hz) for DVB-C with 256-QAM to more than 83.1 Mbit / s for DVB-C2 with 4096-QAM. These two measures increase the maximum downstream speed in a network expanded to 862 MHz from currently 5 Gbit / s to a total of 8 Gbit / s.

While there were already several field trials of DVB-C2, a control operation only in conjunction with the broadcast of UHDTV and then probably in HEVC - video codec to be expected. The range of devices that are compatible with DVB-C2 was still minimal in mid-2017.

In the following table, the two standards DVB-C and DVB-C2 are compared with the essential technical parameters:

Connections on the back of the receiver

Like the other transmission channels , aerial television and satellite television, cable television was digitized beginning in the 2000s in order to be able to transmit more television programs on the same bandwidth by compressing the content data . The following outlines the events relating to the digitization of cable television with DVB-C for some countries.

Digitization in the cable network took place much more slowly than with other reception methods. In addition to the free-to-air broadcasters under public law and the television provider Sky (at that time still Premiere), there was for a long time only a manageable range of cable channels , mostly in the form of paid foreign program packages. It has only been possible to receive programs from the RTL Group and ProSiebenSat.1 Media digitally via cable in many cable networks since January 2006 . This was preceded by a long-term dispute between the operators and the broadcasters over fees and encryption.

In the period that followed, all private broadcasters were fundamentally encrypted with many providers , so that a chargeable smart card was required for reception. It was not until the beginning of 2013 that this encryption was generally abandoned as a result of a decision by the Cartel Office.

With the large German cable network operators, the range of digital programs has significantly exceeded the range of analog channels since 2013. Spaces that became vacant in the analogue offer were always refilled. Primarily, non-local third programs were replaced by small private broadcasters. Unitymedia was the first operator to switch off analog television in all distribution areas in the course of June 2017. Vodafone completed the shutdown in the last regions at the end of March 2019. Analogue distribution was also completely discontinued at the third major operator Tele Columbus at the end of May 2019. The regional cable network operators have also switched off their analog signal, e.g. B. wilhelm.tel switched off the last still analog PoP (Point of Presence) at the end of April 2019. In Saxony , a statutory disconnection obligation for analog television transmission was originally set for December 31, 2014. In mid-2014, however, the state government of Saxony postponed this date to the end of 2018. After switching off the analogue signal, Unitymedia increased the number of digital programs in SD and HD in August 2017 , and all public broadcasters have been available since April 2018. This means that full digitization throughout Germany should be almost complete by summer 2019.

The largest broadband cable provider operating in Austria, UPC Austria , has been offering television programs in DVB-C without basic encryption for all cable customers since 2001. On May 21, 2008, the DVB-C programs were encrypted in the course of one of numerous digital system conversions. Reception was only possible with a chargeable additional box from the cable provider. Since the beginning of 2013, UPC Austria has once again been offering all television channels that were previously only broadcast in analog format, unencrypted in DVB-C; all that is required for reception is a television with a built-in DVB-C receiver. In May 2014, a start was made to switch off some of the analogue television channels - in future these television programs can only be received via DVB-C. As of April 2019, the originally MPEG2 coded SD channels were converted to MPEG4, which meant that only the audio and EPG information could be decoded on older TV sets.

In Switzerland , DVB-C is handled differently depending on the cable network operator . The offer of the largest cable network operator UPC Switzerland, with a good 50 percent market share in the cable TV sector, comprised around 120 TV channels in the basic digital offer in July 2009 and around 120 more channels divided into various pay TV packages. There are also various HDTV channels and a video-on-demand offer, which (as of July 2009) is not yet available in all networks and not for all set-top boxes used by UPC Switzerland. Alternatively, UPC Switzerland offered a near video on demand offer until September 2009. This offer comprised 16 cinema channels (13 for feature films and 3 for erotic films).

Since May 2010 UPC Switzerland has been offering a CI + CAM , the so-called "DigiCard". This only works in CI + devices. A downwardly compatible CI "Legacy Mode" such as B. known from the CI + modules from Kabel Deutschland or ORF, is not supported. In November 2010 a software update enabled the recording option on CI + recorders and televisions.

Other cable network operators (more than 200 mostly small providers, together around 50 percent market share) often offer an offer very similar to UPC Switzerland in a network ( Quickline , Digital Cable Group ). At UPC Switzerland, as with some small networks, the entire digital TV offering was encrypted for a long time. UPC Switzerland relied on a procedure from Nagravision, many small networks on Conax. The encryption of the basic offer should be banned by law after a motion by Simonetta Sommaruga , but this did not succeed.

In November 2012, UPC Switzerland voluntarily canceled the basic encryption for the basic TV offering of 55 digital TV and 100 radio stations.

Since April 24, 2014, Quickline has been broadcasting all programs (including SD TV) in the space-saving H.264 / MPEG-4 AVC format, which is why first-generation non- HD cable receivers ( digital receivers ) can only reproduce sound.