The ORF regional studios are branch offices of the ORF in the individual federal states . The state studios were founded in 1967 under ORF general director Gerd Bacher . Since 1975 there has also been a regional studio in Bolzano for the German-speaking South Tyrolean population.

The state studios also play a role in the national news and magazine programs. For the time in the picture , contributions from the respective federal state are usually delivered completely (i.e. completely cut) from the state studio to the ORF center Küniglberg in Vienna XIII . In the case of magazine programs such as Thema or Der Report, however, a designer or editor usually travels from Vienna to the federal states and the state studio only provides the camera team and sometimes the editing suite with editor .

The seat of the state studios is in each of the state capitals, with the exception of the state studio Vorarlberg, which is located in the largest city in the state, Dornbirn . There is also a studio in Vienna that is independent of the headquarters on Küniglberg and is housed in the Funkhaus Wien on Argentinierstraße. Each state studio has a state director at the top.

All state studios (with the exception of Vienna) were structurally planned by the architect Gustav Peichl , so that uniformity can be established in all federal states. Peichl proceeded from the principle of technical functional buildings, which exude a certain technical aesthetic and should not hide its function by any structural prettiness . Architecturally, the state studios are reminiscent of the Maison de Radio France , which opened in Paris in 1963 and was designed by Henry Bernard , which also has a spiral structure and focuses on practicality. The recording studios, control rooms, editorial and archive rooms are grouped in a semicircle around a central hall. The management rooms and the garages for the vehicle fleet are housed in a further wing. In addition, each state studio has a public studio with a podium and a roof terrace. 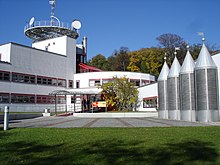 The state studio for Burgenland is located at Buchgraben 51 in Eisenstadt .

The regional studio for Carinthia is located on Sponheimerstraße in Klagenfurt . In addition to Radio Carinthia, with its Slovenian-language editorial team, it also produces programs for Radio AGORA . The national television productions broadcast by the Carinthia regional studio each year include the cabaret Narrisch guat (two programs each during carnival time and two in summer), the children's carnival program Mini-Lei-Lei and the two When the Musi is playing - open airs in summer and winter. In addition, the Slovenian-language programs Dober dan, Koroška and Dober dan, Štajerska (Guten Tag, Carinthia and Styria) are produced. These 30-minute magazines are broadcast on Sundays on ORF 2 in the regional program for Carinthia and Styria at 1.30 p.m. and are repeated on ORF 2 night programs , on ORF III as well as on TV Slovenija 1 and TV Maribor.

The state studio for the state of Salzburg is located in Nonntaler Hauptstrasse 49d in Salzburg (city). See also Radio Salzburg .

The Landesstudio Steiermark is located at Marburger Straße 20 in Graz . Between 1978 and 1981, Graz-St. Peter, right next to the old radio building, the new state studio based on the tried and tested plans by the architect Peichl.

Outwardly, this studio is completely similar to the buildings in the rest of the federal states. Only the interior was adapted to the current state of the art. The official opening of the state studio took place on September 12, 1981.

The old radio house, the Ferry-Schloss in Zusertalgasse, was sold to the Chamber of Commerce.

The Styrian regional studio produces the daily information broadcast Styria today , programs on the series Erlebnis Österreich and Österreichbild , Klingendes Österreich and, until the end, the Alpen-Donau-Adria-Magazin . In addition, the Landesstudio Styria also supplies Zeit im Bild and the ORF sports broadcasts with information and contributions.

The Landesstudio Steiermark is also the home of Radio Steiermark and the headquarters of the editorial team of the internet portal steiermark.orf.at. Via this, users can listen to Radio Styria live over the Internet and access the news program Styria for one week after the broadcast on ORF TVthek today .

The audience studio, which is suitable for public radio and television productions, also serves as a meeting place and turns the state studio into an open house. Vernissages take place in the Funkhausgalerie at regular intervals. ORF Steiermark also organizes readings at the Funkhausteich next to the state studio as well as the Eggenberg Castle Concerts and the musikprotokoll in steirischer herbst . 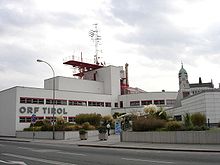 The Tyrolean state studio is located in the Saggen district of Innsbruck at Rennweg  14. The building was designed by Gustav Peichl according to the basic pattern of all ORF state studios and opened on October 13, 1972.

In addition to the local radio program, the television programs Tyrol today and on weekdays South Tyrol today are produced in Innsbruck , whereby the contributions for South Tyrol are produced in Bolzano today, but the program is broadcast from Innsbruck. The Landesstudio Tirol also produces the only live folk music program in German-speaking countries: Mei liabste Weis with Franz Posch , which is broadcast three times a year from various locations across Austria.

The Landesstudio Tirol also runs the Kulturhaus, which regularly hosts art and cultural events and which provides a platform for both well-known and unknown artists.

The regional director of ORF Vorarlberg is Markus Klement. The regional radio station Radio Vorarlberg broadcasts its program around the clock. The news program Vorarlberg today is broadcast on ORF 2 nationwide every day at 7:00 p.m. The state studio in Vorarlberg is the only one that still has its original facade. All other identical studios have meanwhile been painted white. 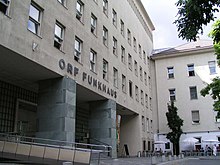 The regional studio for Vienna is located in the Funkhaus Wien in Argentinierstraße 30a. Radio Vienna and Vienna , among others, are produced here today .