Phoenix (own spelling: phoenix ) is a public television broadcaster operated as a joint facility by ARD and ZDF . The ARD side is represented by the WDR . The program of the special-interest broadcaster, which started as an event, politics and documentation channel, consists of event broadcasts, news programs, documentaries / reports and discussion programs .

Program managers are Michaela Kolster from ZDF and Eva Lindenau from ARD / WDR. The station is located in the former capital city studio of WDR and ZDF in Bonn . 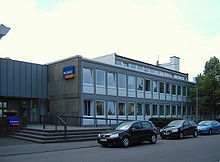 Administration and studio in Bonn

The program phoenix on site, broadcast from Monday to Friday at 9:00 a.m., 10:00 a.m., 12:00 p.m. and 2:00 p.m. is dedicated to current events in the form of reports, discussions and the transmission of press conferences and the like. Ä. In the case of important current events and the broadcast of Bundestag sessions or party conferences , additional issues of the program are included in the program or the issues are extended during the day.

Phoenix does not produce its own news programs , but takes over the main edition of the Tagesschau every day, as well as the heute-journal Monday to Thursday, and broadcasts both programs with sign language interpreters . The current day's events are presented in detail in the program phoenix der Tag , Monday to Friday, 11 p.m. to midnight, in detailed reports and interviews.

On current political issues, the discussion is on Mondays at 22:15 under the linden (Moderation Michaela Kolster and Eve Lindenau) and Tuesday through Thursday at 22:15 the show phoenix round broadcast (Moderation Alexander Kahler and Anke Plättner).

On Fridays at 6:00 p.m., the talk show phoenix in person (with Michael Krons , Inga Kühn and Alfred Schier) is broadcast, in which the moderators speak to a prominent personality.

On Sunday at 12:00 the press club will be taken over by the first or the international morning pint will be broadcast if the press club is canceled. Various discussion programs are also broadcast on Sundays at 1:00 p.m.

In addition, the current political ARD and ZDF talk shows ( Anne Will , Maybrit Illner ) from the previous day will be repeated on Monday and Friday at 4 p.m.

Various documentaries are broadcast on Saturday from 11:30 a.m. to 5:00 p.m. and 8:15 p.m. to 11:15 p.m., usually on one topic. This includes Saturday night at 21:45 or in the context of specific topics and a documentary . On Saturday night, the repetition of the current issue of having ZDF History 23:15 their fixed time slot .

On Sunday afternoon from 2:00 p.m., certain historical events will be highlighted in more detail on the basis of documentaries in the phoenix history series .

The night-time program mainly includes not only repeats documentation from the transmission lines Discovery - Explore the world and ZDF Expedition or Terra X . There are also synchronized documentaries from English television and travel reports from ZDF and arte .

The initiative to found the channel came from ARD. Together with the ZDF, a program concept was developed which, in addition to the originally intended broadcasts of parliamentary sessions, also included other broadcasts and, above all, additional documentation and talk shows. The name idea came from Fritz Pleitgen and refers to the library of Apollodorus , where Phoenix is ​​named as the third brother of the king's daughter Europa .

After it began broadcasting, Phoenix could only be received mainly in the cable networks of Deutsche Telekom and via the ASTRA 19.2 ° East satellite system. In the first few months, a transponder was used on the Astra 1D , which could not be received by all satellite households due to the frequency band below 10.950 GHz, which was still atypical at the time. Only when the program switched to Astra 1C at the turn of the year 1997/1998 was it possible to increase the technical range to around 17 million households.

Initially, the station in Cologne was located at WDR, until in 2000 it moved into the modernized former capital city studio of ZDF in Bonn.

In August 2006, Phoenix achieved an average monthly market share of 1.0%, which was the highest audience rating in the history of the station to date. With around 4.5 million viewers daily, Phoenix was ahead of the private information channels n-tv and N24 . The market share increased in 2006 from an annual average of 0.6% to 0.7% up to 0.9% in 2008. The upward trend in acceptance continues.

In 2007, 90 permanent and just as many freelancers worked for the station, which has an annual budget of around 35 million euros from the funds of the broadcasting fees.

To mark the ten-year anniversary of the station, Phoenix has been making contributions to a hundred selected events, speeches and conversations from the broadcasting history available for download on its website since June 11, 2007. The program has been broadcast in 16: 9 format since 2007.

On November 26, 2008, the old blue transmitter design from 2000 and 2003 was replaced by a new one. For this purpose, the logo, the new studio in the broadcasting center in Bonn, overlays and the website were redesigned. The new logo contains the station name and the current time in black letters on a light gray background.

In December 2010, Phoenix received its highest average market share in a month to date, at 1.3 percent. According to the broadcaster, reporting on Hartz IV in the Bundestag and Bundesrat was in particular demand. In November, Phoenix even achieved quotas of up to 5.3 percent with live reports on the arbitration in the dispute over the Stuttgart 21 rail project , which was also a record.

In 2011 the station achieved its best annual value since its inception with a market share of 1.1 percent. Most popular with the audience were contributions to the political upheavals in the Arab world , the Fukushima nuclear disaster and the financial crisis .

Since April 30, 2012, an HD offshoot of the television station has also been broadcast. The broadcast was mainly done by upscaling the SD signal, only a few programs were broadcast in native HD. Native HD broadcasting started on August 19, 2015.

Phoenix has had a new design since June 4th, 2018. The previous station logo with the time in the upper left corner of the screen has been separated. The new, simple logo in white letters is now positioned in the lower left corner. The time is now displayed in the lower right corner of the screen. The new transmitter colors are petrol and turquoise . Breaking news are shown in a red belly band . Further information on the program is displayed in yellow.

The Phoenix program can be received in the following ways:

In the course of the partial analogue shutdown on July 1, 2015 in the cable television network of Unitymedia , Phoenix could only be seen analogue in a time window from 5:00 a.m. to 5:00 p.m., as the station had to share a program slot with 3sat . Since the shutdown of all analogue TV channels in the Unitymedia network in June 2017, Phoenix is ​​no longer broadcast analogue there.