A sign language is a visually perceptible natural language , particularly of non-hearing and hard hearing people to communicate is used. Communication is based on a combination of gestures , facial expressions , words spoken silently and posture. These elements are combined into sentences and sentence sequences.

Sign languages ​​belong to the typology of strongly inflected or agglutinating languages . A sign can consist of several meaningful components or morphemes . Therefore they have a very flexible word order in the sentence.

In deafblind people, the signs are perceived through the haptic perception of hand movements and hand shapes. In addition, there are certain cultures in which non-deaf people also use or used a sign language, e.g. As the female members of the Australian Warlpiri -Volksstammes and the indigenous peoples in North America . To be distinguished from sign languages ​​are manual coding systems (sign symbols) that are used by people who have difficulties with spoken language due to another impairment, such as supported communicators and people with mutism or from the autism spectrum .

It is not certain how many sign languages ​​there are worldwide. The 2013 edition of the journal Ethnologue lists 137 sign languages. Dialects are not included in this list - for example, there are 12 dialects in Switzerland.

The essence of sign language and its relationship to spoken language

The sign for German in some sign languages ​​symbolizes a spiked hat and used to mean “ policeman ” in the German-speaking area .

For comparison: The DGS signs for German in sign writing .

The signs are phonologically broken down into four parameters, which are further analyzed phonemically : hand configuration, hand orientation, movement execution and location of movement. Many signs are strongly inflected . Information can be incorporated pronominally (through various visible forms) in a single sign, e.g. B. in the DGS the verb gesture, glossed with ICH-BUCH-GGBEN-DIR-SCHNELL includes the direction of movement from “I” to “you”, and that fast, and the hand configuration indicates holding an imaginary book. If modified in the movement from “you” to “I”, you-BOOK-GIVE-ME-FAST results. The gesture can be modified with other hand shapes to indicate what is being given e.g. B. a thick or thin book, a bottle, a soccer ball or golf ball, a piece of paper, a stack of books, etc. In addition, there is the different orientation of the hand or hands, whether the object is transferred horizontally or vertically. A total of seven parts of meaning can be recognized in this single sign: subject, recipient (singular or plural), its locality (left, right, near or far), object, size or quantity of the object, verbial adverb, once or repeated. In addition, there are additional meanings due to parts of the face and head movements, e.g. B. "gladly" or "reluctantly" can be shown with it. In addition to inflection, this is also referred to as " incorporation " in linguistics .

Because the signs can be broken down and structured within the sentence, sign languages ​​must be viewed as independent and fully-fledged languages . As is often mistakenly believed, they cannot be regarded as derived from the spoken language of their surroundings. The name of the sign language in Germany, German Sign Language (DGS), does not mean German in sign form, but sign language as used by deaf speakers in Germany.

The gestures formed by the hands form the content of a sentence. In addition, movements of the upper body and face play an important role. Especially facial expressions are used to encode grammar. Many grammatical function words, such as if or if, are only expressed in the face. Since grammar is mainly expressed through facial expressions, sign language speakers are also more likely to look into the eyes than the hands.

Sign languages ​​differ from country to country and even within a country. In the German-speaking countries, the German Sign Language (DGS), which is used in Germany and Luxembourg, the Austrian Sign Language (ÖGS) and the German-Swiss Sign Language (DSGS) are used. The sign language used in Liechtenstein is closely related to the DSGS and can therefore be viewed as a DSGS dialect. Within Switzerland, the DSGS knows five different dialects (Zurich, Bern, Basler, Lucerne and St. Gallen dialect), while Switzerland also knows the Langue des signes Suisse romande (LSF-SR) with five dialects and the Lingua dei segni della Svizzera italiana (LIS-SI) with two varieties.

The most widespread is the American Sign Language (ASL), used in North America, on Caribbean islands except Cuba, in parts of Central America and in some African and Asian nations.

Sign language has so far not been practically written for everyday use , although there are several approaches to this. For scientific purposes there are " notation systems " such as B. the HamNoSys (Hamburg notation system); these work z. B. with the decomposition of each sign in hand shape, hand position, execution area, movement execution etc. and respective symbol representations.

The sign writing SignWriting developed by Valerie Sutton is used by students in the State Education Center for the Hearing Impaired Osnabrück and in Nicaragua .

Signs are more often written down by glossy transcription, a process in which single words or hyphenated word strings of spoken language serve as codes for signs , usually written out in capital letters . This procedure is quite incomplete and cannot reproduce everything that is sent out by sign speakers. In addition, the word codes are not always standardized.

The so-called manual-visual coding systems of the German language must be distinguished from sign language: 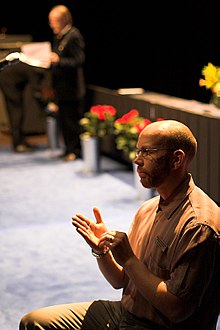 In Germany, at the latest since 2002, when the Disability Equality Act (BGG) and the Communication Aid Ordinance (KHV) came into force, the right of deaf people to have sign language interpreters (especially at authorities, police and courts, but also at work) and other communication aids (such as text interpreters ) regulated by law.

Since the end of 2006, a qualifying degree as a sign language interpreter has been required in many areas. The Office for Teacher Education in Darmstadt and the Bavarian Ministry of Culture offer a state examination . Proof of training is not required for the state examination, but many years of professional experience are required. The academic diplomas of the universities and technical colleges can, on request and for a fee, be equated with the state examinations.

The Federal Association of Sign Language Interpreters in Germany (BGSD) e. V. is the professional representation of the sign language interpreters organized in Germany.

In July 2017, a glove developed at the University of California was presented that analyzes the gestures of a hand and can for the first time translate the ABC of signs into written language.

In addition, the company SignAll is developing a system that is intended to enable spontaneous communication between a deaf person and a hearing person using automated translation technology. According to the description, the system designed for the US spoken or sign language ASL records all aspects of sign language, including hand shapes, facial expressions and relative positions of the body parts.

The translation of texts into sign language by means of software became possible for the first time with the SiMAX 3D Avatar from the Austrian company called Sign Time GmbH. Both the texts and the signs are translated into different languages ​​and serve as a support for the dissemination of information.

Roger Fouts trained the chimpanzee Washoe , who was born in Africa in 1965, to use a total of 250 signs in the American sign language ASL , trying to establish communication between humans and animals. Also with other animals, u. a. Bonobos and gorillas, such spectacular dressage tests were carried out, some animals allegedly acquired a vocabulary of over 1000 words.

Other researchers, however, examined original sign and body signals from great apes and concluded that humans also used a sign language before they spoke. Your observation supports an older theory that sign language was the most primitive form of human communication. 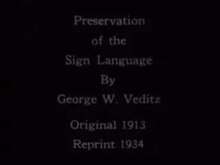 Further links can be found under DGS , DSGS and ÖGS .