With the Palme d'Or ( French Palme d'Or ) at the annually organized film festivals of Cannes , the best feature film in the official competition awards. It is considered the most important award of the festival, even before the Grand Jury Prize . As is the case with the Golden Lion of the Venice Film Festival or the Golden Bear of the Berlinale in relation to the respective city, the motif was taken from the city arms of Cannestaken. A competition jury, which is mostly composed of international filmmakers, votes on the award of the prize. Since 2011, another Golden Palm has been awarded as an honorary prize for the life's work of a filmmaker.

The name Golden Palm has existed since 1955, before that the film award was known as the “Grand Prize of the International Film Festival” (Grand Prix du Festival International du Film, or Grand Prix for short ) . Until 1954, the winners received prize trophies designed by well-known contemporary artists. Only at the end of 1954 did the organizing committee, on the initiative of Robert Favre Le Bret, invite several jewelers to create a prize based on the palm tree motif. The design by the well-known French designer Lucienne Lazon prevailed and was the godfather of a trophy that was first awarded to the American Delbert Mann ( Marty ) at the eighth edition of the film festival in 1955 .

The trophy has been redesigned several times in the history of the film festival and has always been based on the artistic taste of the time, while the Grand Prix was reintroduced from 1964 to 1974 for legal reasons . The prize was last redesigned in 1997 on the 50th birthday of the film festival at the suggestion of Caroline Gruosi-Schäufele from Chopard , the official partner of the film festival. In filigree work , the designer designed the neunzehnblättrigen palm fronds from 24 karat gold and put it to a simple, hand-cut into a rectangle specimen of rock crystal . The Golden Palm has been handcrafted in the Swiss Chopard workshops in Meyrin since 1998 . A total of seven goldsmiths and jewelers need around 40 hours of work to produce the trophy. The material value of the golden palm, which is contained in a box made of blue Moroccan leather , was estimated at 25,000 euros in 2007 . For the 70th edition of the film festival in 2017, the trophy was set with 167 small diamonds, which were placed "like stardust" over the golden palm leaf.

The works of American film directors (21 victories) were most frequently awarded the main prize in Cannes, followed by their colleagues from France (14), Italy (12) and Great Britain (10). The Swede Alf Sjöberg (1946 and 1951), the American Francis Ford Coppola (1974 and 1979), the Japanese Shōhei Imamura (1983 and 1997), the Bosnian-Serbian filmmaker Emir Kusturica (1985 and 1995) each triumphed twice , the Dane Bille August (1988 and 1992), the Belgian brothers Jean-Pierre and Luc Dardenne (1999 and 2005), the Austrian Michael Haneke (2009 and 2012) and the British Ken Loach (2006 and 2016). In addition, the jury in the past was repeatedly unable to agree on a winning film, such as 1993, when the Chinese Chen Kaige ( Farewell My Concubine ) the Palme d'Or with Jane Campion ( The Piano ) announced. The New Zealander, along with the Danish Bodil Ipsen (honored as co-director of Rote Wiesen with the Grand Prix in 1946 ) and the French Julia Ducournau (awarded for Titane in 2021 ), is one of the only women film directors who were able to win the main prize in Cannes. 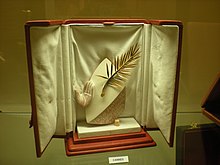 A director from German-language cinema was successful for the first time in 1946, when The Last Chance of the Swiss Leopold Lindtberg was awarded along with ten other productions. He was followed in 1979 and 1984 by the Germans Volker Schlöndorff ( Die Blechtrommel ) and Wim Wenders ( Paris, Texas ) , while in 2009 and 2012 the Austrian Michael Haneke ( The White Ribbon - A German Children's Story and Love ) triumphed. 1956 and 2004 with Jacques-Yves Cousteau and Louis Malles The Silent World and Michael Moore's Fahrenheit 9/11 documentaries prevailed.

In the past, the jury had the opportunity to combine the main prize with other awards. This last happened in 2000, when Dancer in the Dark was awarded the Golden Palm as well as the actor's prize for the Icelandic artist Björk . Meanwhile, the regulations prohibit that the main prize (as well as the Grand Prize of the Jury and the Director's Prize ) can be cumulated with other awards. This fact has been criticized repeatedly, most recently in 2012, when the jury president Nanni Moretti admitted in the final press conference that he would have awarded Michael Haneke's winning film Liebe without any regulations the Actor and Screenplay Prize. A year later, the competition jury headed by US director Steven Spielberg defied the regulations and awarded the Golden Palm to Blue is a warm color by Abdellatif Kechiche and the two leading actresses in the film, Léa Seydoux and Adèle Exarchopoulos .

1In 2013, the competition jury awarded the main prize to both the director of the film and the two leading actresses Léa Seydoux and Adèle Exarchopoulos .

During the 55th Film Festival in 2002, a retrospective was held devoted to twelve feature films that should have been shown at the originally planned first edition of the festival in 1939, including the following seven in competition:

A jury consisting of the Israeli Lia van Leer , the French historian Raymond Chirat , the German Dieter Kosslick , the Italian Alberto Barbera and the Tunisian Férid Boughedir , chaired by the French author Jean d'Ormesson, subsequently selected Cecil B. DeMilles Film Union Pacific as the best Film of the year 1939, which was honored with an honorary Golden Palm.

At the beginning of April 2011, the festival management announced that it would also be awarding the Palme d'Or as an honorary award. Since 2011, during the opening ceremony, important filmmakers, whose work is considered authoritative, but has never been awarded a regular Golden Palm, have been awarded a " Palm of Honor" ( French Palme d'honneur ) or a "Golden Palm of Honor" (Palme d'or d ' Honneur) , excellent. The festival follows the example of the Venice and Berlin film festivals, which have offered such a prize since 1970 ( Leone d'Oro alla carriera ) and 1982 ( Honorary Golden Bear ). Already in 2002, 2008 and 2009 the Golden Palms had been awarded to the directors Woody Allen , Manoel de Oliveira and Clint Eastwood .