Jodie Foster was born as their fourth child a few months after their parents split up. At the beginning of 1963, her German mother, Brandy, moved with the children to the San Fernando Valley in northwest Los Angeles to live with her partner, who made the major contribution to the family support. The relationship lasted until 1976. Together with her older siblings, brother Lucius Fisher "Buddy" (* 1957) and sisters Lucinda "Cindy" (* 1954) and Constance "Connie" Foster (* 1955), Jodie grew up in Los Angeles on. There she attended the renowned bilingual private school of the Lycée Français de Los Angeles .

Brandy Foster worked in the film industry. One of the auditions , the then three-year-old Jodie had come along and for an advertisement for sunscreen Coppertone been committed. For financial reasons, the single mother agreed to her daughter's advertising appearances. 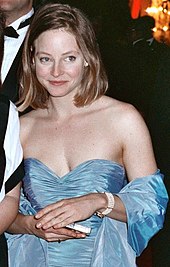 Her first film role she played at the age of ten in the Disney film Escape into the Wilderness (Original title: Napoleon and Samantha , 1972). She made a number of other films for this studio in the 1970s. In 1974, her director Martin Scorsese first gave a supporting role in his film Alice Does Not Live Here Any More . Convinced of her talent, he cast Foster in his next film, and the then 13-year-old actress became world-famous as an underage prostitute in Taxi Driver (1976). In addition to an Oscar nomination for Best Supporting Actress , Foster received two British Academy Film Awards and the David di Donatello for her performance .

In the same year she starred in the comedies Bugsy Malone and Crazy Friday . Foster won two British Academy Film Awards for Bugsy Malone and a Golden Globe nomination for Best Actress in a Comedy for Crazy Friday . In The Girl at the End of the Street (also 1976) she played an independently living, highly talented young person, a role that corresponds to her image to this day and for which she was awarded the Saturn Award . The offer, the role of Princess Leia Organa in Star Wars ( Star Wars , 1977) to take over, they had to because of contractual obligations to the Disney Corporation refuse.

During her student days, Foster wrote several articles for magazines and interviewed Nastassja Kinski , among others . The two women became friends and were looking for a way to work together on a film project. The opportunity arose in 1984 with the film Hotel New Hampshire , based on a novel by John Irving . Four years later, Foster took on the role of a raped woman in Accused , for which she received her first Oscar .

In 1991 she made her debut as a director with The Child Prodigy Tate . Regarding the situation of women in Hollywood , she said that the industry is not particularly well-disposed towards women, but it needs them. “But the female pioneers have to be ten times better than any man. Maybe one day we'll found an 'Old Girls Network' ... "

In the same year she played an FBI agent in The Silence of the Lambs instead of Michelle Pfeiffer . Her acting collaboration with Anthony Hopkins earned both actors an Oscar. In 2001 she dissolved her production company Egg Pictures for family reasons. The films produced include her own works, Lost Heaven , Waking the Dead and Baby Blues .

She occasionally took on speaking roles, as in 1996 and 1997 in the series Frasier and The X-Files in one episode each as a caller and as a voice in a hallucination sequence. In an episode of The Simpsons , she can be heard in the US original as the voice of Maggie Simpson . In 1997, Yale University awarded her an honorary doctorate . 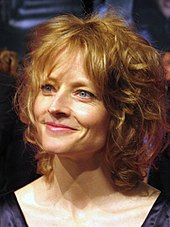 Foster is one of the highest paid actresses in Hollywood. In 2007 she was ranked ninth in a Hollywood Reporter ranking with an estimated fee of 10 to 12 million US dollars per film. In July 2008, she was ranked sixth in a Forbes ranking with salaries of $ 23 million (between June 2007 and June 2008) behind Cameron Diaz , Keira Knightley , Jennifer Aniston , Reese Witherspoon and Gwyneth Paltrow .

In the same year she played a journalist in the film The Stranger in You , who is pushed into the position of an angel of vengeance by a brutal crime. She describes her role as follows: “This is not about revenge. It's about a woman who wants her life back. In doing so, she has to follow the urge to pull the trigger again and again. She discovers a cruel side in herself and lives it out in order to survive. She learned what powerlessness feels like. Gun in hand, she takes power. Even about life and death. "

Foster presided over the 2011 César Awards while filming Roman Polański's film version of Yasmina Reza's play The God of Carnage in France . In 2013 she received the Cecil B. deMille Award for Lifetime Achievement at the Golden Globe Awards ceremony .

She was awarded the Palm of Honor at the Cannes International Film Festival in 2021 .

The standard speaker for Foster's German dubbing voice is actress Hansi Jochmann , while Foster is dubbed by Heidrun Bartholomäus in the films Nell and Lost Heaven . Foster himself speaks and understands a little German . In French versions of her films, she synchronizes herself as she speaks the language fluently.

2021: Honorary award for her life's work