Gwyneth Katherine Paltrow (born September 27, 1972 in Los Angeles , California ) is an American actress , entrepreneur , model and singer . She is a Golden Globe and Oscar winner.

Paltrow was born to director and television producer Bruce Paltrow and actress Blythe Danner . Her father was of Polish-Jewish and Belarusian - Jewish descent, while her mother is a Quaker from Pennsylvania Dutch with more distant English ancestors from Barbados . Paltrow's great-great-grandfather on his father's side was originally called Paltrowicz and was a rabbi in Nowogród (Poland). She has a brother named Jake Paltrow , who is also in the film industry, and a cousin named Katherine Sian Moennig , also an actress. When Paltrow was 15, she spent a year in Spain . Since then she has been speaking fluent Spanish , on April 12, 2003 she was made an honorary citizen of her exchange town Talavera de la Reina . She graduated from high school and then attended the University of California, Santa Barbara , where she studied art history. She dropped out of college and devoted herself to acting; she had proven her talent earlier when she took part in plays with her mother.

In 1990 Paltrow made her professional theater debut. She played her first film role in Shout (1991) on the side of John Travolta . In the same year she played the young Wendy in the fantasy film Hook, directed by her godfather Steven Spielberg . She had minor roles in the thrillers Flesh And Bone (1993) and Malice (1993) with Nicole Kidman .

She became better known in 1995 on the side of Brad Pitt and Morgan Freeman with a supporting role in the film Seven , which was an international hit and Paltrow earned a nomination for the Satellite Award . In 1996 she played the title role in the film adaptation of Jane Austen's Emma , for which she received positive reviews. 1997 Paltrow was talking for the role of Rose in the drama Titanic by James Cameron , but then Kate Winslet was occupied.

In 1998 Paltrow made her international breakthrough with the lead role of Viola De Lesseps in the romantic comedy Shakespeare in Love , in which she played the fictional friend of William Shakespeare ( Joseph Fiennes ). The film was a hit with both critics and cinema audiences, and Paltrow won numerous film awards for her performance. She has received an Oscar for Best Actress , a Golden Globe for Best Actress - Musical or Comedy, and the Screen Actors Guild Award for Best Female Leading Role . In 1999 she starred alongside Jude Law , Matt Damon and Cate Blanchett in the drama The Talented Mr. Ripley . In 2000 she played alongside Ben Affleck in the love story Bounce - A Chance for Love . In 2001 she worked as Margot Tenenbaum in the ensemble film The Royal Tenenbaums to see and in the title role of the comedy Shallow Hal alongside Jack Black , for which they have a partial fat suit had to wear. She also played the lead role in the unsuccessful comedy View from the Top (2003), for which it 10 million dollars received Gage, and was next to Angelina Jolie in Sky Captain and the World of Tomorrow to see (2004).

In 2006 Paltrow received another Golden Globe nomination for the drama The Proof - Love Between Genius and Madness (2005). In 2007 she starred in The Good Night directed by her brother Jake. In 2008, the US American Forbes Magazine named her one of the highest-paid actresses in Hollywood . Between June 2007 and June 2008, she received fees of 25 million US dollars, which she and Reese Witherspoon ranked fourth behind Cameron Diaz , Keira Knightley and Jennifer Aniston . 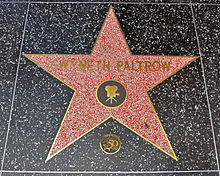 Paltrow's star on the Hollywood Walk of Fame

In 2008, Paltrow founded the Goop website on the basis of a newsletter with personal lifestyle tips from her and an online shop with matching products. That same year, she appeared as Pepper Potts in the action film Iron Man with Jr. Robert Downey on. The film grossed over $ 500 million worldwide and Paltrow was nominated for a Teen Choice Award in the Choice Movie Actress category. In the sequel Iron Man 2 , she repeated her role and was again nominated for a Teen Choice Award and a Scream Award for Best Action Actress . On December 13, 2010, Paltrow was honored with a star (# 2427) on the Walk of Fame in Hollywood.

Until July 2017 she played the role of Pepper Potts in three other productions from the Marvel Cinematic Universe . In addition, she has starred in five other films since Iron Man 2 , and she was also seen in the series Glee (2010, 2011 and 2014) and Web Therapy (2014).

In March 2011 she reached Do You Wanna Touch Me? (Oh Yeah!) , A cover version of the song of the same name by Gary Glitter (1973), number 1 on the Australian charts. In the same year she received an Emmy for her guest appearance as Holly Holliday in the American television series Glee .

After relationships with Brad Pitt (engaged from 1995 to 1997) and Ben Affleck ( dating from 1998 to 2000), Paltrow married Chris Martin , the singer of the British band Coldplay, on December 5, 2003 in California . Their daughter was born on May 14, 2004. On April 9, 2006, Paltrow gave birth to their second child in New York . Paltrow and her husband used to be vegetarians . In her Goop newsletter of February 4, 2010, however, she wrote under the heading “Meatless Monday”: “I am not a Vegetarian”. This statement was used in 2011 in a promotional film made with her for the supermarket chain Spar .

On March 25, 2014, Paltrow and her husband Chris Martin announced the separation on their website. Paltrow and Martin have been divorced since July 2016.

In January 2018, she announced her engagement to TV producer Brad Falchuk . The couple got married in September 2018. 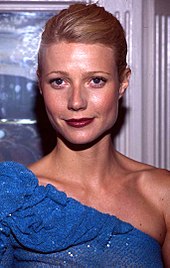