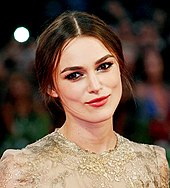 Keira Knightley is the daughter of actor Will Knightley and writer and playwright Sharman Macdonald . It was named after the Russian figure skater Kira Walentinovna Ivanova , who her father raved about. However, her mother made a spelling mistake when filling out the birth certificate, giving Keira Knightley her unusual first name. Keira's brother Caleb was born in 1979.

In 1992 she spent her summer vacation as a ballet dancer on stage. She received her first supporting roles in 1993 in the television series A Royal Celebration and in 1994 in the drama An Outrageous Affair .

The German television audience first saw her in 1998 in the Rosamunde Pilcher film Heimkehr . A year later she made a small appearance as Natalie Portman's doppelganger in Star Wars: Episode I - The Phantom Menace . In 2001 she appeared in the thriller The Hole . Knightley's breakthrough came in 2002 with the British surprise hit Kick it like Beckham . At the age of seventeen she took on a leading role in the remake of Boris Pasternak's novel Doctor Schiwago : she played Lara Antipowa, the lover of the hero portrayed by Hans Matheson .

In late 2003, Knightley appeared in Love Actually as the bride of Chiwetel Ejiofor . In 2004 she played Lady Guinevere in King Arthur . Knightley made another costume film with pride and prejudice . In the film adaptation of Jane Austen's novel , she played Elizabeth Bennet, who initially resisted her admirer, Mr. Darcy. In 2007 she starred in Joe Wright's drama Atonement based on the novel by Ian McEwan . In 2008 she starred alongside Sienna Miller in The Edge of Love . Also in 2008 she played the wife of William Cavendish, 5th Duke of Devonshire, in The Duchess . In 2009 and 2010 she appeared in two short films. In addition, she starred in the two dramas Last Night and Alles ,was haben wir haben dich . In the action thriller London Boulevard , she appeared on the side of Colin Farrell .

In 2012 she starred alongside Steve Carell in the doomsday comedy In Search of a Friend for the End of the World . In the same year she stood in Anna Karenina for the third time in front of the camera for director Joe Wright after pride and prejudice and apology . In 2013 she starred with John Carney , Mark Ruffalo and Adam Levine ( Maroon 5 ), who made his film debut, in the musical film Can a Song Save Your Life? the female lead. She sang her vocal parts herself. In the following year, 2014, she played alongside Benedict Cumberbatch in The Imitation Game - A Top Secret Life , which was nominated for eight Academy Awards and won an Oscar. Knightley herself was nominated for Best Supporting Actress.

From 2003 to 2005 the Irish actor Jamie Dornan was her partner, before that she was in a relationship with the actor Del Synnott (Gwyn - Princess of Thieves) . From 2006 to the end of 2010 she was in a relationship with her colleague Rupert Friend , whom she met while filming Pride and Prejudice . Keira Knightley and James Righton , keyboardist for the Klaxons , got married on May 4th 2013 in Mazan , France . The couple has been together since February 2011. Their first daughter was born in London in May 2015, and their second daughter followed in September 2019. The family lives in Islington, London .

In 2007, Keira Knightley sued the UK newspaper Daily Mail over allegations that she had an eating disorder. Because of the reporting, she worried about future role offers. She also said that she was well aware of the severity of the disease due to cases in her family.

In April 2009, a TV commercial against domestic violence was produced in which Knightley played the lead role. For British television, however, the spot had to be shortened to include the scenes in which the actress who was lying on the ground was kicked.

Keira Knightley has been promoting a French perfume since 2007.

She is one of the top paid actresses in Hollywood, according to Forbes Magazine . Between June 2007 and June 2008 alone, she received fees of 32 million US dollars , placing her in second place behind Cameron Diaz (50 million US dollars). 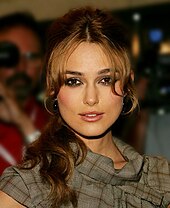 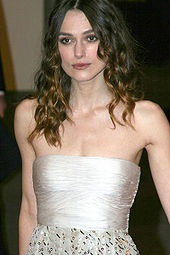 Knightley does not have a permanent German dubbing voice. For some years now, Giuliana Jakobeit and Dascha Lehmann have been cast almost exclusively in alternation; in earlier works they also spoke Marie Bierstedt , Berenice Weichert and Manja Doering .