from Wikipedia, the free encyclopedia
This is the spotted version , flagged on January 20, 2020 . There is 1 pending change that has yet to be viewed. 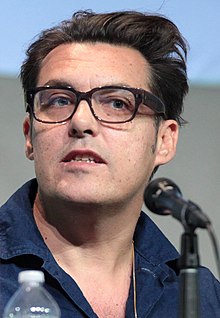 Joe Wright's father was 65 years old when his son was born. His parents both founded Islington's Little Angel Theater , a puppet theater that Wright introduced to the theater at a young age. In his youth he suffered from dyslexia and left school without a General Certificate of Education (GCE), which initially denied him an academic education. After attending workshops at the Anna Scher Theater School, Wright was cast in an RCA film. Through drawings and Super 8 films he was accepted by the Camberwell School of Arts, where he made his first short film Whatever Happened to Walthamstow Marshes in 1991 . In the same year Wright made the jump to the Central Saint Martins College of Art and Design , the famous college for art and design in central London. Here he studied fine arts, film and video until 1994. In 1993 he received a grant from Fujifilm , which enabled him to direct his short film The Middle Ground . For the shooting, Wright held a theater course at the Islington Green School, where he discovered the actors for his short film and some of them were shot.

Joe Wright's first success as a director came in 1997 when he directed the nine-minute short film Crocodile Snap , which is based on a script by James Greville . For the story of a woman (played by Claire Rushbrook ) who tries to leave her abusive husband from the perspective of her young daughter, he and Greville received a nomination for the British Academy Film Award (BAFTA Award) in 1998 , the most important British film film prize and Crocodile snap later by the BBC in television broadcast. In 1998, the 11-minute short film The End was made , which was shown on Channel 4's British television. Two years later, Wright, who is a big fan of the social-realistic director Alan Clarke (1935-1990), directed the television series Nature Boy , in which the youthful David (played by Lee Ingleby ) was more inclined to nature than to the human world to look for his father. The television series received critical acclaim and was nominated for the 2001 BAFTA Award for Best Dramatic Television Series.

After the black humor television series Bodily Farm (2002) in which Timothy Spall played the lead role, Wright had his breakthrough on British television in 2003 with Charles II: The Power & the Passion with Rufus Sewell in the title role. The four-part series, a chronicle of King Charles II of England, who fled into exile because of the English Civil War and triumphantly celebrates his return to the throne after Oliver Cromwell's death, won three BAFTA awards in 2005, including the trophy for the best dramatic TV series of the year. Joe Wright celebrated his high point as a director so far with his movie debut Pride and Prejudice in 2005. The lavish film adaptation of Jane Austen 's novel of the same name with Keira Knightley in the lead role was praised by international critics and was recognized as a "miracle of taste in decor and setting, in skill in casting the roles, in narrative economy ” understood. Pride and Prejudice , Wright's first film with a happy ending , received four Academy Award nominations in 2006 and six BAFTA nominations, including Best British Production of the Year. Joe Wright was named "Most Promising New Discovery" by the BAFTAs and received the London Film Critics' Association Award for Best Director of the Year and the Boston Film Critics Association Award for Best New Filmmaker.

In January 2006, media reports announced that Joe Wright's second feature film would be a remake of George Cukor's The Lady Alquist 's House . As executive producer for the film studio Warner Bros. was Paula Weinstein ( Monster-in-Law ) stated during the screenwriter Abi Morgan should write the movie script. The project failed, however, and Wright filmed a novel by Briton Ian McEwan in 2007 with apology . It tells the story of a 13-year-old girl with a talent for writing (played by Saoirse Ronan ) who misinterpreted a situation in England around 1935 and thus destroyed both her life and that of her older sister and her lover. When casting the roles, the director relied on the pride and prejudice actresses Keira Knightley and Brenda Blethyn , who were supported by James McAvoy , Saoirse Ronan, Romola Garai and Vanessa Redgrave . Atonement celebrated its premiere on August 29, 2007 as the opening film of the 64th Venice Film Festival , where it was also featured in the competition for the Golden Lion , the main prize of the film festival. Although the film did not receive an award, it received a positive response. The Neue Zürcher Zeitung , for example, praised Atonement as a great success and Wright for working with his actors, with whom he usually rehearses individually. The few negative voices denounced the film as “flashy cinematic ready-made goods” and the intricate narrative structure, which months later won the Golden Globe Award for best film drama and the BAFTA Award, but only received the trophy for best film music at the 2008 Academy Awards .

The success in British cinema followed in 2009 with The Soloist Wright's debut in Hollywood , with which, however, he could not build on the previous successes. The drama is a biography about the schizophrenic American cello and violin virtuoso Nathaniel Ayers (played by Jamie Foxx ). Other roles were Robert Downey Jr. and Catherine Keener .

From March to early June 2010, Wright directed the action drama Who is Hanna? with apology actress Saoirse Ronan as the title heroine and Cate Blanchett and Eric Bana in supporting roles. Then he devoted himself to the film adaptation of Leo Tolstoy's novel Anna Karenina . Atonement actress Keira Knightley played the title role , while Jude Law and Aaron Johnson played the leading male roles . Tom Stoppard was responsible for adapting the script .

The fantasy film Pan , shot by Wright in 2015, received very little critical acclaim. The very expensive project, with estimated production and marketing costs of over US $ 250 million, grossed only US $ 128 million worldwide, making it one of the biggest financial film flops of the year alongside Jupiter Ascending and A World Beyond .

Wright then turned to the historical drama The Darkest Hour (2017), which will deal with Winston Churchill's performance at the start of World War II . The main role was played by Gary Oldman .

While filming Pride and Prejudice , Wright began a relationship with actress Rosamund Pike , who played Jane Bennet in the film. In late August 2007, the two announced their engagement during the Venice Film Festival . The wedding was scheduled for May 2008 but was canceled. From 2010 to 2018 Wright was married to the sitar virtuoso Anoushka Shankar ; they have two sons together.