Gary Leonard Oldman (born March 21, 1958 in Lewisham , London ) is a British actor , director and film producer . In the 1990s, Oldman was best known for films in which he played the villain . In the new millennium he succeeded in various roles and was nominated for the first time for the Oscar in 2012 for the leading role in Dame, König, Ace, Spion . For his critically acclaimed portrayal of Winston Churchill in The Darkest Hour (2017), he won the Oscar , Golden Globe Award , Screen Actors Guild Award, and Critics' Choice Movie Award .

Oldman was born to the housewife Kathleen (née Cheriton; 1919-2018) and the welder and former seaman Leonard Bertram Oldman (1921-1985) in the New Cross district of the London Borough of Lewisham . His alcoholic father left the family when Oldman was seven years old. Oldman's older sister Maureen (* 1945) also works as an actress under the pseudonym Laila Morse .

Oldman grew up in south London and has been an avowed fan of Millwall FC and Manchester United football clubs since childhood . One of his idols was the Northern Irish soccer player George Best .

He first attended West Greenwich School in Deptford , but left school when he was sixteen and temporarily took a job in a sports shop. In his youth he taught himself to play the piano by himself and was later occasionally active as a singer . However, after seeing a performance by actor Malcolm McDowell in the movie The Raging Moon in 1971 , he decided to put his musical skills on hold in order to devote himself to acting in the future.

In the mid-1970s, Oldman studied at the Young People's Theater in Greenwich and also kept himself afloat with various part-time jobs. Among other things, he worked as a shoe seller and on a slaughterhouse . He had previously unsuccessfully applied to the renowned Royal Academy of Dramatic Art . After completing his bachelor's degree, he began his career as a stage actor in 1979 at the Royal Court Theater in London . In 1985 he received the Fringe Award for Best Newcomer and the Drama Magazine Award for Best Actor for The Pope's Wedding . 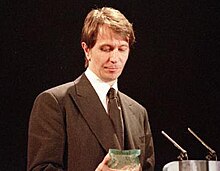 In the early 1980s, Oldman made his first experiences in front of the camera on television, including in Mike Leigh's Channel 4 production Meantime . In 1986 he made his movie debut with Sid and Nancy , a film about the sex pistols bassist Sid Vicious . Critics praised his authentic interpretation of the role. In 1988, he starred opposite Alan Bates in the film adaptations We Think the World of You before in the film drama in 1989 Chattahoochee alongside Dennis Hopper was able to play the leading role. In the same year he played the leader of a hooligan clique in the television film The Firm . In 1990 he starred in the comedy film Rosenkranz & Güldenstern alongside Tim Roth and Richard Dreyfuss .

Also in 1990 he starred in the action thriller State of Grace alongside Sean Penn . The film was his final breakthrough in the US film landscape. In the early 1990s, Oldman moved to the US to advance his career. He had his next major success in 1991 in Oliver Stone's political thriller JFK - Tatort Dallas , in which he played John F. Kennedy's alleged murderer Lee Harvey Oswald . Since then, Oldman has stuck to the image of the villain, which he developed over the next few years in Bram Stoker's Dracula (1992), Léon - The Professional (1994), The Fifth Element (1997), Air Force One (1997), Lost in Space (1998) and Hannibal (2000) embodied.

There is no concrete information about which controversy with regard to the film project is meant and what exactly "Hollywood's black list" is supposed to be. In addition, the relevant documents are missing. - Harpooneer ( discussion ) 15:37, Jan. 8, 2018 (CET)

He was able to celebrate another great success with the role of Commissioner Gordon , whom he impersonated for the first time in Christopher Nolan's comic adaptation Batman Begins in 2005 . He also played the role of the policeman in the two successful sequels The Dark Knight (2008) and The Dark Knight Rises (2012). In 2009 he played the role of a rabbi in David S. Goyer's horror film The Unborn . In the next few years various leading and supporting roles in commercially less successful film projects such as The Book of Eli (2010), Red Riding Hood - Unter dem Wolfsmond , Dame, König, As, Spion (both 2011) and Paranoia - Riskantes Spiel ( 2013). For his role in Lady, King, As, Spy , he received an Oscar nomination for Best Actor .

In the 2013 music video for the single The Next Day from David Bowie 's album of the same name , the actor played a vicious priest who visits a clergy nightclub. In 2014 he had another success with a role in the commercially successful and critically acclaimed science fiction film Planet of the Apes: Revolution . Since 2015, Oldman has worked as a performance capture actor and voice actor for the character of Admiral Bishop in the single player campaign of the computer game Star Citizen directed by Chris Roberts .

Work as a director, screenwriter and producer 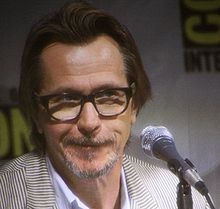 Together with Douglas Urbanski , Oldman founded the film production company SE8 Group in 1996 . Their first joint production was Oldman's directorial debut Nil by Mouth (1997), which is based in part on experiences from Oldman's youth. The relatively positively received film won two BAFTA awards in the categories of Best British Film and Best Screenplay, as well as an Empire Award . Since then, Oldman and Urbanski have collaborated on numerous other projects.

Furthermore, Oldman acted as a producer for the films Plunkett & Macleane - Against Death and the Devil (1999) and character assassination - Beyond the Morals (2000). He also starred in the latter film.

Oldman is known for expanding his roles with diverse accents in almost every film . In interviews and outside of his films he speaks the Cockney - Regiolekt , with whom he grew up.

He was married to actress Lesley Manville in the late 1980s and has a son with her. From 1990 to 1992 he was married to Uma Thurman . During the filming of Ludwig van B. - My immortal beloved (in which he played the role of the composer Ludwig van Beethoven ) he developed his relationship with the co-star Isabella Rossellini , to whom he became engaged in July 1994, from whom he fell but separated again two years later. From 1997 to 2001 he was married to the American photographer Donya Fiorentino, with whom he has two sons. From 2002 to 2005 he lived with the actress Ailsa Marshall . On December 31, 2008, Oldman married singer Alexandra Edenborough in Santa Barbara , California , after a year of separation, Edenborough filed for divorce in early 2015.

Oldman has been married to the author and curator Gisele Schmidt for the fifth time since September 2017 .

Oldman was temporarily in rehab because of alcohol problems. In 1991, for example, after spending an evening together in Los Angeles with his fellow actor Kiefer Sutherland, he was caught drunk behind the wheel.