The city is named after Barbara of Nicomedia , who is considered a saint in the Catholic Church. On December 4, 1786 the Mission Santa Barbara , the "Queen of Missions", was founded as the tenth "pearl" in a long chain of missions (from Los Angeles to San Francisco to Sonoma ) northwest of Los Angeles by Padre Fermin Lasuen. In the 21st century, Santa Barbara is a large city, a tourist attraction and a celebrity residence. Compared to other Californian cities, the Spanish-Mexican influence was retained in the cityscape, even after it was rebuilt after an earthquake struck Santa Barbara in 1925 . The city planners decided to restore the destroyed buildings in their original style.

In 1942 , a Japanese submarine bombarded the Santa Barbara coast and the Ellwood Oil Field , the first bombardment on the North American mainland during World War II and sparking fears of invasion.

The city became the most expensive residential area in the USA in the 20th century. The average house price is 1.13 million US dollars (as of 2006). This is more than double the average price in California, which is $ 564,430.

To the east of the city is Montecito, a district that is one of the richest in the United States. The median income here is $ 70,077, more than three times the national average ($ 21,587). Because of the quiet, beautiful and representative area, many celebrities and wealthy retirees have settled there.

The city is located about 137 km northwest of Los Angeles, right on the coast of the Pacific . It is located in a hilly country rising slightly to the north between the Santa Ynez Mountains in the north and the Santa Barbara Canal in the south, which separates the American continent from the offshore Channel Islands .

Because of its Mediterranean climate , this coast on the south side of Santa Barbara County is often referred to as the "American Riviera". The average annual rainfall is 450 mm.

A vegetation gradient can be determined from south to north. It ranges from sagebrush bushes along the coastal strip to hard foliage bushes ( chaparral ) to mostly loose oak and mixed oak forests on the mountain slopes. Dominating Quercus agrifolia and other Hartlaub oaks and Pinus sabiniana , also known as pine digger known.

Sea birds can be seen on the beaches. The pier is plagued by begging young pelicans . The Santa Barbara Canal is used by the gray whales as a migration route. Blue whales can also be found there in summer . Whale watching boat tours depart from Santa Barbara Harbor.

According to the 2000 survey, there are 92,325 residents, 35,605 households and 18,941 families in the city. The population density is 1,878.1 inhabitants per km². 74.04 percent are White , 2.77 percent Asian , 1.77 percent African American , 1.07 percent Native American, and 0.14 percent Pacific Islander. 16.37 percent of the residents of Santa Barbara are of other ethnic origins and another 3.85 percent are descendants of several ethnic origins not listed above. The proportion of the population of Hispanic origin within the various races is 35.02 percent.

Also worth mentioning is the large proportion iranischstämmiger population, about one in six is of Iranian descent, a higher density is only available in Beverly Hills.

Overview of the city from the tower of the courthouse 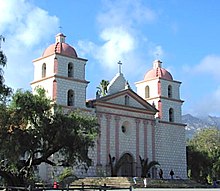 State rail company Amtrak offers six daily trips on the Coast Starlight and Pacific Surfliner to and from Los Angeles Union Station , as well as fewer connections to northern California. The drive to Los Angeles is similar to that by car. The 1902 train station is near the harbor and Stearns Wharf and is listed as a cultural monument on the National Register of Historic Places . With the Pacific Surfliner ticket you can use Santa Barbara local buses for free on the same day. Bicycles can be taken along for free in the Pacific Surfliner if you reserve in advance.

Local traffic is provided by the Santa Barbara Metropolitan Transit District company and with buses on 26 lines. The junction of almost all lines is the Transit Center ( ZOB ) in the city center (Chapala St.), the electric buses of the Downtown & Waterfront Shuttles run there from the train station about every 15 minutes. On all buses, two bicycles per bus can be carried free of charge on the front luggage rack.

The network of cycle paths in Santa Barbara is well developed.

The Greyhound bus station is located on the station forecourt.

Santa Barbara has partnerships with the following cities (as of June 2017):