The Vossische Zeitung was a nationally respected Berlin newspaper , the publication of which had to be stopped in 1934 due to the political situation. She represented the positions of the liberal bourgeoisie . In the Berlin press landscape, it played a historically well-founded special role: it was - beyond its direct predecessors - the city's oldest newspaper. The name goes back to the interim owner Christian Friedrich Voss from 1751 to 1795, but has only been official since 1911.

Beginnings of the newspaper industry in Berlin

When regular mail connections had developed in the 16th century, written or oral messages were transmitted from distant places by mounted postmen; they first reached the postmasters ; in Cölln in Berlin was the electoral - Brandenburg Post, Courier master Christoff Frischmann. He collected the news he received and passed it on in handwritten copies on a case-by-case basis - to the electoral court , to interested scholars and wealthy citizens. Finally, the news acquisition was systematized, Frischmann was commissioned to maintain contacts throughout the “ Holy Roman Empire of the German Nation ” and to collect news at all important locations. His first printed newspapers came out in 1617, the oldest surviving copy bears the number 36 and provides news from the period from August 16 to September 5. The newspapers appeared in a weekly rhythm, which was not always regular, each had eight pages in the small octave format (a book format , 18.5 cm high) and were usually passed on to the next reader after reading.

Christoff Frischmann and his brother Veit initially called their newspaper editions "Avisen", then "Berliner Botenmeister Zeitung". The copies from 1618 already contained correspondence from Amsterdam , The Hague , Cologne , Rome , Venice , Prague and Vienna . Frequently attacked censors in reporting one, especially because of the pro- Protestant attitude during the Thirty Years' War - the Catholic - imperial court in Vienna prompted the Brandenburg electors for redress. The paper could not appear for a while. Worn down by the constant concern for the existence of his newspaper, Veit Frischmann gave the concession in 1655 to his printer Christoph Runge, who gave the paper a new title in 1658: “Berliner einkommende Ordinar- und Postzeitungen”. In 1704 the printer Johann Lorentz bought the newspaper from Runge's widow, his privilege was immediately confirmed by King Friedrich I. Lorentz called the only newspaper in Berlin now "Berlinische Ordinaire Zeitung".

The comfortable monopoly position was threatened a little later. The printer Johann Michael Rüdiger, who moved from southern Germany at the end of 1704, received permission from the king to publish a “weekly diary”. Lorentz objected and won the lawsuit after two years - the new concession was withdrawn. After 1713 the situation changed again. Friedrich Wilhelm I (the soldier king) had begun his reign, traditional privileges were checked and Lorentz was only given a limited license that could be revoked at any time. Now the son of the old competitor, Johann Andreas Rüdiger, made a new attempt. In a letter to the royal court, he pointed out that the printer Lorentz had "enjoyed his privilege for many years for free"; With considerable monetary and material contributions, he was able to induce the king to cancel Lorentz's newspaper license with effect from February 25, 1721 and to transfer it to himself. Rüdiger published the newspaper, now as the “Berlinische Privilegirte Zeitung”, without interruption and without significant changes, so that continuity was maintained for the readers.

The various changes in ownership have led to uncertainties regarding the “date of birth” of the Vossische Zeitung. Some sources mention the year 1721. The paper itself celebrated its 200th anniversary in 1904 and last mentioned the corresponding date of foundation on its front page. Both initial dates refer to the Rüdiger family of publishers. Most of the time, the age is based on the (almost) uninterrupted existence of the newspaper since 1617, when Christoff Frischmann first published it.

Crown Prince Friedrich, who later became King Friedrich II. (Friedrich the Great), found the newspaper boring. Because his father, King Friedrich Wilhelm I, had decreed that no expressions of opinion, let alone critical ones, were allowed to be printed, the sheet only contained insignificant reports, mainly from court celebrations, receptions, criminal cases and executions . The lack of competition also gave no reason to improve the journalistic quality of the paper. But already on the second day after his accession to the throne in 1740, Friedrich II commissioned his bookseller Ambrosius Haude to publish two new newspapers in Berlin, one in German, the second - which lasted only a year - in French . In June 1740, for example, the “Berlinische Nachrichten von Staats- und schehrte Dinge”, which later became Spenersche Zeitung, appeared . During the reign of Frederick II, in 1750 and 1783, two other newspapers were approved, including the Gazette littéraire de Berlin .

Regarding the question of press censorship, the king had expressed the opinion early on that " if the gazettes are to be interesting, they don't have to be annoyed ". In 1742 censorship was lifted. This was practiced again during the first Silesian Wars and was formally reintroduced in 1749, albeit with the royal mandate to keep interference with freedom of the press as low as possible under wartime conditions. At that time, the Berliner Blätter enjoyed greater freedom than the newspapers in other German countries and were able to disseminate the ideas of the Enlightenment , to which Friedrich II also felt obliged, almost unhindered.

From Voss to Ullstein 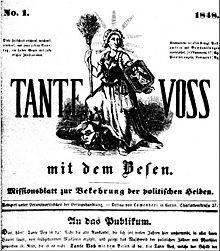 Pamphlet against the Vossische Zeitung, 1848

After Johann Andreas Rüdiger died in 1751 without a male heir, his son-in-law, the bookseller Christian Friedrich Voss , took over the newspaper. It was now published three times a week, had four pages each, was printed in 150–200 copies and only sold in bookstores. Very soon the paper was only called “Die Vossische” by the Berliners, and popularly also called “Aunt Voss”. Since 1785, its real title has been “Königlich Privilegirte Berlinische Zeitung von Staats- und Schehrten Dinge”, and in 1806 the headline “Im Verlage Vossischer Erben” was added. This originally referred to Voss' daughter Marie Friederike, who was married to Karl Gotthelf Lessing , a brother of the poet Gotthold Ephraim Lessing . After a long legal dispute, she took over the newspaper in 1801 and thus brought it into the possession of the Lessing family ( Carl Robert Lessing ), who continued the company.

Around 1800 the newspaper appeared with 16 pages, since 1802 with an economic and advertising section , which was received very positively - it had become more extensive and varied, but remained because of the now again strict censorship, which did not criticize the principles of religion , State and public order allowed, journalistically quite superficial. During the Napoleonic Wars , the newspaper's editors fled, as did King Friedrich Wilhelm III. - to Breslau in Silesia . There the paper appeared temporarily as the "Silesian privileged newspaper". Between 1824 and 1875 - long back in Berlin - it was published daily, then twice a day.

The paper represented the interests of the liberal bourgeoisie. It had campaigned for the abolition of press censorship since 1843 and was clearly on the side of the liberal forces in the revolution of 1848 . The entire editorial team took part in the funeral of the “ March fallen ”, the 183 civilian victims on March 18, 1848 in Berlin . On the occasion of the lifting of press censorship that same month, a special edition of Joy was published in Berlin (quote: “Among all rights, which we have been granted and which we hope to be fulfilled, the liberated thought is the noblest, because in it lies the pledge for everything to come " ). In the course of the conservative counter-revolution, however, after democratic newspapers had been banned and printing plants had been closed in November 1848 , the Vossische Zeitung put its progressive stance into perspective and had to put up with criticism and ridicule for it.

Around the middle of the century, the newspaper was the market and opinion leader in Berlin, but lost this position over the next few decades. Frequent differences between the shareholders blocked the technical and journalistic development. Towards the end of the 19th century, the "Vossische" maintained a solid position on the Berlin newspaper market, but by no means reached the editions of the new mass newspapers from the Ullstein , Scherl and Mosse publishing houses .

Ownership had become more complicated; the company shares now belonged to different members of the Lessing and Müller families and were later partly taken over by the newspaper entrepreneurs Rudolf Mosse and August Huck. The Vossische Zeitung was published by Ullstein Verlag on January 1, 1914. As early as 1910, the paper was given the name Vossische Zeitung , the previous main title only remained as a subline. After the end of the monarchy in Germany the reference to the royal privilege became irrelevant; In 1918 it fell away - the last of the numerous title changes. The papers of the Ullstein publishing house now spoke out in favor of the republic , and an editorial in the Vossische Zeitung called for a representative national assembly to be called quickly .

During the Weimar Republic , the newspaper was the mouthpiece of democratic and liberal forces. It also offered a platform for liberally oriented Russian emigrants. On its front page, the newspaper published a long obituary for the former Senator Vladimir Dmitrijewitsch Nabokow , who was an opponent of the tsarist west and who was murdered by tsarists in Berlin . The German translation of the novel “König, Dame, Bube” by his son Vladimir Nabokov also appeared in it .

On March 31, 1934 the Ullstein Verlag stopped the publication of the newspaper. Seven days earlier the publisher had stated in a short note on the front page - “To the readers of the Vossische Zeitung” -: “In our opinion, the task of a paper in the style of the Vossische Zeitung is over. So we made the painful but logical decision of our own free will to give up the Vossische Zeitung and not to let it appear after the end of the month ”. This cautious formulation does not reveal the drama of the situation at the time. In fact, the censorship authorities of the National Socialist regime had long since significantly impaired the work of the newspaper, and numerous unpopular journalists, including many Jews , had been driven from their positions. A few weeks later the Ullstein publishing house, including the newspapers that were still published at the time, fell victim to Aryanization .

Prominent personalities had worked as authors for the Vossische Zeitung. Gotthold Ephraim Lessing worked as a reviewer from 1751 to 1755 , Christian Friedrich Voss had entrusted him with the editing of the “learned article”, and in 1751 Lessing published the monthly supplement “Latest from the realm of wit” for nine months. The writer and novelist Willibald Alexis was a temporary employee of the paper and supported it in its struggle for freedom of the press in the run-up to the bourgeois revolution of 1848. The historian Johann David Erdmann Preuss , a friend of Fontane , made numerous contributions to the history of Frederick the Great and his court in the years 1860–1865 . Between 1870 and 1890 Theodor Fontane himself wrote theater reviews of the performances of the Berliner Schauspielhaus for the "Vossische", his temporary colleague and later successor was the writer Paul Schlenther . In 1908 the deputy editor-in-chief EM Grunwald moved to Constantinople , where he took over the editor-in-chief of the newly founded Ottoman Lloyd , which was financed by the Federal Foreign Office , the S. Bleichröder bank and the Baghdad railway financiers . From 1918 to 1930 the journalist Georg Bernhard was editor-in-chief. In the 1920s Richard Lewinsohn - under the pseudonym More also employee of the " Weltbühne " - headed the business editorial department , Monty (Montague) Jacobs became known as a columnist and theater critic. In the spring of 1924 Kurt Tucholsky went to Paris as a correspondent for the Vossische Zeitung and the “Weltbühne” . Paul Schlesinger wrote his exemplary court reports under the acronym Sling between 1921 and 1928, thus establishing a new journalistic genre . As of November 1928, the novel was on the Western Front by Erich Maria Remarque published as a preprint in the Vossische newspaper.

The newspaper appeared in the course of time under the following titles:

Via the Vossische Zeitung