This article was entered in the editorial right for improvement due to formal or factual deficiencies in quality assurance . This is done in order to bring the quality of articles from the subject area law to an acceptable level. Help to eliminate the shortcomings in this article and take part in the discussion ! ( + )

The concept of crime (from the Latin crimen "accusation, indictment, guilt, crime") is essentially based on the legal definition of the crime . While the “criminal offense” or the material term of crime is more likely to be measured against individual behavior, “criminality” describes the offenses as an overall phenomenon (macro-phenomenon).

In critical criminology, on the other hand, in accordance with the above-mentioned ambiguity of the Latin term: accuse-crime, under "criminality" the entirety of the actions and interactions between the institutions responsible for law-making and enforcement on the one hand and the individuals responsible for breaking the law and affected by legal breach on the other understood (see also labeling approach ).

Any form of encroachment on the legal interests of another person is therefore designated as crime . Crime is thus the decisive antagonist for the harmonious coexistence of people and their morals within and outside a group, a society, a people or between peoples.

Although determined at the core, the definition offers diffuse contours; Often negligence offenses are not designated as criminality, since the perpetrator acts here without intent and therefore not a priori criminal.

Another problem is the delimitation of the terms “ delict ”, “ deviance ” or “ delinquency ”, which are sometimes used synonymously, but are actually not congruent.

The concept of the offense is usually based on the terminology of the criminal offense and appears more frequently , especially in the context of juvenile criminal law . It must be clearly distinguished from the civil law conception of tort law . In addition, it is not understood as a non-judgmental term, but as a term with “negative connotation”. The "delinquency" penetrated the German-speaking area from American criminology . Either it is used as a counterpart to the "offense" (among young people) or as a counterpart to brightfield crime, then delinquency means crime in the darkfield. Brightfield crime is criminal offense that is reported by or to public control bodies, darkfield crime is crime that is not reported ( dark figure ).

“Deviance”, after all, is not just crime, but any behavior that deviates from the norm. It includes both regulatory offenses and simply inappropriate social behavior.

Because it is a grave social problem, criminology spent decades looking for a commonly accepted explanation of the causes of crime. The prevailing opinion is that crime can be found in all age groups, in all social systems and in all places (“ubiquity thesis”). According to this, crime can also be found independently of the political system. Even if crime was viewed as a bourgeois relic of the pre-socialist system in the early days of the GDR , crime was to be found in every socialist state in the late 1980s.

Both individual and environmental factors (e.g. the plant-environment view) are used. So far none of the many theories has really been able to prevail; all theories are ultimately inappropriate.

While criminology seeks explanations, criminology as an auxiliary science makes use of technical ("forensic") methods to fight crime (not prevention !), That is, the investigation of criminal offenses. In Germany, the public prosecutor's offices and their investigating officers (above all police officers) are called upon to provide information . In addition to the usual methods, the field of clarification is increasingly shaped by experts, namely chemists, biologists, physicists, engineers, psychologists and medical professionals, since the clarification can no longer be managed solely through the evaluation of witness statements, but extensive evidence securing experts for Need evaluation.

In this respect, it can be seen that technical progress is initially a hallmark of crime, later the law enforcement authorities adapt to it. With the revolutionary discoveries of dactyloscopy and PCR for DNA analysis, euphoria broke out in each case that crime would be wiped out in the future because the clearance rate would rise to 100 percent. These euphorias were always disappointed.

Subdivision according to severity assessment

In Germany, subdivisions according to severity are in the following order: minor offenses, light crime, medium crime, serious crime and serious crime.

The term mass crime is often used. The term is scientifically controversial. Related, but not congruent and explicitly differentiated by some authors, is the term everyday crime (according to a definition: "Crimes that occur in the everyday life of the perpetrator"). Mass crime is the statistical term for the most frequent crime cases, which are separated from organized crime and serious / violent crime . It is characteristic that these crimes occur very frequently and are perceived by the perpetrators as minor .

These include above all:

The term petty offense is used colloquially for criminal or improper actions that are viewed by society as dishonorable or reprehensible; it is not a legal category. Driving too fast in traffic , driving through the red traffic light , making black copies , tax evasion and fare dodging are often viewed as minor offenses.

Serious crime is an indefinite term that mostly includes murder or gang crime . As a rule, it is used in Germany to describe criminal offenses that are listed in Section 100a of the Code of Criminal Procedure (StPO). 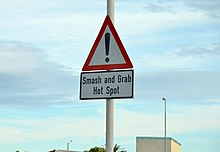 Street crime includes all criminal offenses with a crime scene on public roads, streets or squares or an important reference to them, e.g. B. Pickpocketing .

Crime has been recorded statistically in many regions of the world for at least decades. One example is the German police crime statistics . A counterexample are Africa and Oceania, where - if at all - statistics have only been available for a few years.

One problem with crime statistics is that they only measure brightfield . The reporting behavior of the population or the intensity of persecution by the police can change without a change in the extent of the actual crime. Darkfield research tries to close this gap.

One observation made in the statistical development of crime is the so-called crime drop , a clear decline in crime recorded by the police in Europe and other regions of the world since the early 1990s, which is hardly known to the public.

The role of the media

Reporting and commenting on crime plays an important role in the mass media . Offenses and suspicion of criminal offenses with the relevant investigation and possibly subsequent legal proceedings are central news value . Traditionally, they are among the topics that the media pay particular attention to and that arouse great interest from the public . The communication studies observe these substances as one of its fields of research for a long time very strong.