The title of this article is ambiguous. Further meanings are listed under Murder (disambiguation) .

Murder generally stands for a deliberate homicidal offense , which is socially ascribed a particular worthlessness. As a rule, historical and current criminal justice systems differentiate between simple or less qualified deliberate killing and a particularly reprehensible form, according to German usage, “murder”. However, the definition and systematic status of the second type of killing, which is usually sanctioned with a higher degree of punishment, varies considerably between the different legal systems.

From the point of view of the dogmatic criminal law system, “murder” is viewed in different legal systems as a basic offense , a qualification or a sui generis offense . With regard to the definition, the distinction relates in most cases either to the “ethical element of the overall picture of the act” or to the “psychological element of decision making”. In the latter case, murder often only differs from other homicides in terms of the mens rea , the subjective fact. This demarcation between affect and premeditated killing, which goes back to Roman law and which is characteristic of the psychological moment of decision-making, is viewed by parts of literature as “universal law” ( Kohler ). However, this is doubtful, as there is no definition of murder that has been recognized across all ages and cultures. In international criminal law , murder is sometimes equated with intentional killing because of the resulting difficulty in delimitation.

The incidence of murders in western countries fell from 20 to 70 per 100,000 inhabitants per year to about one case from the late Middle Ages to the present. Since the beginning of the 1990s, statistics have also shown a decline in crime in other regions of the world .

The distinction between murder and other homicides is traced back in literature to the ancient Jewish and Greek legal traditions. A fundamental ban on murder results from the Sumerian ethics, see Codex Ur-Nammu . Similar prohibitions can be found in the Ten Commandments of the Israelite religion. Mosaic law differentiated between murder and manslaughter.

In Drakons laws of murder forces, ie the killing with premeditation ( ek pronoia ) and planning ( bouleusis ) in the opinion of Kieler legal historian Richard Maschke of blood revenge, which could escape the murderer only by fleeing. In contrast to cover the payment of a manslaughter was wergild possible. As a prerequisite for revenge or private enforcement, a compulsory judicial process ( Areopagus ) became necessary.

Based on Roman law, in which the homicidium praemeditatum corresponds most closely to murder, the distinction between affect and forethought became characteristic of the differentiation from other homicides in many legal circles.

In the German Middle Ages, however, murder was regarded as the secret killing as opposed to the killing in open combat man against man. The secrecy could also be expressed in the choice of weapons, e.g. B. Dagger instead of sword. The reason for the punishment is said to have had to do with the fact that the perpetrator wanted to evade responsibility (blood revenge). On the other hand there was the "honest manslaughter".

This legal tradition was continued during the National Socialist era with the introduction of the murder feature of treachery in the criminal law reform of September 4, 1941. The "Germanic" ethical term, which presupposes a particularly reprehensible or particularly dangerous inspection, replaced the Roman legal term of murder that had been dominant since the Constitutio Criminalis Carolina , which was based on deliberation or forethought, i.e. psychological aspects. The concept of treachery has remained in German Section 211 of the Criminal Code to this day.

Differentiation between murder and other homicides

As a legal term, murder is characterized by very different legal dogmatic characteristics and requirements, depending on the legal system:

The different societal evaluations associated with the distinction between murder and manslaughter in different cultures are partly discussed in cases of honor killing .

In international criminal law , the differentiation between murder and intentional homicide is controversial. The differentiation is often even abandoned, for example in the Čelebići case before the International Criminal Court for the former Yugoslavia , in which willful killing and murder in civil war situations were equated. The term murder from the English version of Article 7, Paragraph 1 a) of the Rome Statute of the International Criminal Court is translated as “intentional killing” in the official German translation in the Federal Law Gazette.

In Friedrich Kirchner's dictionary of basic philosophical terms, based on Roman law, murder is defined as the deliberate and unauthorized killing of a person. For the neo-Hegelian (and later National Socialist) legal philosopher Julius Binder , the distinction between murder and a state-ordered execution lies in the fact that the latter is a “probationary act”, while the murderer's “special will” is directed against the general will of the law.

The legal economist Richard Posner is of the opinion that the sentence "murder is wrong" ("murder is wrong") is tautological , as with the statement only analytically confirmed what in the term murder (in the sense of unlawful killing) is purely definitionally Rating would be included. Using the example of murder and bribery, he shows that criminal offenses vary greatly between cultures. Therefore a form of relativism is appropriate and academic moral philosophy is not suitable for coming to concrete statements. 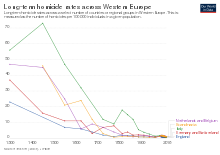 Long-term rate of homicide in various countries of Europe

It has been known in criminology since the early 2000s that there has been a more or less steady decline in the frequency of murders in Europe, at least since the late Middle Ages. Cambridge professor Manuel Eisner published a corresponding study in 2003.

The diagram is essentially based on Eisner's numbers. In addition, Our World in Data has made additions and updates. The values ​​are given per 100,000 inhabitants per year (" frequency number "). There is a dramatic decrease in murder rates from the late Middle Ages to the present day. The incidence fell from 20 to 70 per 100,000 inhabitants per year to about one case.

The statistical recording of murders is used in criminology to make comparisons over long periods of time and across geographical regions (including worldwide). Murder is also used as an approximate value ( proxy ) to estimate other levels of crime, in particular violent crime . Such comparative studies led to the discovery of a decline in crime not only in Europe, but also in other regions of the world.

Long-term development is similar to other areas of social progress. For example, there have also been major improvements in life expectancy , child mortality , literacy and fewer wars since the Enlightenment .