The Mecklenburg miller Kohne lost nine of his children in just two weeks in 1604. On the epitaph donated in memory of the children are depicted with white shrouds .

Child mortality quantifies the proportion of children who die within the first five years of life, based on 1,000  live births . The mortality in the first year of life is called infant mortality . According to UNICEF , malnutrition is the leading cause of child mortality.

Perinatal complications are the leading cause of child mortality. More than 50% of this is related to malnutrition, especially in developing countries. In sub-Saharan Africa , malaria and AIDS are also responsible for a large proportion of child mortality. According to UNICEF , diarrhea and pneumonia are responsible for almost a third of the deaths among under five year olds worldwide, the equivalent of over two million deaths. 90% of these deaths occur in sub-Saharan Africa and South Asia .

In hunter-gatherer societies and well into historical times, mortality was so high that around 27% of children did not survive the first year, 47% died before reaching puberty. 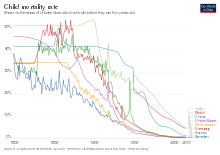 With the decline in poverty and increasing knowledge and supply in the health care system, child mortality fell very rapidly worldwide: from 18.2% in 1960 to 4.3% in 2015. The efforts of the United Nations Millennium Development Goals supported this process .

Long-term development is similar to other areas of social progress . For example, there have also been major improvements in life expectancy , literacy , security and fewer wars since the Enlightenment .

In 1870, almost 250 out of 1,000 children died in Germany. There were strong regional differences. In the 19th century, for example, mortality in the Danube region was around 35%, in southern Baden, the Rhine plain and northern Württemberg it was less than 20%. It should also be noted that these numbers are not statistically accurate. For example, the data collection period was not always defined as the first five years of life, or for religious reasons, stillborn children were declared as postnatal deaths.

The most common cause of death was diarrhea, whereby children who were not breastfed were particularly at risk. Poorer classes of society had a higher mortality rate than rich.

Development of child mortality in Germany (deaths per 1000 births)

Child mortality in Germany fell to around 160 by 1910, to below 100 in 1930 and to around 25 in 1970. The reason for the decline was growing prosperity , consistent breastfeeding, and advisory, social and hygienic measures, as well as pediatrics . The decline from 1970 is largely due to further developments in obstetrics and perinatal medicine.

In Germany there are regional differences in infant mortality. In 2004, 5 children per 1000 births died in North Rhine-Westphalia, with an unequal distribution of 3.3 in the Rhein-Sieg district to 8.7 in Gelsenkirchen in the state itself. There were also differences according to nationality. In North Rhine-Westphalia, for example, 4.6 children per 1,000 births to parents of German nationality died, but 11.1 to parents with foreign nationality. In Baden-Württemberg and Bavaria the mortality rate was 3.4.

According to UNICEF data from 2009, 8.8 million children under the age of five died each year, many of them from malnutrition or diseases that could be easily prevented / treated. 40% of all deaths occurred in the first 28 days of life. Pneumonia, diarrhea and malaria are the most common diseases. By 2012, the number had dropped to around 6.6 million children under five. 44 percent of them died in the first 28 days of life. The most common causes of death were birth complications, pneumonia , diarrhea, and malaria .

According to the WHO, the lowest child mortality rate is found despite large variations between countries in the European Region. For every 1,000 live births there are 7.9 deaths within the first five years of life (2010). Most child deaths are recorded in sub-Saharan Africa and South Asia, with around half of all deaths recorded in five countries: India, Nigeria, the Democratic Republic of the Congo, Pakistan and Ethiopia. In all of these countries there are large differences in the health status of the population - both between rural and urban areas and between rich and poor.

However, there is also progress. Significant successes have been achieved in some of the poorest countries. For example, Malawi has cut its child mortality rate by almost half within 20 years. Measures were: increasing the number of midwives, a significantly improved vaccination rate and investments in improved child nutrition.

In Venezuela, on the other hand, child mortality rose by more than 30% in 2016 due to the severe supply crisis after years of mismanagement.