The death rate or mortality rate is the ratio of the number of deaths to the average population of a population. 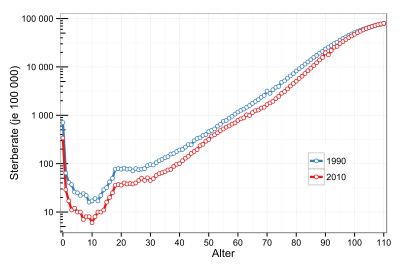 According to the birth risk, the death rate drops to its minimum value for eight to ten year olds with approx. 20 deaths per 100,000 people of the age group per year (tpj = deaths per year (per 100,000 people)), see diagram. At almost 50%, accidents are the most common cause of death in this age group. For 15 to 20 year olds, accidents are also the main risk (40  tpj ), followed by murder (approx. 18  tpj for the USA, 40  tpj for South Africa, 5  tpj for Germany) and suicide (12  tpj ). With increasing age, the suicide rate and the frequency of accidents remain almost unchanged, while illnesses make up the main part of the death rate of 800  tpj among 50 to 60 year olds.

Abraham de Moivre (1725) approximated the age-dependent mortality rate through a hyperbolic increase in the risk of death, limited by a maximum age. Benjamin Gompertz (1824) suggested an exponential increase in mortality, which reflects the observed data well from the age of 30. Refined models introduce additional parameters.

Modeling according to Gompertz

It denotes the mortality at the age of 30 years. An adjustment for the parameter provides a value of , which corresponds to an MRDT of years. The factor is called the Gompertz death coefficient. Studies have shown that the MRDT has typically been between 7 and 9 years in Australia, the United States, Japan, and Northern Europe from the mid-18th century to today. Therefore the value is often estimated at 8.

A general probability of death is often derived from the mortality / year for a risk assessment. For example, in Germany with a population of 80 million, around five people die each year from lightning strikes. Assuming an age of 80 years, the risk of dying from lightning within the 80 years is 1: 200,000. The risk of traffic accidents in Germany is accordingly 1: 150. After all, the general risk of dying within 80 years of life is 1: 1.25 = 80%.

The main influencing factors for mortality are:

The standardized mortality rate deals with the data on the deaths of groups of people, which are made mathematically comparable with regard to age, gender, etc.

The birth rate and death rate are important parameters for determining the age distribution of a society and population dynamics in general.

The death rate plays a role in estimating seasonal flu and pandemics . The mortality is compared with the mean values ​​of previous years without the epidemic and in this way excess mortality is determined that can be assigned to the epidemic. From 2008 DG Sante supported the establishment of the Euromomo project for pan-European monitoring of mortality. It collects data from 18 European countries, the four parts of the United Kingdom and two German federal states continuously and promptly in order to make the effects of seasonal influenza or a pandemic on mortality rates visible across national borders. The project is now also receiving support from the European Center for Disease Prevention and Control (ECDC) and the World Health Organization (WHO).