Growth model is a redirect to this article. For growth models of the national economy see growth theory .

Natural, but also most artificial systems, consist of several types, between which there are various interactions:

A distinction is made between two groups of factors that limit the density of a population:

They are independent of the number of individuals that populate a biotope .

The strength of their effects depends on the current population density. 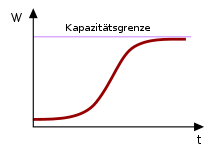 One form of density-dependent growth is described by the logistic equation .

In nature, the capacity limit is influenced by the following factors:

Note: Not all phases have to occur in a real population. In the graphic, the downward branch in phase I shows, for example, that the population can die in phase I. The turn to the right in Phase VI indicates that population decline does not have to lead to extinction.

Phase I: lag phase ( to slow down), start-up phase, zero growth at a low level

The population size is far from the capacity limit. The birth rate is roughly equal to the death rate. There is no shortage of resources, density-dependent factors practically play no role, there is no competition. The birth rate is low, because with this low population density, intra-species encounters are random. The density-dependent mortality from predators only plays a minor role, as there are enough hiding places in the habitat for the few individuals. Infectious diseases also have little effect due to the rare intra-species encounters.

The birth rate is higher than the mortality rate.

Development of the sheep population in Tasmania

The high birth rate is offset by a high density-dependent mortality rate (intra-species competition, stress, epidemics, etc.). There is maximum occupation of the habitat, the resources are used optimally without exhausting them (see load-bearing capacity of habitats ). The population density fluctuates around the value K , the capacity limit. Influences independent of density (e.g. seasons) lead to an oscillating or (in the case of unfavorable habitats with strongly fluctuating environmental influences) a fluctuating course. The larger a population, the more stable this stationary phase is. An overhang increases the death rate and / or lowers the birth rate in the short term. It can be reduced by emigration (example: lemmings ).

The birth rate is now lower than the death rate. With small populations, random fluctuations can lead to extinction. A lowering of the capacity limit, for example through environmental changes or the immigration of new predators, can bring about a new equilibrium at a lower level.

A relatively simple case arises from interactions between two species that are in a predator-prey relationship . This case is classically described by the Lotka-Volterra rules .

More complex relationships result from the interaction of several species. There are approaches to describe and simulate such relationships with the help of mathematical models .

Population as a system

In the following, a mathematical modeling is to be developed based on considerations of system theory . It is first assumed that the resources for the population are unlimited. In contrast to some references, the birthrate and mortality rate are viewed as internal control variables . A change in population, for example due to birth, is therefore not perceived as a result of an influx from outside. (This would be more the case with immigration). Interactions with the environment in the form of immigration or emigration are also not taken into account.

In general, such systems are represented by partial differential equations such as B. the Fisher equation . Special cases of this equation are dealt with below.

Population as an isolated system with no reaction

Influence of the birth rate

Only the influence of the birth rate on the rate of change of the population size N is considered:

This results (through integration ) under the condition that the birth rate is constant ( ) for the population size at any point in time t with the output variable N ( t = 0) = N 0 :

This results in positive linear growth , the speed of which depends only on the birth rate: the higher the birth rate, the faster the growth.

This system can be used as a model for insect states ( bees , ants , termites ) or other animal populations ( wolf packs ) in which only one female gives birth, but neglecting the death rate. However, it should not be forgotten that modeling leads to continuous growth, which in nature takes place in discrete steps. The birth rate is also likely to be constant only temporarily under ideal conditions.

Influence of the death rate

The mortality rate is:

This results in negative linear growth.

The extinction time, i.e. the time when the population became extinct, can also be calculated.

There is no equivalent for this in nature, since the death rate always depends on the population size. A regular removal of animals, for example from a herd of cattle for slaughter, would already correspond to the change in an open system.

Influence of birth and death rates

If the birth and death rates are taken into account at the same time, the change in the population over time results from:

Insertion of equations (2) and (4) and subsequent integration give:

Although the growth is still linear, whether the population increases, decreases or stagnates depends on the size of the birth and death rate:

Population as an isolated system with retroactive effects

In nature, birth and death rates depend on population density and the capacity of the ecosystem.

For the rate of change of the population size due to the death rate alone we get:

The inclusion of the constant birth rate independent of the population     density gives:

Integration results in the equation

This system can change into a state of equilibrium different from N 0 . Equilibrium prevails when exactly as many are born as also die again, if so , or even if the rate of change is the population size .

From equation (10) the following results for the population size in equilibrium (equilibrium):

When the system is in equilibrium from the beginning and therefore in a stationary state. Despite growth through birth and loss through death, the population density does not change; there is zero growth. Otherwise the state of equilibrium is only reached (mathematically) with . The point in time from which one can practically speak of equilibrium could be calculated by stipulating that a minimal difference in comparison to N (for example 0.01%) is already regarded as an equilibrium situation.

Half-life of the equilibrium curve:

Based on the enzyme kinetics , a time could be calculated which corresponds to the Michaelis constant. t ½ N eq would be the point in time at which the population has reached half the equilibrium size:

Birth and death rates depend on population size

For the rate of change of the population size due to the birth rate we get:

This results in the rate of change in population size, taking into account the birth and death rate:

This system does not have an equilibrium state different from N 0 .

These relationships are described in a simplified manner by the model of logistic growth (Verhulst):

The model agrees quite well with the observations for organisms that multiply by dividing into two ( bacteria , yeasts and other eukaryotic unicellular organisms ) and higher organisms that have a low rate of reproduction per generation and whose generations overlap.

An extension of the formula of logistic growth to include time delays also results in periodic fluctuations in the model:

= Response time delay of the population, for example when the capacity limit is exceeded

Predator-prey system according to the Lotka-Volterra equation :

K ( i ): capacities, limited by resources

While the theoretical models contribute to the interpretation of actually observed fluctuations, they cannot always explain these fluctuations unequivocally. More or less regular fluctuations are also known as oscillations .