from Wikipedia, the free encyclopedia
This is the spotted version , flagged on August 16, 2020 . There are 2 pending changes that have yet to be viewed.

The Hochtaunuskreis is known for its properties with high rent levels as well as for the second-highest purchasing power index of all German rural and urban districts . In 2018, the purchasing power index was 143.0 percent of the national average. The cities of Königstein im Taunus (204.4 percent) and Kronberg im Taunus (183.1 percent) have the highest per capita incomes in the Hochtaunus district and take top positions nationwide. The neighboring Main-Taunus-Kreis has the fifth-highest per capita income of all rural and urban districts in Germany with a purchasing power index of 132.1 percent .

The Hochtaunuskreis lies almost entirely in the Taunus , while its foreland with the "Taunus outskirts" Bad Homburg, Oberursel , Friedrichsdorf , Kronberg and Königstein in the south, which already belong to the Frankfurt metropolitan area, merges into the Upper Rhine Plain and in the east into the Wetterau . The highest point is the Große Feldberg ( 879  m above sea  level ), the lowest point in the district is near Ober-Erlenbach , a district of Bad Homburg ( 128  m ). The Hochtaunuskreis is often divided into the Vorder Taunus and the eastern Hintertaunus , with the Vordertaunus corresponding to the side facing Frankfurt (in front of the height) and the eastern Hintertaunus, which is often used as Frankfurt's local recreation area, is on the other side of the Taunushauptkamm .

The district borders in a clockwise direction in the northwest on the districts of Limburg-Weilburg , Lahn-Dill-Kreis and Wetteraukreis , the independent city of Frankfurt am Main and the Main-Taunus-Kreis and the Rheingau-Taunus-Kreis .

See also : List of desert areas in the Hochtaunuskreis 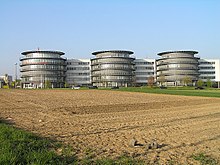 In the Middle Ages, today's district area belonged to various rulers, to Kurmainz , the Lords of Kronberg and Eppstein . At the beginning of the 19th century the southern part belonged to the Landgraviate of Hesse-Homburg , the northern part to the principality , later the Duchy of Nassau .

After the German War and the Prussian annexation in 1866, the Obertaunuskreis with its seat in Bad Homburg emerged from Hessen-Homburg and the Nassau authorities of Königstein and Usingen . According to the district order of April 1, 1886, a part with 46 communities north of the ridge was organized in a new district of Usingen . 34 communities with an area of ​​22,454 hectares remained in the Obertaunus district.

Due to the Prussian savings regulations, the Usingen district was dissolved on August 1, 1932. Parts of the district fell to the neighboring districts of Wetzlar , Oberlahn and Untertaunus , the lion's share, however, to the Obertaunus district. Just one year later, on October 1, 1933, the Usingen district was restored at the instigation of the local National Socialist German Workers' Party (NSDAP).

In the course of the regional reform in Hesse , the Hochtaunuskreis was formed on August 1, 1972 . Stepped to the new circle

At the same time, on August 1, 1972, a series of amalgamations created the structure that still exists today in 13 municipalities. The city ​​of Bad Homburg was named as the seat of the district administration and thus as the district town .

In December 1991 the Hochtaunus became known nationwide through a corruption affair.

In February 2004, the then District Administrator Jürgen Banzer (CDU) discussed a possible merger of the Hochtaunus district with the neighboring and similarly structured Main-Taunus district . Merging the two districts could result in annual savings of 18 to 20 million euros.

According to the 2011 census , 32.0% of the population were Protestant , 26.0% Roman Catholic and 42.0% were non-denominational , belonged to another religious community or did not provide any information. The number of Protestants and Catholics has fallen since then.

District administrators of the Hochtaunus district

See also : Elections in the Hochtaunuskreis

In 1986 the Hochtaunuskreis entered into a partnership with the Israeli district of Gilboa .

The design comes from the heraldist Heinz Ritt .

See also : List of coats of arms in the Hochtaunuskreis

The district town of Bad Homburg is an internationally known health resort . With Fresenius Medical Care and Fresenius SE & Co. KGaA, two DAX companies have settled in Bad Homburg . Other well-known companies based in the Hochtaunus district include Milupa , Alte Leipziger Versicherung , Avis Autovermietung and the Thomas Cook Group . The Gillette Group (with Braun and Oral-B), Jaguar Germany , Fidelity Investments Germany, Accenture Germany (all in Kronberg) and Canton Elektronik (in Weilrod ) also have their headquarters in the Hochtaunuskreis .

In 2017, the Hochtaunuskreis recorded the second highest purchasing power of all rural and urban districts in the Federal Republic of Germany, with 143.2 percent of the national average (the average per capita income available per year is EUR 31,561). It is noteworthy that all the municipalities in the Hochtaunuskreis - with the exception of the municipality of Grävenwiesbach  - have a purchasing power index that is well above average. Many wealthy people (such as bankers from neighboring Frankfurt) live in and around Bad Homburg. The entire district has very high land prices and is characterized by a generally very high rental level. The Bavarian district of Starnberg (EUR 32,194 per inhabitant) is in first place nationwide, the district of Munich is in third place (EUR 30,907), the city of Munich in fourth place (EUR 30,136) and the neighboring Main-Taunus district ( 29,931 euros), in which Bad Soden am Taunus in particular is considered an expensive location.

In the future atlas 2016 , the Hochtaunuskreis ranked 15th out of 402 districts, municipal associations and independent cities in Germany, making it one of the regions with “very high future prospects”.

The area of ​​today's Hochtaunuskreis lies away from the major axes of the long-distance railway network that emanate from Frankfurt. The southern slope of the Taunus Mountains, whose towns and villages were as popular as baths and health resorts as well as preferred residential areas a hundred years ago as they are today, was therefore developed from Frankfurt by several railway companies with often only short branch lines.

The Homburg Railway Company opened its line on September 10, 1860, starting in Frankfurt from the Main-Weser train station . Although it circumnavigated the Hessian town of Bockenheim, it needed a concession from four sovereign states for its route via Rödelheim –Oberursel to Homburg, the then residence of a small county and today's district town of the Hochtaunus district.

In Rödelheim, from November 1, 1874, a branch line of the Cronberger Railway Company branched off to the picturesque Taunus town of Kronberg. The neighboring town of Königstein was opened up on February 24, 1902 by the Höchst – Königstein railway, which is now part of the Hessian State Railway (HLB) . In the meantime, the trains of all three railways start at the main station in the center of Frankfurt.

In addition, from May 1910, the Frankfurt local train connected Bad Homburg and Oberursel-Hohemark to the city with two electric suburban trains, which are now part of the Frankfurt subway network . There was an electric tram in Homburg since 1899, which also operated a line to the Saalburg Roman fort until 1935 .

The radial rail network in the Vordertaunus from Frankfurt was extended beyond the Taunushauptkamm in 1895 by the Homburg – Friedrichsdorf – Usingen line, which was connected in 1909 via Grävenwiesbach with the line to Weilburg an der Lahn. Since 1912 there was also a branch line from Grävenwiesbach through the Solmstal to Wetzlar. This is the basis of today's municipal Taunusbahn, which ends today in Brandoberndorf ( Waldsolms municipality ) in the Lahn-Dill district.

Friedrichsdorf there since 15 July 1901 connection to the Main-Weser Railway to Friedberg (Hessen) ( railway Friedberg-Friedrichsdorf ), which in the course of Bäderbahn Berlin Bad Nauheim -Bad Homburg- Wiesbaden was for years also used by high-speed trains .

The cities of Bad Homburg ( line U2 , terminus Bad Homburg- Gonzenheim ) and Oberursel (line U3, Oberursel-Hohemark) are connected to the Frankfurt underground network .

As Verkehrsverband Hochtaunus (VHT), a special purpose association was founded in 1988 by the Hochtaunus district and all of its towns and communities. The association acquired the 28.8-kilometer-long Friedrichsdorf – Usingen – Grävenwiesbach federal railway for a purchase price of DM 2.8 million in order to save it from being closed. All public transport lines have been incorporated into the Rhein-Main-Verkehrsverbund (RMV) since 1995 .

The Hochtaunuskreis operates hospitals in Bad Homburg and Usingen with the Hochtaunus clinics . In addition, he is the owner of Taunus Menu Service GmbH based in Neu-Anspach, which supplies the clinics, the Oberursel workshops and some of the schools in the Hochtaunus district with dishes that are cooked and shock-frozen using the boiling -and-cooling process. Together with the Main-Taunus-Kreis , the Hochtaunuskreis supports the Taunus Sparkasse . Also together with the Main-Taunus-Kreis, the Hochtaunuskreis is a shareholder in Rhein-Main Deponie GmbH (RMD) (50 percent each). The district holds significant shares in the Zweckverband Naturpark Taunus and the Zweckverband Verkehrsverband Hochtaunus (VHT). As Eigenbetrieb the Oberurseler workshops are run for disabled people. The district holds shares in other companies such as Nassauische Sparkasse , Süwag and Nassauische Heimstätte .

The Hochtaunuskreis comprises eight cities and five other municipalities. The county seat and largest city is Bad Homburg v. d. Altitude , which is also a special status city . Some cities have official name suffixes such as "(Taunus)", "im Taunus" or "v. d. Height". These are official components of the respective city name. The community of Neu-Anspach was elevated to a city on October 31, 2007 due to the population of 15,000 being reached .

On August 1, 1972, the district was assigned the HG distinctive sign , which had been valid for the Obertaunus district since July 1, 1956 . It is derived from the district town of Bad Homburg vor der Höhe and is still issued today. As part of the license plate liberalization , the USI (Usingen) distinguishing mark has also been available since January 2, 2013 .

Important regional newspapers are the Taunus-Zeitung (a head page of the Frankfurter Neue Presse ) and the Usinger Anzeiger , which is primarily represented in the Hintertaunus . The Frankfurter Rundschau appears in a Taunus edition, which is devoted to events in a circle.