The GfK SE (slogan: English Growth from Knowledge , growth of knowledge ' ), based in Nuremberg is the largest German market research institute , currently the world's number five in the industry. Since March 2017, GfK has been majority-owned (96.7%) of the investment fund Acceleratio Capital NV , a holding company of the American private equity group Kohlberg Kravis Roberts & Co.

The company collects the ratings for television in the Federal Republic of Germany. The municipality of Haßloch serves as an average place as a test market for the GfK BehaviorScan instrument, which primarily examines the effect of television advertising and simulates the launch of new products. The company also calculates the GfK consumer climate index , among other things .

GfK building on the Nordwestring in Nuremberg 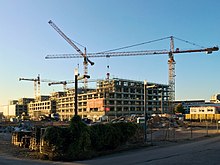 GfK was founded in February 1935 as GfK-Nürnberg Gesellschaft für Konsumforschung e. V. founded by professors from Nuremberg, including the later German Minister of Economics and Chancellor Ludwig Erhard . The concept was designed by co-founder Wilhelm Vershofen .

In August 2016, GfK lowered its profit forecast for the current financial year as a result of high amortization of goodwill. The Wirtschaftswoche reported on plans to sell the GfK Association.

In December 2016, the holding company KKR submitted a takeover offer for 18.54 percent of the company's shares. GfK's Executive and Supervisory Boards supported KKR's offer with a volume of at least EUR 294 million.

GfK SE's listing ended with a squeeze out in October 2017.

In autumn 2018, the French competitor Ipsos acquired a business unit with 1,000 employees that deals with customer-specific individual orders for EUR 105 million.

GfK is active in the two sectors Consumer Choices and Consumer Experiences . From 1999 to 2009 the company was listed on the stock exchange as GfK AG and then until 2017 as GfK SE. It is a holding company for 120 subsidiaries , including GfK Entertainment , and has holdings in over 100 countries.

Display of a GRP meter

Within Germany, GfK is especially known to them with the measurement of audience ratings of the television is in charge. For this purpose, special measuring devices ( fiberglass meters , also known as fiberglass telemeters ) are used, which are connected to the television set.

The development of the GfK meter goes back to 1963. The first television meter, called Tammeter , was developed by the British “Television Audience Measurement” (TAM). ARD and ZDF founded a joint subsidiary with “Infratam” based in Wetzlar and from 1963 to 1974 carried out the first continuous quota measurements. The Tammeter measured to the minute, but only delivered the results (device switch-on, channel, time) four weeks later and only for the entire television household.

In 1975 the Tammeter was replaced by the Teleskomat (also by Infratam), which recorded personal results from 1,200 households every 30 seconds up to six programs and up to seven people in the household and delivered them over the telephone line to the central computer overnight. Telecontrol (TC 3, TC 6, TC XL) was a further step forward. When measuring the audience rating, it takes into account all programs, all people involved in the respective television broadcast and, with the help of the telephone line, the data in the GfK data Center transmitted.

Since 1985, the television use of originally around 2,700 representative selected households has been measured to the second using the GfK meter in Germany. The panel was expanded because of the inclusion of the new federal states in 1991 and because of new regional targets in 1996. In addition, 140 households from the European Union were added in 2001 . After reaching a high of 5,500, since 2012 the television panel has consisted of 5,000 daily accessed households in which around 10,500 people live. The system (GfK-Meter) consists of three parts: the actual measuring device, a remote control with which all persons in the household have to log in and out individually, and a display. At night, the data is sent over the telephone line to GfK in Nuremberg, where it is evaluated and made available to members of the television research group the next morning .