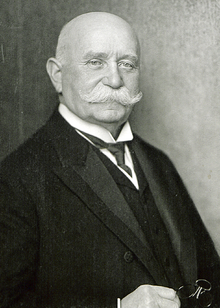 Ferdinand Adolf Heinrich August Graf von Zeppelin (* July 8, 1838 in Konstanz ; † March 8, 1917 in Berlin ) was a German Count of Württemberg , general of the cavalry and the developer and founder of rigid airship construction. The " Zeppelin donation of the German people " in 1908 represented the decisive turning point in his efforts . The zeppelins he developed were used in civil aviation from 1909 to 1914 ( DELAG ), then increasingly during the First World War . They experienced a second flowering after von Zeppelin's death in the 1920s and 1930s. The still existing Luftschiffbau Zeppelin GmbH and the Zeppelin Foundation go back to von Zeppelin . 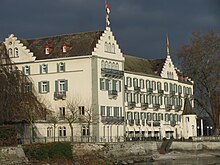 Birth in the former Dominican monastery in Constance 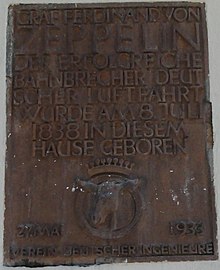 Ferdinand Zeppelin was born on July 8, 1838 on the Dominican Island in Konstanz in what is now the Inselhotel. He was the son of the former royal Hohenzollern court marshal and cotton manufacturer Count Friedrich Jerôme Wilhelm Karl von Zeppelin (1807–1886) and his wife Amélie Françoise Pauline (née Macaire d'Hogguèr) (1816–1852). Their father David Macaire d'Hogguèr (1775–1845) gave the von Zeppelin family the Girsberg Castle in Emmishofen (Switzerland), where Ferdinand grew up with his siblings Eugenia and Eberhard and which he lived in until his death.

Ferdinand was brought up by private tutors . From his uncle Kaspar Macairé , the owner of an indigo dye works on the Dominican Island in Constance, he received his natural history collection in 1846, which he subsequently re-inventoried at Girsberg Castle and increased the holdings. From 1853 he first attended secondary school and the polytechnic in Stuttgart. Ferdinand kept a diary from childhood and for almost all of his life.

In 1855, when he was 17, he entered the Ludwigsburg War School as a cadet . In 1858 he became a lieutenant in the Württemberg Army and in the same year he was given leave of absence to study political science, mechanical engineering and chemistry in Tübingen. However, due to the precautionary mobilization due to the Austro-Italian conflict, he had to break off his studies in 1859 and was called up to the engineering corps.

On leave again, Zeppelin traveled to North America via Liverpool , where he received an audience with President Abraham Lincoln . After he had received identification papers for the armies of the northern states, he took part in the Civil War as an observer from 1863 . For this he was assigned to the Potomac Army of the Northern States . Zeppelin experienced the military use of balloons for the first time and was able to take part in a balloon flight on April 30, 1863. This experience never let go of him, but he also recognized the weakness of the free balloons: their dependence on the respective wind direction or their inability to steer.

In November 1863 he returned to Württemberg and in April 1865 became adjutant to King Karl I of Württemberg . In 1866 he experienced the German War as a general staff officer and was awarded the Knight's Cross of the Württemberg Military Merit Order. 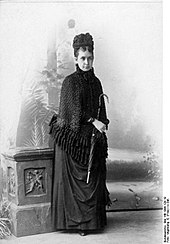 Count Zeppelin married Isabella Freiin von Wolff -Alt-Schwanenburg on August 7, 1869 in Berlin (* May 4, 1846 in Alt Schwanenburg , Livonia ; † January 2, 1922 in Stuttgart). She was a cousin of Sophie Freiin von Wolff-Stomersee (1840-1919), who had married Ferdinand's brother Eberhard von Zeppelin a year earlier . The only child from the marriage of Ferdinand and Isabella was Helene (Hella) von Zeppelin (1879-1967). 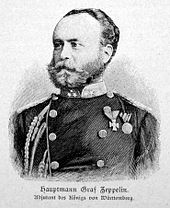 In the Franco-Prussian War of 1870/71, Zeppelin became famous due to an extensive exploratory ride behind enemy lines. The use of free balloons also played a certain role in this war, especially on the French side. In his diary there is the first entry for April 25, 1874 about the idea of ​​building a steerable airship, after he had followed a lecture by Reich Minister of the Post Heinrich von Stephan on the subject of "World Post and Airship" on that day . In the same year he was promoted to major. As a lieutenant colonel, Zeppelin was appointed commander of the Uhlan regiment "King Karl" (1st Württembergisches) No. 19 in Ulm in 1882 , where he was promoted to colonel in 1884 .

In September 1885 he was appointed military plenipotentiary at the Württemberg legation in Berlin, and in 1887 he was appointed Württemberg envoy himself. During this time he wrote a memorandum to the King of Württemberg on the “necessity of steering balloons”. In particular, he demonstrated that in contrast to balloons, only dirigible airships are useful for warfare. Another "personal memorandum" from 1891 to the Prussian Foreign Ministry, in which he criticized the Prussian high command over Wuerttemberg troops, provoked the emperor's displeasure. In the autumn maneuver of 1890, in which Zeppelin led a division, he was judged unfavorably by the inspector of the cavalry, the Prussian General von Kleist, whereupon he retired from active military service. However, he was promoted to lieutenant general by the Württemberg king and remained "General à la suite ". In 1891 he took part in an aviation run by balloonist Eduard Spelterini in Switzerland with the Urania balloon .

Plans for a Rigid Airship

After his departure, he devoted himself entirely to the construction of a rigid airship . An expert commission appointed by Kaiser Wilhelm, which included Professors Hermann von Helmholtz , Richard Aßmann , Adolf Slaby , Heinrich Müller-Breslau and the later designer of semi-rigid military airships, Prime Lieutenant Hans Groß , advised the War Ministry after consulting in two meetings about funding of the project. Although Zeppelin fought against the decision and individual members of the commission, the following years were not very successful for him. From 1895 he was denounced as a fool in the population and sometimes laughed at on the street. His attempt to raise the capital of around one million marks necessary to build an airship on his own initiative was unsuccessful: the Kaiser subsidized Zeppelin with 6,000 marks. Old friends and members of the Württemberg royal family raised another 100,000 marks.

In 1896, Zeppelin became a member of the Association of German Engineers (VDI), which supported the airship project. In addition to the convening of a commission, the association also submitted a large-scale appeal to support the project. In fact, through this appeal, Zeppelin succeeded in initiating the joint-stock company for the promotion of aviation in cooperation with German industrialists in 1898 and founded it a little later. However, some industrialists were still reluctant to participate financially, so that Zeppelin had to raise half of the company's share capital of 800,000 marks from its private assets.

On August 13, 1898, Zeppelin acquired the imperial patent number 98580 for a " steerable aerial vehicle with several supporting bodies arranged one behind the other". The design for his rigid airship was thereby protected retrospectively to August 31, 1895, and from now on the phase of construction and implementation of the first airship began. The most important features of Zeppelin's construction were the rigid aluminum frame , which was made up of rings and longitudinal beams, the fixed connection of the two gondolas with the frame, the division of the gas space into cylindrical cells of equal size and the attachment of propellers at the height of the center of the air resistance . In 1899 he started construction.

The airships were called zeppelins . Zeppelin's ideas continued to be largely rejected and ridiculed by experts and the general public; Kaiser Wilhelm II described the count as the "dumbest of all southern Germans". During this time, Zeppelin said: “Naturally, nobody is responsible for me because nobody wants to take the plunge into the dark. But my goal is clear and my calculations are correct ”.

In 1900 there were three ascents of LZ 1 over Lake Constance . The steadily better results led to spontaneous enthusiasm among the population, which made a decisive contribution to the fact that the count was able to further develop the technology of the airships and their operation. On January 7, 1901, the Emperor awarded him the Order of the Red Eagle, First Class. On December 5, 1905, he was given the character of the Württemberg cavalry general . Zeppelin bought the designs and patents of her husband from the widow of the Hungarian aviation enthusiast and inventor David Schwarz and used them for his developments.

Zeppelin donation by the German people in 1908

The realization of the second Zeppelin was only possible through donations and the income of a kind of money lottery, despite initial successes. The financial situation remained difficult. After a series of accidents with his airships, he was popularly referred to as the fool of Lake Constance .

When the Zeppelin LZ 4 crashed at Echterdingen near Stuttgart on August 5, 1908 , this triggered a wave of helpfulness and a turning point. The decisive factor for this was a speech given by an unknown person in which the latter asked the German people to collect a new zeppelin. The " Zeppelin donation of the German people " carried out as a national donation brought in over six million marks, with which Zeppelin was able to establish Luftschiffbau Zeppelin GmbH and the Zeppelin Foundation .

Civil and military use

In 1908, the military administration bought the fully functional airship LZ 3 and put it into service as Z I. From 1909 zeppelins were used in civil aviation. In November 1909 the DELAG Deutsche Luftschiffahrts-Aktiengesellschaft was founded. In 1910, Zeppelin took part in an expedition to Svalbard to explore the conditions for using the airships to explore the Arctic. In the same year he acquired an area of ​​25 hectares on Pirschheide in Potsdam West . In 1912 the largest airship hangar in Germany was built here. The German Air Shipping Co. ( DELAG ) transported to the beginning of World War I in 1914 to more than 1,500 trips a total of nearly 35,000 people. Then LZ 11 , LZ 13 and LZ 17 were handed over to the German army.

From 1914, war airships were built for the First World War . Initially, the airships were an important part of warfare as bombers and reconnaissance aircraft . Later on, airplanes increasingly took on the role of zeppelins. Zeppelin's plans were to develop Potsdam into an aviation center for Europe. However, in 1917 production had to be stopped. 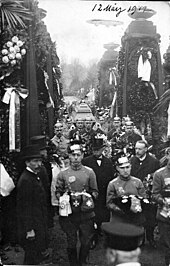 Burial of Graf Zeppelin in Stuttgart

From 1916 until his death, Zeppelin was a representative of the knighthood in the first chamber of the Württemberg state parliament . He died in Berlin in 1917. His grave is in the Prague cemetery in Stuttgart .

The still existing Luftschiffbau Zeppelin GmbH and the Zeppelin Foundation go back to Ferdinand von Zeppelin . The airship port Potsdam , built in 1911, is now used for sports purposes and as a congress center.

After the temporary end of his airships towards the end of the First World War and due to the Treaty of Versailles , his successor Hugo Eckener saw a second bloom of large rigid airships, which came to an end on May 6, 1937 with the accident of the LZ 129 "Hindenburg" .

Reception in art and culture

The person and the work of Ferdinand von Zeppelin found diverse reception in art and culture during his lifetime and after his death. These ranged from respectful honors to comical or mocking exposure. As part of the zeppelin and aviation enthusiasm, mainly before and during the First World War, zeppelin stones were set up in many places .

One of the well-known caricatures is an illustration that appeared in Simplicissimus magazine on August 18, 1908, shortly after the accident in Echterdingen . Graf Zeppelin is shown caricaturally in a "gallery of famous contemporaries" and portrayed as a man holding a small balloon in his hand. Zeising interprets this caricature as a representation of an "infantile air old man with tailcoat and children's balloon in hand".

Another well-known cartoon appeared in Simplicissimus in 1928. Zeppelin is drawn here as a lying, cloud-like figure, which looks down at the LZ 127 Graf Zeppelin airship named after him , which was supposed to make its first flight in 1928.

Likewise, many artists from the field of cabaret and cabaret have made songs and scenes on and about the Zeppelin that have been preserved on Edison cylinders and gramophone records . 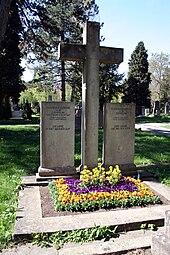 Grave in the Stuttgart Prague cemetery

According to Zeppelin's own report, he converted a fishing boat into a sports sailboat in the 1860s, making him one of the first sports sailors on Lake Constance .