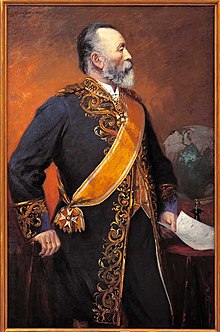 Ernst Heinrich Wilhelm Stephan , from 1885 by Stephan (born January 7, 1831 in Stolp , Pomerania ; † April 8, 1897 in Berlin ) was the General Postal Director of the German Reich , organizer of the German postal system and co-founder of the Universal Postal Union . He was the Imperial Real Privy Councilor , State Secretary of the Reich Post Office (1880–1897) and Royal Prussian State Minister (1895–1897), a member of the Prussian State Council and the Prussian Manor(1872–1897) and Canon of Merseburg . He achieved particular importance as a language tutor.

Postage stamp for the 100th anniversary of death

Stephan came from a Pomeranian family and was the eighth of ten children of the master tailor Friedrich Stephan (1792–1860), city councilor and councilor in Stolp, and Marie Luise Weber called Döring (1794–1869).

Even as a student at the Stolper Gymnasium, Heinrich Stephan stood out for his extraordinary talent. He passed his school leaving examination early and with top grades. He had also learned to play the violin and piano from a private music teacher. Heinrich Stephan also stood out with good performance in his apprenticeship at the Stolper Post from February 20, 1848, so that he came to Marienburg in 1849 as a civil servant candidate with an excellent certificate . Just one year later he was a postal assistant in the Gdansk Post Office Directorate .

After completing his one year service in the Prussian Army, he was transferred to the Oberpostdirektion in Cologne after a brief interlude at the General Post Office in Berlin . Here he mainly dealt with the processing of overseas postal bills, and this is where the first ideas for the standardization of international postal traffic arose. In 1855, Stephan finally completed his training with the completion of the examination for the higher postal service, again with distinction. Then he returned to the General Post Office in Berlin.

One of his first tasks in the General Post Office was to work out a parcel post tariff for the area of ​​the German-Austrian Post Association , which was adopted unchanged at the German Post Conference in Munich in 1857 according to his proposals. Stephan also tried to speed up the acceptance and handling service by introducing postal stenography , but could not get his way with these ideas.

In September 1858 he completed his extensive work “The history of the Prussian Post from its origins to the present”, which, contrary to the title, not only depicts the history of the post in Prussia , but also the entire postal development in Europe. This standard work on postal history was published in print in 1859 by the publishing house of the Royal Secret Upper Hofbuchdruckerei in Berlin. In addition, in the same year his work "On the British postage reform Rowland Hills of 1840" appeared, in which he welcomed the introduction of the British standard postage under Rowland Hill .

In 1860 he was a representative at the German Postal Conference in Frankfurt am Main, where the organizational problems caused by the fragmented small states confirmed his will to reform. In 1862 and 1863 he achieved postal contracts with Belgium and the Netherlands, and in 1864 with Spain and Portugal. In 1865 he published a memorandum on the introduction of the postcard , which was rejected by the Prussian Postmaster General because of the "indecent form" of the messages and the expected loss of income, but was heard at the fifth conference of the German Post Association in Karlsruhe in November 1865.

After the outbreak of the German War in 1866, Stephan published a memorandum in which he advised the Prussian government to take possession of the Thurn and Taxis Post Office as soon as the military situation allowed it. After the victory in the German War, Prussia occupied the Free City of Frankfurt and forced Thurn und Taxis to hand over the postal facilities to the Prussian state in a contract of assignment. The treaty was ratified on January 28, 1867, and the delivery took place on July 1, 1867. Stephan, meanwhile, concluded postal treaties with the United States of America, Norway, Denmark, Switzerland, Italy and Sweden. In 1868 he was promoted to the Secret Upper Post Council. Again he wrote numerous papers, including his "Memorandum on the General Postal Congress" (1868), in which he set out basic principles and guiding principles for a global postal community.

After the outbreak of the Franco-Prussian War in 1870, Stephan was appointed General Postal Director by Federal Chancellor Otto von Bismarck and thus head of the postal administration of the North German Confederation . During the war he created a rational field post machine .

After the end of the war and the establishment of the German Empire , Stephan headed the entire postal administration as general post director and in the winter of 1872/73 he sealed the Franco-German postal treaty, which had already been negotiated for a long time, and concluded new treaties with Spain and Portugal as well as some South American states. In addition, he carried out radical reforms of the civil servants' and operational relationships of the Reichspost . On his initiative, an accident, health and old age insurance was introduced for the postal workers and the post office buildings built around 2000 under his management were equipped with modern and functional work rooms.

On January 4th, 1872, the Imperial General Post Office proposed the establishment of “savings and advance payment associations” for postal workers by decree of Stephans. In 1872 36 associations with 12,067 members were founded . The PSD banking group , which is still in existence today and has around 1.2 million customers, 600,000 members and 14 independent banks (as of 2015) , emerged from these organizations, later called Post-Savings and Loan Associations .

The German Post Museum in Berlin, which still exists today, was founded by Stephan in 1872. The University of Halle awarded him an honorary doctorate for his scientific publications in 1873. In 1875 he also joined the post office's telegraph system and connected all of Germany's major cities with telegraph cables.

Von Stephan also achieved great merits in the field of language maintenance by striving for understandable German expressions in official language communication. By decree of 21 June 1875, he led 671 Verdeutschungen in the postal sector one, including, Envelope '(instead of the hitherto usual French couvert ), registered' (instead recommandé ), postcard '( Correspondence ), general delivery' ( poste restante ), 'Cash on delivery' (remboursement) and delivery note ('récépissé'). He is therefore considered to be a representative of German linguistic purism . In 1887 the General German Language Association appointed him its first honorary member. 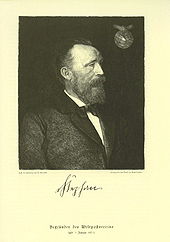 Portrait as Secretary of State (1885)

On January 1, 1876, Stephan took over the post of General Postmaster , whose area of ​​responsibility brought together the former Departments I (postal system) and II (telegraph system) of the Reich Chancellery. This finally resulted in the Imperial Post Office in 1880 , of which Stephan was the first State Secretary . On October 26, 1877, he had the first telephone attempts carried out in Berlin between the General Post Office and the General Telegraph Office. This date is considered the birthday of telephony in Germany. Between 1877 and 1881 he built up the telephone network in Germany with the primary intention of "possibly providing every citizen with a telephone to every other person" . 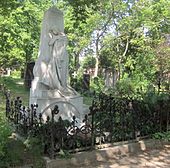 Serious diabetes and a leg amputation that followed put an end to his work. Heinrich von Stephan succumbed to his illness at the age of 66 on April 8, 1897 in the Reich Post Office, Leipziger Strasse 15.

The funeral service, led by Ernst Dryander , took place on April 11th in the presence of numerous dignitaries, led by Kaiser Wilhelm II and Reich Chancellor Chlodwig zu Hohenlohe-Schillingsfürst , in the atrium of the not yet completed extension of the Reich Post Office on the corner of Leipziger Strasse and Mauerstrasse . The coffin was then transferred to the Trinity Cemetery I in front of the Hallesches Tor , where Heinrich von Stephan was buried, with great pomp and great sympathy from the Berlin postal workers and the public in a funeral procession lasting 45 minutes .

The marble funerary monument designed by Joseph Uphues shows a mourner leaning against an obelisk . The monument was executed in the workshop of Valentino Casal. In winter, the tomb is enclosed by the Museum Foundation Post and Telecommunications , which is supported by Deutsche Post AG and Deutsche Telekom , to protect it from frost damage .

Memorial in Schwerin in front of the former OPD building

One of his main concerns was language maintenance. In order to remove the predominantly French terms from the German postal language, he issued 671 Germanizations that had to be used in the postal system from June 21, 1875. His aim was to drive out the "countless wildlings" of the German language. He thus created "an alley that quickly expanded and soon penetrated victoriously from the individual administrative areas of the post office, into all areas of our authorities, into the legislation, the army, the railway and construction administration, the school and all of the literature."

Because of these achievements for the entire German-speaking area, the General German Language Association appointed him its first honorary member in 1887.

Wikisource: Appointment H. v. Stephans as a member of the Federal Council on April 29, 1870  - sources and full texts

State Secretaries in the Imperial Post Office of the German Empire