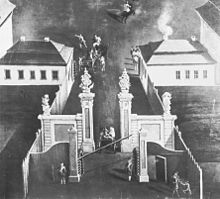 Hallesche Tor 1845, based on a Berlin emergency bank note from 1921

The Hallesche Tor was located in today's Berlin district of Kreuzberg south of Mehringplatz . Today, a listed underground station on the site of the former gate bears the name Hallesches Tor . It is a heavily frequented transfer point of the underground lines U1 (here as an elevated train ) and U6 as well as the bus lines 248 ( Berlin Ostbahnhof - Breitenbachplatz via Südkreuz ) and M41 (main station via Potsdamer Platz - Baumschulenstraße). The station is connected by the Hallesche-Tor-Brücke with Blücherplatz, which adjoins it to the south. The America Memorial Library located there and the nearby Jewish Museum contribute to the heavy visitor traffic in the area around Hallesche Tor. 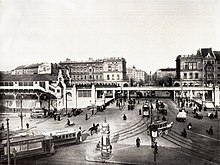 Hallesches Tor after 1902, view over the Landwehr Canal to the newly opened station of the elevated railway company

It is named after the historic and no longer existing Hallesche Tor of the Berlin customs or excise wall, which replaced the Berlin city wall in the 18th century . The gate lay in the south of Berlin between the water gate and the Potsdamer gate and formed the exit gate to the Prussian hall on the Saale . Until the edict of the Jews of 1812, the gate was the only one in the south of Berlin that Jews were allowed to pass, although they had to be registered. In the north they were only allowed to  enter the city through the Rosenthaler Tor - from 1750 through the Prenzlauer Tor .

Since the beginning of the 18th century, several cemeteries have been laid out in front of the Hallescher Tor outside the city . The area was named Am Halleschen Thore around 1848 . Between 1876 and 1879, Heinrich Strack built arcaded residential and commercial buildings in place of the gate and the Belle Alliance Bridge as a representative entrance to Berlin's inner city. The complex was adorned with four groups of figures that themed trade and traffic. After severe war damage and post-war demolition, the bridge was restored in the 1950s and 1980s and two groups of figures were put up again.