According to the postcodes valid until 1993 , there are two different locations in Kreuzberg , named after the numbers of the delivery post offices at the time: the larger Kreuzberg 61 (formerly: Südwest 61 ) and the smaller SO 36 (SO = southeast) . At the time of the Berlin Wall , SO 36 was enclosed on three sides and developed an alternative culture of its own on the eastern edge of West Berlin . Kreuzberg has a lively nightlife and cultural life that is known beyond the city limits. Numerous artists and literary institutions have their residence or their place of business in the district. Due to the ambivalent-tolerant local politics , the district of Kreuzberg, in particular the location "Berlin SO 36" ( Görlitzer Park ), is considered to be drug traffickers and drug users friendly and is partially tolerated by the residents.

Along with Neukölln , Friedrichshain , Gesundbrunnen and Prenzlauer Berg, Kreuzberg is one of the very densely populated districts of Berlin. This is explained by the building principle followed since the early days of the greatest possible use of the property with a front building, side wings and adjoining - up to four - rear buildings . Even today, up to 150 tenants live in these " tenements " in houses with an eaves height of 22 meters. Due to frequent tenant changes, the curiosity has arisen that lower rent is paid for long-term front-building apartments than for rear-building apartments.

The later eponymous Kreuzberg was still outside the city limits until the middle of the 19th century.
Painting by Johann Heinrich Hintze, 1829

Tenement houses at the intersection of Gneisenaustrasse and Mittenwalder Strasse, around 1900

In the Middle Ages , the area of ​​today's Kreuzberg district was outside the city walls of the twin cities of Berlin - Cölln . When the urban area of ​​Berlin expanded in the 18th century and the customs and excise wall became the new city boundary, a new city quarter was created behind the Hallescher Tor (today located in the northern part of Kreuzberg).

In the course of the 19th century Berlin continued to grow and the Tempelhofer Vorstadt (incorporated in 1861) and Luisenstadt (incorporated in 1841) were added in this area . Important streets and squares in the new districts were dedicated to the Prussian military as part of the so-called general train and battles won against Napoleon during the wars of liberation (1813–1815) . It was named after officers Gebhard Leberecht von Blücher (Blücherstraße and Blücherplatz), Ludwig Yorck von Wartenburg ( Yorckstraße ) and August Neidhardt von Gneisenau ( Gneisenaustraße ) as well as the battles near Waterloo (Waterloo-Ufer and Belle-Alliance-Straße , renamed in 1947 to Mehringdamm ) and Möckern ( Möckernstrasse and Möckernbrücke ). A thematic and urban planning point of reference was the national monument on the Kreuzberg , inaugurated in 1821 , which at that time, however, was still in its original conception in the open field in front of the city on the edge of the Teltow plateau . On the 66 meter high elevation - at that time still called Tempelhofer Berg - a monument in the basic shape of the Iron Cross was erected according to a design by Karl Friedrich Schinkel to commemorate the Wars of Liberation.

Formation of the district

The Kreuzberg district was formed in 1920 from the Tempelhofer Vorstadt, the Upper Friedrichsvorstadt , the southern Friedrichstadt and a large part of the Luisenstadt . The former district and today's district was named after Kreuzberg, located in the southwest in today's Viktoriapark . After Greater Berlin was founded in 1920, the district was initially called Hallesches Tor.

In the air raid on February 3, 1945 the USAAF the area of the southern Friedrichstadt between today was Halle Gate in the south, the Prince Street to the east and the Koch Street in the north almost completely destroyed.

With the crossing of the Oder on April 16, 1945, at the end of the Second World War, the Red Army's major attack on Berlin began. After hard fighting in the run-up to Berlin, the armies of Marshal Zhukov first penetrated the east of the city on April 21.

Friedrichshain and Kreuzberg were in the area of General Bersarin's Soviet 5th shock army during the Battle of Berlin .

Shortly before the approaching Soviet troops, the middle arch of the Oberbaum Bridge was blown up on April 23 to prevent the passage there. The Red Army managed to cross the Spree from Oberschöneweide to Treptow on April 24th .

On April 25, the 9th Corps of the 5th Shock Army had crossed the Landwehr Canal from Treptow and was then involved in violent fighting in the area around the Görlitz station , which dominated the center of their front.

From the southeast, from Neukölln, another wedge reached Hermannplatz . On April 25, in the evening, which blew SS the Karstadt department store . The 8th Guard Army moved over the Hasenheide to Mehringplatz and Tempelhof Airport . 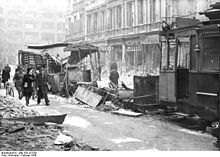 After lengthy fighting at Görlitzer Bahnhof , the units of the 5th Shock Army, operating further north, reached Moritzplatz on April 27 along Oranienstrasse and into the city ​​center area along Köpenicker Strasse .

After hard fighting in Tempelhof, the left wing of Shukov's 8th Guard Army branched off to Schöneberg under General Tschuikow , Viktoriapark in the middle was occupied and from there the Anhalter Bahnhof was shot at from sight. The right wing of the army was approaching the Landwehr Canal .

Since the bridges over the canal were blown up by a Wehrmacht commando in the evening on April 26th, the attackers paused in front of the canal, pulled artillery after them and on April 27th prepared to cross the water barrier.

“Chuikov's preparations for the attack over the Landwehr Canal envisaged a massive use of heavy artillery and rocket launchers for accompanying support. These were put into position after fogging during the day. There was no shortage of ammunition and the order was given not to use it sparingly. "

In the course of April 28, the attack on the canal succeeded over the rubble of the Möckernbrücke high station . Most of the defenders withdrew further into the city ​​center . Since the Anhalter Bahnhof, the bunker and the S-Bahn systems were overcrowded with thousands of people seeking protection, the isolation there resulted in unbearable conditions and dramatic scenes until May 1st.

Black market at the Anhalter Bahnhof

At the Hallescher Tor, the troops crossing the canal could also pull tanks to Belle-Alliance-Platz . The Anhalter Bahnhof was no longer the focal point of the fighting - the next center of defense was the RLM building ( Reich Aviation Ministry , today: Detlev-Rohwedder-Haus ) Wilhelmstrasse 97 / Leipziger Strasse 5-7. On the evening of April 29th, Kreuzberg was completely in Soviet hands.

Only the Tempelhofer Vorstadt and Luisenstadt survived the Second World War largely undamaged.

In July 1945, most of the then district was assigned to the American Sector . The main crossing to East Berlin was after the building of the wall of Checkpoint Charlie .

In 1968, today's Rudi-Dutschke-Strasse (part of what was then Kochstrasse) was one of the main scenes of the so-called " Easter riots " when angry students tried to prevent the Axel Springer Verlag newspapers from being delivered after the assassination attempt on Rudi Dutschke .

Kreuzberg owes its national fame primarily to the eventful history of the smaller eastern area (and post district) SO 36 , later Berlin 36, which - surrounded on three sides by the Berlin Wall - became legendary in the 1970s and 1980s as the center of the alternative movement and squatting has been.

Demolition on Skalitzer Strasse in Block 104 in 1980

At the end of the 1970s, SO 36 became the focus of area renovation , the operators of which encountered massive resistance here. The Kottbusser Tor became a symbol of deforestation and new construction , but in 1981 this form of urban renewal was stopped by the squatting on Heinrichplatz . The block 104 marks the reversal and the 1983 completed changes to the concept of Gentle Urban Redevelopment .

In June 1981, 165 occupied houses were counted in Berlin, 86 of them in Kreuzberg 36 and 61. The reconciliation policy initiated by the governing mayor Richard von Weizsäcker after the death of an occupier and supported by the Evangelical Church and the organization Netzwerk Selbsthilfe was successful until 1987 Legalization of 60 squatted houses in West Berlin . Thanks to the preservation of the “ neighborhood structures ”, SO 36 is a popular tourist destination, especially for young visitors.

SO 36 extends between the Spree , north of the Lohmühleninsel and the Landwehr Canal and east of the Luisenstadt Canal, which is now filled in . This area is still currently considered to be one of the lowest-income parts of Berlin. The greater part of Kreuzberg is formed by the north-west, heavily damaged southern Friedrichstadt (the newspaper district at the time ) and the entire southern half ( Kreuzberg 61 ). A number of well-known artists lived and live here around the Südstern .

Almost a third of the roughly 160,000 inhabitants are migrants , many of whom are of Turkish origin and their descendants. Kreuzberg is also known far beyond Berlin's borders for this demographic peculiarity. The population of Turkish origin is mainly concentrated in the eastern area SO 36 and here the Wrangelkiez . Since the beginning of the 21st century, the population structure of Kreuzberg has changed due to gentrification effects , since the district is one of the trendy districts of Berlin.

From 1987 onwards, Kreuzberg (SO 36) regularly hit the headlines on May 1st due to sometimes severe street battles . The starting point for the riots was usually a clash between participants in the May rallies and the police. Today the violence has become more and more ritualized and is accompanied by a large media presence . In 1987, starting from Lausitzer Platz , the riots at that time concentrated around Kottbusser Tor and Oranienplatz . At the Skalitzer road a branch of the food market was in that year Bolle in flames, was up to the foundation walls destroyed and not rebuilt. An Islamic community center ( Maschari Center ) with a mosque was built on the site in 2004 . A decline in violence has been observed since 2005, although this is related to a shift to other major German cities.

At the time of the Berlin Wall, Kreuzberg led an economic niche existence due to its peripheral location. With German reunification , it moved to the center of Berlin: In 1997, the center of gravity of Berlin was marked with a granite slab on Alexandrinenstrasse 12-14 at the corner of the connecting path to Wassertorstrasse ( Lage ), on which the coordinates are shown. The altered living conditions Kreuzberg has as a business location to appeal won. Numerous companies and organizations move to the bank of the Spree at the Oberbaumbrücke . 52.5014 13.4028

The Kreuzberger Chronik magazine has been published monthly since 1998 .

Population development in the Kreuzberg district

Panorama of the Kottbusser Tor at night

The Engelbecken, bordering northeastern Kreuzberg (left) and the south of the Mitte district (right),
awaits with a mixture of new and old architecture, August 2007

In the Kreuzberg district, despite its small size, most of the football clubs in the city of Berlin are located, although the district with only one grass sports field, the Willy Kressmann Stadium , is relatively poorly equipped. Long-established Kreuzberg soccer clubs are SC Berliner Amateure , FSV Hansa 07 , BFC Südring and BSC Eintracht / Südring 1931 . The most successful and well-known football club in Kreuzberg is Türkiyemspor Berlin . Kreuzberg's multicultural population structure is also reflected in the broad spectrum of many other associations, some of which have existed since the 1960s.

Kreuzberg in the film

Districts of Berlin in the Friedrichshain-Kreuzberg district