The Görlitzer Park is one of the large parks and recreational areas in the Berlin district of Kreuzberg . It was created in the late 1980s and early 1990s after the old Görlitz railway station was demolished . The name Görlitzer Bahnhof bears since only the nearby underground station Görlitzer Bahnhof . In the 14  hectare Görlitzer Park there is, among other things, a children's farm, several sports, playgrounds and football fields , two panoramic mountains and a small lake.

Closure of the railway site

On April 29, 1951, passenger traffic in the Görlitz station was finally stopped. The neo-classical station building, which was destroyed in the Battle of Berlin at the end of April 1945 , was blown up and demolished on October 24, 1962 at the instigation of the then Building Senator Rolf Schwedler ( SPD ), despite citizen protests by many residents, to make way for rebuilding of the no longer needed railway site.

In the post-war period there were huge coal heaps on the site. A part of Berlin was supplied with fuel from here. Until 1985, freight trains still ran over the connection to companies located on the station premises (gravel store, warehouse of a forwarding company, scrap yard). A border crossing was specially set up for this at the Landwehr Canal Bridge. Remains of the iron viewing bridge at this point have been preserved to this day. Today a short piece of track east of the canal bridge and two former goods sheds in Görlitzer Park remind of the former use of the station.

Prehistory of the park design

The citizen and squatter movement in Kreuzberg demanded the construction of a Görlitz city park back in the early 1980s : In the spring of 1983 a "greening" was due:

“The northern part of the site from Görlitzer Ufer along Görlitzer Strasse to the Fatih Mosque could then be greened at least temporarily. 'In order for vegetation to emerge at all, there is no design yet. [...] Therefore the citizens do not need to be involved yet. ' (Horticultural Office) "

At this time, the oil-contaminated floor of the former scrap press was replaced. There was still business on the square (coal supply). However, the responsible Reichsbahn property management had shown itself to be cooperative and “on the southern edge of the site the children's farm was developing briskly. Material and fodder donations from the surrounding industry flow in abundance, the bulldozer from the cement works occasionally passed topsoil donated for leveling. Only the money for the land lease is still very poor. "

The approval of the environment and finance senators was still pending at that time.

According to the Südost-Express , as early as 1979, on the initiative of the 'Verein SO 36', “the Kreuzberg district office rented the 4,000 square meter property.” However, the building authority wanted to use the site as a building site for the Spreewald pool. “So far, more than 1000 signatures have been collected for this playground. [...] [After negotiations] the district office now wants to try to find a solution that makes both a building site and a children's playground possible at the Görlitz train station. "

The hollow before the pedestrian tunnel was demolished, 1989

At the end of the 1980s, a district park based on plans by the Free Planning Group Berlin was built on the former railway site. Today only remains of track, the remains of a pedestrian tunnel, the former enclosure wall and three converted goods sheds in Görlitzer Park remind of the former use of the station.

Görlitzer Park seen from the Rodelberg, behind the Emmaus Church and the television tower
Background noise in Görlitzer Park, around 2013

In the south of today's park, several railway bridges connected the station area with the Treptow district , one of which is still preserved and as a pedestrian bridge leads directly from the park south of the Lohmühleninsel over the Landwehr Canal. A green corridor extends over this bridge on the former railway line parallel to Kiefholzstraße deep into Alt-Treptow , so that cyclists and pedestrians have an almost continuous park connection from Lausitzer Platz through Görlitzer Park to Treptower Park . Until the fall of the Berlin Wall, the Berlin Wall ran along the Landwehr Canal . Also in the southern part of the site, in the corner formed by Görlitzer Ufer and Wiener Straße , there was a locomotive shed with a turntable . At this point there is now a viewing hill with a slide and an 80 meter long toboggan run. The park delimits the Wrangelkiez in the north / north-east .

The Görlitzer Tunnel ( popularly known in Berlin by its nickname “Urethra”) was still accessible until at least the end of 1989 and when the park opened, it gave way to a large hollow in the middle of the park, which forms a kind of natural arena. The former walls of the tunnel were included as a design element and are still recognizable today. On the west side of the Mulde stands the sculpture Schreitender Mensch by Rüdiger Preisler , which is 14 meters high and made of steel girders .

In the north-west of the site is Spreewaldplatz , the former station forecourt with the pool on Spreewaldplatz , which was built from 1984 to 1987 according to plans by the Christoph Langhof architecture firm. In the north, Lausitzer Platz closes the area with the Emmauskirche, built between 1890 and 1893 according to plans by August Orth , separated from the park by the viaduct of the elevated railway line of the first Berlin subway, which runs on today's Skalitzer Straße . In the south, the site borders on the Landwehr Canal and thus on the Alt-Treptow district .

Former Pamukkale fountain and plans to redesign the park

Pamukkale fountain after completion on an information board about Görlitzer Park

One of the essential design elements of the Görlitzer Park was the replica of the famous Turkish sintered terraces of Pamukkale , created by the sculptor Wigand Witting , which was built into the slope on the back of the Spreewaldbad from 1994 to 1997 and completed in 1998. They were built as a place of remembrance for the numerous Kreuzberg residents from Turkey . Due to a faulty substructure and insufficient drainage of the foundations, as well as an incorrect test method for the limestone from Portugal, from which the terrace pieces were cut by the sculptor Wigand Witting and his team, the system was so badly damaged in the first winter that it has been since then is closed to visitors for security reasons. For a long time there was a dispute about the renovation and restoration. In October 2000 the artist was sentenced to pay compensation of 1.1 million euros, the verdict was confirmed in November 2008 in the last instance. In the autumn of 2009 the crumbled fountain structure and its sculptures that were still intact at the time were removed. The demolition of the mighty stone sculptures was not without controversy and led to demonstrative actions by angry art lovers and local residents. Unknown activists then poured large amounts of red paint down the terrace landscape, as a sign of the bleeding of a work of art that was important for the integration and diversity of cultures in Berlin.

The terrace design reminiscent of an amphitheater

The remaining concrete terraces were laid out with artificial turf and now form a seat.

After the fountain was demolished and due to the dissatisfaction of many park visitors with the condition of the park, the Friedrichshain-Kreuzberg district office organized an “ideas workshop” in 2009 to beautify the park. 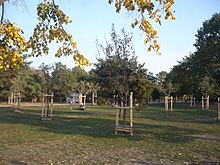 Since 2011, a meadow orchard with apple and pear trees as well as pure claws has been built in the middle of the park, east of the roundabout . In total, there were around 26 trees after the third planting at the beginning of April 2013. In May 2013, family members and friends planted another tree on the meadow in memory of the Kreuzberg actor Eralp Uzun who died in April 2013 .

This fruit tree meadow was brought into being by the Kiezwandlern , a local group of the Transition Town movement, with the support of the district's green space department. Dedicated residents take care of the orchard in voluntary work. The later harvest should be free for all visitors as with a common land .

Drug trafficking in the park area

Görlitzer Park is one of the largest drug transhipment centers in Berlin, where violent incidents between the dealers and buyers with injuries have repeatedly occurred. The dealer scene emerged in parts of the park during the 2000s. Since May 2012 , a permanent patrol made up of employees from the police and the public order office has been patrolling every day . However, the problems persisted.

In November 2014 the working group Taskforce Görlitzer Park , consisting of the police, the public prosecutor's office, the judicial administration, the immigration office and the Friedrichshain-Kreuzberg district , was set up to curb drug crime around Görlitzer Park. As a result of this working group, Görlitzer Park was redesigned. For example, hedges and bushes that could be used to hide drugs were cut away. In addition, the police presence has been greatly increased.

In March 2015, Interior Senator Frank Henkel introduced the zero tolerance rule. As a result, consumers and retailers could be prosecuted even with a small amount. This did not solve the drug problem, however, as many drug traffickers moved to other streets, parks and neighborhoods. On October 16, 2017, the red-red-green Senate lifted the ban again "without much ado", so owning cannabis in Görlitzer Park is again exempt from punishment up to a quantity of around 15 grams.

On June 12, 2018, the statutes of the Park Council Görlitzer Park were signed. The aim of the Park Council is to mediate between different perceptions, needs and interests. The first elections took place between September 20 and 27, 2018. A total of 1248 votes were cast during this time and the first park council was elected. Kora Cherno received the most votes.