The Treptow Park , created in the second half of the 19th century, located directly on the Spree River in the district of Alt-Treptow the district Treptow-Koepenick in Berlin .

The 88.2  hectare park was created in 1876–1888 according to plans by the municipal gardening director Gustav Meyer . The forerunner is the “regulated planting of trees near Treptow” founded by Johann Peter Paul Bouché . It is one of four Berlin parks that have been preserved from the 19th century. The other three are the Volkspark Friedrichshain from 1846, the Volkspark Humboldthain from 1869 and the Viktoriapark from 1894. They were all created to offer the growing population of the city of Berlin sufficient recreational areas. The Treptower Park is special in that it was created from the deforestation of the Köllnische Heide - i.e. the destruction of a local recreation area, of which only the Schlesische Busch and the Alte Treptower Park with an area of ​​around 40  acres remained. Meyer presented a first draft in 1864, which was welcomed by the city ​​administration but not implemented for a long time. Either the money was missing or the drainage of the site was given priority. Meyer was not able to start the preparatory construction work until 1875: He stipulated that work should begin at all outer points on the site at the same time. In doing so, he prevented the city administration from implementing further planned cost-saving measures and from realizing his plans in their original form. The construction costs of the park amounted to 1.2 million marks (adjusted for purchasing power in today's currency: around 8.7 million euros). As a public park , it was - an innovation for the time - open to all citizens and had a large playground and sports field in the middle of it in the form of a hippodrome , 250 meters long and 100 meters wide. Meyer created an artificial pond, the carp pond, near the playground . This was used for fish farming at the beginning of the 20th century. The Puschkinallee served as the central axis, which , as a street with mighty plane trees , still gives an impression of that time.

Meyer did not live to see the completion. He died in 1877, so that his successor Hermann Mächtig completed the work in 1888. But as early as 1882 the Berliners were able to use the park. In honor of Gustav Meyers, the sculptor Albert August Manthe created a bust that was erected in the western part between Puschkinallee and Am Treptower Park in 1890 .

End of the 19th century there was a next to the park observatory located Urnenhalle that had belonged to a cemetery. The two-story, domed building was planned and built according to plans by the architect Carl Zetzsche . It was destroyed in World War II.

Demonstration in Treptower Park (after 1899)

The park has repeatedly been the scene of large demonstrations. Towards the end of the German Empire , rallies against the Prussian three-class suffrage and for peace took place here. Sometimes over 100,000 people gathered.

The Soviet War Memorial was built after the Second World War on the central area of ​​the former playground and sports field on the instructions of the Soviet military administration from 1946 to 1949 and covers an area of ​​around 100,000 m². The memorial is a memorial and a military cemetery of the Soviet war cemeteries and represents the approximately 80,000 soldiers of the Red Army who died in the Battle of Berlin in the final phase of World War II .

From 1957 to 1958, a summer flower garden designed by the landscape architect Georg Pniower was laid out, from which the famous rose garden with 25,000 rose plants, sculptures (such as Achim Kühn's Festival Flower , 1973) and a fountain was created on the occasion of the 20th anniversary of the GDR . In 1971, 1973 and 1975 the Association of Visual Artists of the GDR organized the open-air art exhibition Sculptures and Flowers in this park , in which several sculptures were given a permanent place here .

At the end of the 20th century the park was extensively cared for and in parts historically reconstructed; the carp pond was also desludged.

On the occasion of the soccer world championship 2006 the event popKick.06 took place on part of the Treptower Park . The festival caused great resentment in the run-up to the event, as it was feared that the park would be destroyed for months and that the local fauna would be disturbed by up to 25,000 visitors a day. popKick.06 was organized by the Kulturarena company , which operates a large event area behind the Treptowers .

The organizers reckoned with 7,000 to 10,000 visitors per day. 200,000 visitors came, which corresponds to a daily average of around 7,100 visitors. The organizers described the event as an "unexpectedly great success". The damage to the vegetation was limited. Only a fraction of the 135,000 euros deposited in advance for the restoration of the meadow was needed.

The Treptower Park is structured like the three other parks in the city from the 19th century: Large, sunny lawns and wide, curved paths alternate. In the north the park borders on the S-Bahn station Treptower Park of the Berlin Ringbahn and its tracks. In the southeast it extends to the Plänterwald with the former Spreepark amusement park and the egg house .

On the side of the Spree is the Treptower Hafen, a home port for excursion boats of the Stern- and Kreisschiffahrt . One of the three houseboat colonies in Berlin is located in the direction of the Insel der Jugend (next to the Kolk on Saatwinkler Damm in Plötzensee and the Flutgraben on Straße des 17. Juni in Charlottenburg ). Further to the south-east - at the origin of the old Treptow - is the historic Archenhold observatory .

Art in the park

A fountain with a central fountain up to ten meters high has been bubbling in the area of ​​the rose garden since 1969 . In the vicinity is the fountain gallery flower show , also opened in 1969 - three square basins, each with a low fountain, form a colorful, varied band with flower beds in between.

For various occasions - including the plastic and flowers exhibition as mentioned above - the city put up works of art in the park. These are works by Rolf Winkler (1971), Johannes Belz , Karl-Günter Möpert (1973) and Siegfried Krepp (1975). The bronze sculpture Vier Heinzelmännchen from Werner Richter's workshop followed in the 1980s , placed on the corner of Puschkinallee and Bulgarische Strasse. This work of art showed the brownies as happy goblins romping around on a granite staircase. The good house spirits have been missing since November 19, 2014, the Treptow-Köpenick district office assumes a non-ferrous metal theft and has filed a complaint against unknown persons.

Also worth mentioning is the Wolf and Crane drip fountain by artist Stefan Horota , designed based on a fable by Krylow and set up in 1981 on the waterfront of Puschkinallee.

The Treptower Park with its many small and large meadows as well as the works of art offers a lot of space as a recreation area.

Zenner is an inn and beer garden with a large terrace in the northeastern area of ​​Treptower Park, directly on the Spree , and a popular excursion destination. With around 1500 seats, it is one of the largest in Berlin.

In the 17th century

The Gasthaus Zenner is located on the area of ​​the former Treptow Vorwerk , which is said to have belonged to the Knights Templar before . You were also the owner of Rixdorf . Historical maps show a single path through a forest area from Rixdorf to Stralau, which ended on the southern bank opposite the Stralau castle wall . There was a ford there . The function of the Templar branch on the ford was to secure this important traffic route in the High Middle Ages . Archaeological clarification is no longer possible due to the later basement of the Zenner Inn .

The excursion restaurant was built in the 1820s according to plans by Friedrich Wilhelm Langerhans and was opened as a magistrate's coffee house in 1822 .

In the Berlin address book it is listed in the 1880s under the address Treptow , Ortstraße (without house number) as Zenner's Restaurant with the owner Magistrat and the manager Zenner . The building was described as "balanced and well-proportioned".

During the Second World War , the excursion restaurant as well as the neighboring establishments Spreegarten and Paradies-Garten fell victim to the bombs. 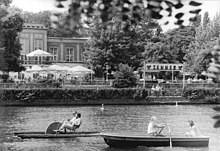 The old walls were torn down in the late 1940s. Hermann Henselmann and his collective planned the new building in the neo-renaissance style , which differs significantly from its predecessor. In 1964, private management was transferred to the HO restaurant business. During this time, a major renovation took place, another floor was added and wings were added. The chimney required for heating was given a tower-like appearance in order to better match the purpose of the house.

After the political change , the now reunited Senate of Berlin took over the inn. Almost no investments were made in maintaining it, so that two outbuildings are no longer stable and had to be closed (as of 2018).

In summer, various cultural events take place on the premises and in the existing rooms. The island of youth can be clearly seen from the terrace . A planned ferry connection with a gondola to the Stralau peninsula failed due to a lack of permits. In addition to the Zenner eggshell, the Zenner house has also been home to a fast food restaurant belonging to a well-known company chain since the 2010s .

At the end of October 2019, the operating companies of the fast-food restaurant and the eggshell filed for bankruptcy due to over-indebtedness , but at the same time the district rewritten the complex. Four interested parties registered, two of whom had kept their offers until mid-January 2020. The well-known inn is due to reopen, which will be quite difficult because of the high monthly rent of 16,000 euros. ( → More pictures )

“I am very pleased that we have found a suitable tenant in Trebow GmbH for the popular and historic excursion restaurant 'Haus Zenner' in Treptower Park. Anyone who has ever visited the popular inn with its huge beer garden and large terrace right on the Insel der Jugend knows that this is a great place for young and old to relax and get together in the middle of the big city. I wish the new tenant every success. "