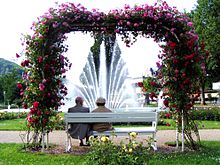 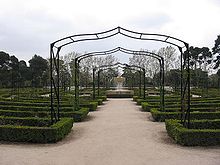 A rose garden ( majority Rosarien , German  Rosengarten ) is a predominantly with roses planted, mostly publicly accessible, usually intended artistically landscaped garden or park, Rose species or varieties to gather from around the world. The rosary , i.e. the counting cord for the rosary prayer, or this form of devotion itself are also called rosary .

Joséphine , wife of Napoleon I , planted the first known collection of roses in Malmaison, not far from Paris . In the year she died, the rose garden comprised around 250 varieties of roses - all of the rose varieties available at the time. Today there is (again) a rose garden there, but it no longer has anything to do with the famous model.

The oldest still existing rosarium was laid out in 1899 by Jules Gravereaux (1844–1916), a French businessman. It is the Roseraie du Val-de-Marne in L'Haÿ-les-Roses south of Paris, the largest rosarium in France .

The rose garden at Coloma Castle 10 kilometers south of Brussels is home to 6,000 rose plants of over 3,000 different rose varieties, with a focus on climbing roses and commercially sold varieties.

The International Rose Garden of Kortrijk ( West Flanders Province ) was laid out on the grounds of Castle Hooghe and presents rose varieties from all over the world. The garden is also a test garden for new rose varieties.

In Germany, the Rosenhöhe Park in Darmstadt is one of the oldest rosary arias, the core of which goes back to the 17th century. The rose island in Bergpark Wilhelmshöhe is also very old . It was laid out in 1766 by Daniel August Schwarzkopf under Landgrave Friedrich II of Hessen-Kassel. Among other things, the "Pearl of Weißenstein" grows there, which was bred and cultivated by Schwarzkopf, the then court gardener of Landgrave Friedrich II., In 1795 and is therefore regarded as the first German cultivated rose. After the Rose Island had been neglected for decades, the Roseninsel Park Wilhelmshöhe Association under the direction of the couple Hedi (Hedwig) and Wernt Grimm has been reviving the Rosarium since 1977 .

Gardens from the early 19th century with a high proportion of roses are the Rosenhöhe Park near Darmstadt (approx. 1810) and the Rosensteinpark in Stuttgart (approx. 1824).

The rose garden in the New Residence in Bamberg goes back to a Renaissance garden that has existed since the 16th century, which was converted into a pure rose garden in the 18th century. Over 4500 roses are now blooming there; there are over 50 different types. The Jena Rosarium existed from the 1930s to the 1960s.

In 1879 Franz Späth , owner of the world's largest tree nursery around 1900 , had a rosarium built in front of the gates of what was then Berlin (in today's Berlin-Baumschulenweg ) next to the arboretum , which can still be visited today , which was destroyed at the end of the Second World War. Since 1963 there has been a public garden of the Humboldt University , department "System, Medicinal and Aromatic Plants".

In Karlsruhe there has been a rose garden in the city garden / zoo since 1899, financed by a foundation from Karlsruhe citizens. It was expanded in 1915 and presented around 11,500 roses in around 70 varieties. It was given its present form for the 1967 Federal Horticultural Show and now houses 170 varieties.

In 1912, work began on building the rose garden on the banks of the Franconian Saale below the Regentenbau in the Bavarian state spa in Bad Kissingen , which was handed over to the population in 1913. At that time, the garden was the only park for the residents of the spa town, as all other state-owned parks and green areas were reserved for spa guests only. Today, visitors to the Bad Kissinger rose garden can admire around 12,000 rose bushes in 155 varieties on around 2.5 hectares.

The first rosarium in northern Germany was built in 1913 in Uetersen under the name Kaiser-Wilhelm-Rosengarten in honor of the 25th anniversary of the reign of Kaiser Wilhelm II. This park was abandoned around 1933 due to lack of space and rebuilt elsewhere. In today's Rosarium Uetersen from 1934, over 35,000 roses and 1,020 different rose varieties, including 200 historical ones, can be admired on 7 hectares.

In 1968 some rose beds were laid out on the site of a former garbage dump on the outskirts of Seppenrade . This little rose garden has been expanded three times over the years. It is currently 18,753 m². There are around 600 varieties of roses and 24,000 rose plants in the garden.

The Rosarium, founded in Wilhelmshaven in 1989, is currently home to over 3,000 roses from around 500 varieties on an area of ​​4 hectares.

The Glücksburg Rosarium in the north of Schleswig-Holstein was opened in 1991 in a former part of the castle park and houses over 500 varieties of roses on an area of ​​around one hectare, including mainly historical varieties and Germany's largest collection of English roses .

In the Killesberg Park in Stuttgart, 18,000 roses in 400 species and varieties bloom in the “Valley of Roses”, which were planted for the 1993 International Horticultural Exhibition.

In the open-air museum Roscheider Hof there is a small rose garden with around 100 varieties as part of the bourgeois living culture. 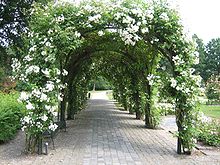 The Roseto Comunale in Rome is a public garden in Rome that has existed since 1931, which is located opposite the Circus Maximus on the Aventine hill and houses 1200 varieties of roses on an area of ​​more than 10,000 m². Another 350 varieties are tested in the rose test garden.

The Roseto di Cavriglia in Cavriglia , Arezzo, is the largest private rose collection in Europe with 7000 varieties.

The largest rosarium in the Netherlands is located in Winschoten ( Groningen province ). 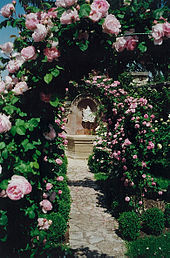 Kaisersteinbrucher rose garden with a view of the European fountain

There are several rose arias in Vienna itself - the rose garden in the Volksgarten is probably the best known. Further rose gardens can be found in the Danube Park , in the garden of the Hermesvilla and in the Schönbrunn Palace Park . In Wettstein Park on the Danube Canal existed from 1934 to 2015 a rose.

In Baden there has been a rosarium in the publicly accessible Doblhoff Park since 1969 with 25,000 rose plants and around 900 different varieties on 90,000 square meters, both modern and historical rose varieties, including around 40 varieties from the rose breeder Rudolf Geschwind . An international rose show takes place here every year in June, where thousands of cut roses are presented in the baroque orangery.

On June 14, 2001, Governor Hans Niessl opened the baroque rose garden "Stein und Rose" in Kaisersteinbruch . In this way, a park with historical English roses was created in front of the Europe Fountain with the "Wall of Unity" . This was the first step towards a “garden road” along the Leithagebirge .

Another Rosarium from Burgenland was built in 2003 in the spa town of Bad Sauerbrunn . There over 1600 roses of 300 varieties can be admired on 4000 square meters. The fragrant rose garden for the blind is also a special feature.

Giovannis Garden is a rose garden of 1400 rose varieties and a focus on historical roses in Graz .

In 1913, the “Rapperswil and Surroundings Transport and Improvement Association” had the rose gardens set up in Rapperswil at the Fischmarktplatz on Lake Zurich , followed by further plantings on the lakeshore in the early 1920s and on streets and squares in the densely built-up old town . Rose gardens in the real sense followed around 1965 a. a. at the hermitage in the former orchard of the Capuchin monastery. A cross-national specialty is the fragrant rose garden for the visually impaired in the city center, which was planted in 1984 with around 1,500 roses from 75 different types of scent, all signposted with Braille and normal writing. Between June and October a total of around 15,000 hybrid tea roses, polyantha and shrub roses bloom in the gardens and alleys of the rose city .

The largest rosarium in the Czech Republic with over 25,000 rose bushes is located on the site of the Lidice Memorial , 20 kilometers northwest of Prague . The internationally awarded rose garden in Lidice was opened in June 1955 on the initiative of the Lidice shall live campaign .

Notable rose gardens in Australia are among others

The government rose garden in Ooty is located at 2250 meters above sea level and is one of the largest in India with 2800 rose varieties and over 20,000 rose bushes on an area of ​​4 hectares. Due to the unique climatic conditions without significant temperature changes over the year, the blooming time of the roses is very long.

Another large rose garden in India, the Zakir Hussain rose garden, is located in the Chandigarh Botanical Garden with over 50,000 rose bushes and 1,600 different varieties. With an area of ​​120,000 square meters, it is one of the largest in Asia. One of the oldest rose gardens in India, on the other hand, is the rose garden in Bangalore in Lalbagh, which was laid out by Hyder Ali in 1760 .

The city of El-Kelâa M'Gouna is known as the rose city of Morocco . It is bordered by the valley of roses , a large rose-growing area that also houses a rose park.

The well-known rose gardens in the United States include