Friedrich II., Landgrave of Hessen-Cassel in a painting by Johann Heinrich Tischbein the Elder. Ä. 1773

Friedrich II. (Born August 14, 1720 in Kassel ; † October 31, 1785 in Weißenstein Castle , Kassel) from the House of Hesse was Landgrave of Hesse-Kassel from 1760 . He was the first and only prince of Hesse-Kassel after the Reformation to convert to the Catholic faith. He became known as the first prince of the Enlightenment in Hesse, but also through his soldiers leasing in the American War of Independence .

Friedrich was the only son of Landgrave Wilhelm VIII , apart from an older brother who had died as an infant . After education and schools in Geneva and Lausanne , he married Maria in 1740 , a daughter of King George II of England (1683–1760) and Margravine Caroline of Brandenburg -Ansbach (1683-1737). From 1741 he fought with the Hessian troops for Emperor Karl VII Albrecht in the War of the Austrian Succession and was promoted to lieutenant general during this time. In February 1749 converted Frederick during a visit to the Elector and Prince Bishop Clemens August in the residence Neuhaus ( Bishopric of Paderborn ) secretly to the Catholic faith. Thereupon his wife Maria separated with his three sons Wilhelm (1743-1821), Karl (1744-1830) and Friedrich (1747-1837) from him. In the Hessian Insurance Act of 1754, his father ordered him to leave the Protestant religion in Hesse untouched, and gave Maria and the children the county of Hanau-Münzenberg , which was separated from Hesse-Kassel. Friedrich never saw his wife and his children only again in 1782.

After the death of Landgravine Marie, he married Princess Philippine of Prussia (1745–1800) from the Brandenburg-Schwedt branch in 1773 . This marriage remained childless.

In the Seven Years' War , Friedrich sided with Prussia. He was appointed General and Vice-Governor of Wesel . He received the 48th Infantry Regiment, but still the 45th Infantry Regiment in 1757. In the same year he became Governor of Wesel and bearer of the Order of the Black Eagle . He fought in the Allied army in Moravia and Silesia until the end of the war. In March 1759 he was promoted to general of the infantry.

In 1760 Friedrich became Landgrave of Hesse-Kassel and made several unsuccessful attempts to reunite the County of Hanau with Hesse-Kassel, which failed due to resistance from Great Britain and the Protestant estates. On May 14, 1760 he was appointed Field Marshal General.

After the war, building activity began in Kassel, which the Landgrave supported and promoted. He settled industry and manufacturers in Hesse, he brought artists and scholars to Kassel. The first freely accessible museum on mainland Europe, the Fridericianum , was established in 1779. In 1777 he also founded the Academy of Arts . As his best-known work of art, he acquired the Kassel Apollon in 1777 , which was found in 1721 near the modern town of Sabaudia south of Rome. It was bought by Friedrich during a trip to Italy, is a copy of an original statue by the sculptor Phidias and is now on display in Wilhelmshöhe Palace in Kassel. In 1779 he was elected a member of the Académie des Inscriptions et Belles-Lettres in Paris.

The financial means for this project came from the rental of soldiers to other countries, which was common in the 18th century , primarily to the Roman-German Emperor, France and Great Britain. His father sent Hesse-Kassel troops to Great Britain in 1756 to protect the island from a feared French attack. However, they did not have to be used and fought in West Germany in the Seven Years' War. England needed troops for the American War of Independence and Frederick and other German princes provided King George III. over 20,000 soldiers for the war in America. For this purpose, Friedrich's Minister von Schlieffen concluded treaties with England that made Friedrich one of the richest princes in Europe. 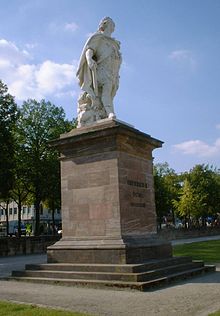 Monument to Frederick II on Friedrichsplatz in Kassel

The soldier trade makes the prince a target of criticism up to the present day. Under the circumstances at the time, however, this deal was understandable due to economic and military considerations: Hessen-Kassel found itself dependent on a strong army due to its central location, but was unable to do so due to the devastation of the Seven Years War, which caused profound damage to economic life on Hessian territory had difficult to maintain the necessary troop strength from its own resources. On Friedrich's orders, the troops were not allowed to be recruited by force or force and promised a secure livelihood for many Hessian volunteers.

The criticism of the provision of troops is mostly limited to Frederick II, although other feudal lords of the time, as well as the republican-ruled Switzerland , proceeded similarly. A closer look at the financial conditions under which the Hessian troops were deployed in North America shows that payments to Hesse were due for permanently damaged, fallen or dead soldiers, some of which went to charitable foundations, which existed until the inflation of the 1920s had.

Because of the large proportion of Hessian soldiers in the British auxiliary troops, the term Hessians is still used in the USA to refer to all German auxiliary troops during the War of Independence. See also blood dollars . 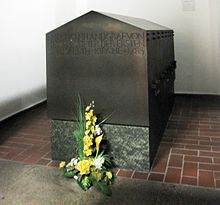 Sarcophagus of Landgrave Friedrich II in the Church of St. Elisabeth in Kassel

Landgrave Friedrich II died on October 31, 1785 in Weißenstein Castle near Kassel and was buried in the Catholic Elisabeth Church at the eastern end of Friedrichsplatz in Kassel, which he founded and built from 1770 to 1777 .

After the heavy air raid on Kassel on October 22, 1943 , the Elisabeth Church burned down. The ruin was not rebuilt, but blown up in 1954. As a replacement, today's Sankt Elisabeth church was built on the other side of Friedrichsplatz in 1959/60 and consecrated in November 1960. The mortal remains of Frederick II were transferred to the new building, today his modern sarcophagus stands on the stair landing to the gallery.

From his first marriage to Maria von Hannover came:

His second marriage was childless.