This article is about the ancient sculptor. For other meanings, see Phidias (disambiguation) .

Phidias ( Greek Φειδίας Pheidías ; * around 500/490 BC in Athens ; † around 430/420 BC) was an ancient sculptor and Toreut . He is considered one of the greatest sculptors of antiquity and a prominent representative of the Greek high class . His works have been completely destroyed and today only copies are available. The most famous works are the 12-meter-high statue of Zeus in Olympia , which was one of the Seven Wonders of the World , and the Athena Parthenos in Athens.

The Zeus statue of Phidias on a coin from Elis

Phidias was born around 500/490 BC. Born in Athens as the son of Charmides (not to be confused with the Athenian politician Charmides ). Otherwise very little is known about his life. A rough outline of life can be made visible simply by describing his work.

It is very likely that Phidias was in close personal contact with the radical democrats who died in 462/461 BC. Came to power in Athens and their most famous representatives were Ephialtes and Pericles .

There are two contradicting lines of tradition in the last phase of life. According to one tradition, after Phidias had completed the statue of Olympian Zeus, the opponents of Pericles charged him with stealing gold from the previously created statue of Athena Parthenus . However, he was able to evade this accusation. Thereupon Pericles' opponents accused him of blasphemy because he had depicted himself and Pericles on the shield of Athena Parthenos, and he was imprisoned. Allegedly, he died shortly after of poisoning. According to another version, he was able to flee to Elis and only created the statue of the Olympian Zeus after being charged and escaped in exile. The date of death, even the end of his creative period, is now generally unclear and is more likely to be around 420 BC. BC than around 430 BC Adopted. There is no established reason to see his last work in the statue of Zeus.

Phidias received first-class training from the sculptors Hegias and Ageladas von Argos , who is also said to have been the teacher of Myron and Polyklet . The training included not only stone sculpture, but also hollow bronze casting in lost form . Building on these processes, Phidias later developed the art of combining different materials such as marble, bronze, glass, gold and ivory in his works of art .

The earliest work with which Phidias demonstrated his skills was an athena statue made of gold and ivory for the temple in Pellene in the northern Peloponnese . It should be around 465 BC. BC.

The Athenians' dedication to the marathon in Delphi

Phidias' first major work was a bronze group that was financed from the tithes traditionally reserved for the gods from the battle of Marathon (490 BC). It comprised the ten bronze statues of the Attic Phylenheroes : Aias , Aigeus , Akamas , Antioches, Erechtheus , Hippothoon, Kekrops , Leos , Oineus and Pandion . In addition, Athena may have been represented as the patron goddess of Athens and Apollo as the patron god Delphis . They stood on a 16 m long base in front of the Treasury of the Athenians in Delphi. The 10 Phylenheroen were an expression of the victory of the young democracy over all internal and external enemies. At the same time, the monument deliberately set itself apart from the political system of tyranny , with reference to the kleisthenic reforms . Further heroes as well as a statue of Miltiades , about which Pausanias informs us , must be seen as a later, propagandistic decoration and use of the monument, as well as the addition of three Ptolemaic kings, who in Hellenism like to be brought close to the marathon victory as phylenheroes.

Even if the work itself is lost, its formation gives us very important information regarding the marathon battle. The heroes are said to have been poured as a sacrificial gift from the booty of victory. This celebrated the survival of democracy, which would have ended in the event of a Persian victory. Immediately after the battle, the importance of marathon was limited to Attica. When Herodotus made Athens progress in the 5th century B.C. Called the “pioneer of the Greeks”, he took up a purposefully scattered propaganda that was so efficient that it is still effective today. However, the Phylenmonument of Phidias provides us with the first and decisive chronological evidence that the marathon did not have the importance for Greece that was later assigned to it.

The approximately 3.50 m high statue of Athena Areia stood in the temple that the Athenians had built on the battlefield near Plataiai in honor of the victory over the Persians. Robes and weapons were made of gold, the goddess's bare skin of marble.

The statue may have come down to us in Roman copies of the Athena Medici type . At the base was the portrait of Arimnestus , who had commanded the Plataier contingent in the battles of Marathon and Plataiai .

Phidias' statue was the center of an ensemble to which the painters Polygnotos and Onasias had contributed with wall paintings. The killing of the suitors by Odysseus was depicted in Polygnot's painting, while Onasias's painting depicts the Seven's first campaign against Thebes .

The pictorial program of this ensemble was directed primarily against the internal enemies of Athens. Athena , the patron goddess of the city, usurped the insignia of Ares , the patron god of Thebes , who had been on the side of the enemy during the Persian Wars and was an ally of Sparta . Onasias' painting showed where fraternal strife leads, namely to the fall of the rulers of Thebes; Polygnotos made clear the punishment of those who break divine laws.

Phidias probably began around 460 BC. To work on the nine meter high bronze statue; around 450 BC The work should have been completed. It adorned the Acropolis in Athens. The 5 × 5 m base for the statue can still be seen today. Remnants of the inscription, which report that the statue was financed from booty money, have been preserved.

The Athena Promachos is very poorly transmitted. Coin images show that she held out her right arm, on which Nike , the goddess of victory, was written. A shield leaned against the goddess's left leg, and a lance against her left shoulder. The battle of the Greeks against the Centaurs was depicted on the shield . It was worked by Toreut Mys and the painter Parrhasios . After the Persian Wars, the fight against the Centaurs was understood as a metaphor for the fight against the Persians.

The Athena Parthenos, which stood in the Parthenon on the Acropolis of Athens, has been handed down in numerous reduced Roman copies . The colossal statue was 11.5 m tall. Phidias used ivory in the creation of Athena Parthenos, and around 1000 kg of gold were used for clothing, sandals and helmet.

On the outside of the 4.80 m round shield, the battle of the Athenians and Amazons was shown in relief, on the inside the battle of the gods and giants can be seen as a painting. Nothing has survived from the painting, but the relief can be reconstructed with great certainty:

In Nashville ( Tennessee ) there is a true-to-scale replica of the Parthenon together with the 11.5 m high colossal statue of Athena Parthenos.

Phidias and the Parthenon

The question of the extent to which Phidias was involved in the planning and execution of the sculptural jewelry at the Parthenon played a major role in earlier Phidias research. Plutarch reports that because of his friendship with Pericles , Phidias was in charge of or supervising all work on the Acropolis . Some researchers have deduced from this that Phidias designed the program of the images, which - the research leaves no doubt about this - was then carried out by several masters, so Phidias was in a certain sense the creator of the sculptural jewelry.

Today the prevailing opinion is that Phidias was more of a mediator between the various sculptors. As the city of Athens commissioned the Parthenon, all related issues (including artistic ones) were submitted to the people's assembly , which decided on them in a democratic manner. One can imagine that such an outstanding artist and influential politician as Phidias presented a program developed by him to the popular assembly for decision and thus prevailed. So Phidias was not the great, all-superior genius who only obeyed his own law and created art in insurmountable opposition to a mass of people who hardly or not at all understood it, but was integrated into Athens' democratic structures; it was not his own art law that was his highest principle, but the will to serve Athens and its democracy. In this respect, the sculptural decoration on the Parthenon must be seen as the joint work of all Athenians.

The helmetless, larger than life statue of Athena Lemnia made of bronze is believed to have been around 450 BC. BC and was erected on the Acropolis in Athens. In the inscription, the clergy of the island of Lemnos was named as the donor . Clergy were Athenians who were sent to the allied territories and received land there and represented Athens' interests.

The goddess is not helmeted, so not ready for battle. She looks calmly at the helmet she is holding in her right hand. The spear, however, is leaning against her left shoulder; it illustrates their ability to fight.

Probably because of its uncomfortable appearance, the statue was considered Phidias' most beautiful in antiquity. It is very likely that copies have been preserved. A reconstruction that goes back to Adolf Furtwängler can be seen in Dresden .

The statue of Zeus from Olympia

The 12 m high statue in the Temple of Zeus at Olympia rested on an inner frame made of iron, plaster and wood, was clad on the outside with sheet gold , ivory and ebony and was erected using the so-called chryselephantine technique. The face, hands and feet of the wooden or marble figures are clad with gold sheet and ivory and decorated with precious stones and cast colored glass.

During excavation work in Olympia near the Temple of Zeus, the remains of the workshop of Phidias and in it remains of material, tools etc. were found, as well as a ceramic cup with the words: ΦΕΙΔΙΟΥ ΕΙΜΙ ( Φειδίου εἰμί Pheidiou eimi "des Pheidias [property ] I am"). 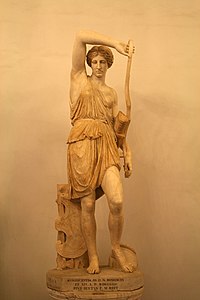 Ancient writers report on an Amazon monument in the Temple of Artemis in Ephesus . Phidias, Polyklet , Kresilas , Kydon and Phradmon each made an Amazon statue. Judging by the style of the bronze statues , the monument was probably around 430 BC. Have been erected. The statues of Polyklet, Phidias and Kresilas can be found in copies, the surviving types of statues " Sosikles ", "Mattei" and "Sciarra" go back to the competition. The allocation of Amazon types to individual artists is still controversial today.

The Amazons were the legend was coming invaded from the east to Attica and defeated by the Greeks. The survivors had found refuge in Ephesus . There the "male-murdering" female warriors had become women who married Greeks and from then on led a domestic life. The Amazons were understood by the public at that time as a symbol of the defeated invaders. They stood for the fate of those who dared to stand against Athens.

Aphrodite Urania in Elis at Olympia

Pausanias reports about an Aphrodite Urania made of gold and ivory , which was set up in the Temple of Aphrodite in Elis . The statue's left foot rested on a small turtle. A Roman marble torso in the Pergamon Museum in Berlin (inventory number Sk 1459) may have handed down the statue. Stylistically, the work can be assigned to the 430s.

Pausanias reports of a statue of Apollo in Athens, which is ascribed to Phidias (compare 1, 24, 8). The statue held a bow in one hand and a grasshopper in the other. The so-called Kassel Apollon , the best preserved copy in a whole series of marble copies of a bronze sculpture, is identified as Apollon Parnopios and assigned to Phidias. Remains of a bow and arrow are found in one hand of the Kassler sculpture.