After the destruction by the Persians , Perikles had the oldest part of the city of Athens rebuilt by the architects Iktinos and Kallikrates and Mnesikles under the direction of the famous sculptor Phidias . On a flat, 156-meter-high cliff stand between 467 BC. BC and 406 BC The Propylaea , the Erechtheion , the Temple of Nikes and the Parthenon were built in the 4th century BC , in which there was a colossal statue of the goddess Athena made of gold and ivory . A greatly reduced replica of the statue is in the National Archaeological Museum in Athens.

The Acropolis in Athens is the part since 1986 UNESCO - World Heritage Site . According to Theodor Heuss , the Acropolis, along with Golgotha and the Capitol, is one of the hills on which Europe is founded. For the same reason, the Greek state has awarded the Acropolis the European Heritage Label .

History of the Acropolis

From the fortress to the temple district

Northwest side of the Acropolis

The Acropolis of Athens is the large castle hill in the heart of Athens, consecrated to the city goddess Athena. Traces of settlement go back to the Neolithic Age . In Mycenaean times it was from the 14th century BC. BC, when large parts of Attica were controlled and administered from Athens, seat of the king ( Wanax ). In the 13th century BC Chr. The later Pelargikon or Pelasgian walls ( Πελασγικόν τείχος ) called cyclopean built defensive wall, which also provides access to a source with included so that the water supply in case of siege could be maintained. Later, in democratic Athens, it was expanded as the seat of the gods (temple district) and lost its defensive function. After the victory over the Persians, Athens became the dominant power of the Attic League from 448 BC. Under Pericles to the center of the Hellenic world. One wanted to demonstrate this power and the wealth associated with it through buildings, especially since the Persians took the city in 480 BC. Destroyed the main temple of the Acropolis from archaic times (remains can be seen in the local museum). 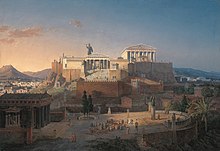 Idealized view of the Acropolis with Athena Promachos and the Areopagus ( Leo von Klenze , 1846)

The Erechtheion from the southwest

The Acropolis was completely redesigned under Pericles by the builders Iktinos , Mnesikles and Kallikrates under the direction of the brilliant sculptor Phidias . The Propylaea designed by the architect Mnesikles was created as a magnificent entrance system at the head of a new access ramp. In the north wing there was, among other things, a picture gallery .

The Temple of Athena, known as the Parthenon , the main temple of the complex with the image of Pallas Athena, was rebuilt. For this purpose, the rubble of the old Temple of Athena further north was used to fill a new, huge plateau. This formed the foundation of the new temple, which was deliberately moved out of the axis of the old temple so that from the Propylaea you can see the entire structure at a glance and not just one (narrow) side, as with the old temple. The Parthenon lies at the head of the old temple area, which today forms the free center of the complex. Here the sacrifices of the Panathenic feast days were held in the open air .

The Erechtheion , located on the north side of the hill, is the second largest temple in the complex. It is a complex structure dedicated to several gods and mythical heroes of the city. The complex owes its name to the mythical King Erechtheus, whose palace is said to have stood there and who was also venerated there. In the east it housed an altar of Athena and the old wooden cult image of the goddess, which was clad again in the course of the Panathenaic Mountains. To the west, a little lower, was the altar of Poseidon, who lost the competition for the favor of the Athenians against Athena. The traces Poseidon's trident is said to have left in the rock were also shown there. The most famous wing of the Erechtheion is the Korenhalle on the southern side, facing the Parthenon, where female figures ( caryatids ) replace the columns. The Athenian ancestors rest in the crypt below; several gods were also worshiped there. Immediately to the west of the building stood the sacred olive tree that Athena is said to have given to the Athenians, who then named the city after her. Today you can see a "successor" there.

The Niketempel is located in the west of the castle hill, southwest of the Propylaea, and is the smallest and most delicate temple in the complex. It is attributed to Kallikrates and was built later than the rest of the complex. The establishment happened after the reign of Pericles and against his wishes. It is consecrated to Nike apteros, the "wingless" goddess of victory.

The large Panathenaic Festival in honor of Athena took place every four years, and in the intervening years the so-called small Panathenaic Festival, a structural framework and a stage were created. The procession went across the city from the Dipylon, the large four-tower city gate in the Kerameikos , over the agora and the wide ramp up to the acropolis, where the goddess was presented with her new robe. The Panathenaic pageant is also the motif of the famous Parthenon frieze (today mostly in London , British Museum ).

Other buildings were added in Roman times , including the temple of the Roma and Augustus east of the Parthenon. After the attacks of the Heruli in Athens in 267, the Acropolis became a fortress again . For this purpose, two bastions west of the Propylaea, which flanked the access road to the Acropolis, were connected by means of a gate system. The gate system from the late 3rd century, discovered in 1852, is named the Beulé gate after its excavator Charles Beulé . For their construction, parts of the choregic consecration gift, the Nikias 320/319 BC, were used. Had donated to the Acropolis. The facility was directly integrated into the newly built wall of the lower town, the so-called Valerian Wall.

In the 6th century, the Parthenon Temple was converted into a Christian Church of Mary with appropriate structural changes.

The Acropolis also served as a fortress in the Middle Ages. Under the Byzantines the provincial governor sat there, while the Parthenon, as the Church of the Virgin Mary, was the Athens Episcopal Church. He fulfilled this function even after the conquest by the Crusaders in the 13th century, only under Catholic auspices. During the time of the "Frankish rule" the Propylaea served as the palace of the Dukes of Athens .

The Parthenon as a mosque

After the Ottoman conquest in 1456, the Parthenon was converted into a mosque and a minaret was added. The city commandant temporarily resided in the Propylaea; the Erechtheion, previously a church, served as a harem (probably because of the female figures). Until well into the 17th century, the ancient monuments were largely intact, apart from overbuilding (e.g. the expansion of the Propylaea into a bastion).

The catastrophe for the Acropolis came in 1687 with the siege by the Venetians under Morosini , who, against his better knowledge of the importance of the buildings, had the Parthenon bombarded. The explosion of the Turkish powder magazine there severely damaged the temple and surrounding buildings. A few years earlier, a powder magazine in the Propylaea had probably exploded from lightning.

The Acropolis 1868, in the foreground the Temple of Zeus

The destruction was finally completed by the British ambassador to Constantinople, Lord Elgin , when, from 1801 onwards, he brought a large part of the sculptural decoration of the Parthenon as well as a kore from the Erechtheion, reliefs from the Niketempel and other parts to London.

When Greece gained independence , the Temple Mount was declared an archaeological site and all buildings that did not originate from ancient times were removed. This affected Byzantine, Frankish and Ottoman buildings as well as the mosque in the Parthenon (built in 1687), known for its paintings. Nowadays, this measure is often criticized as cleaning up history. However, otherwise it would hardly have been possible to recover many architectural and sculptural parts integrated into later buildings (including the entire Niketempel, which was used to reinforce the fortress walls) or to carry out excavations (for example the archaic sculptures from the “ Persian rubble ” today in the Acropolis Museum). In addition, the ideological situation of that time should not be underestimated (enthusiasm for antiquity, foundation of the state of Greece).

Further restorations took place mainly in the 1930s, with iron brackets used in ignorance of the consequences which, unlike the antique brackets, were not protected from the weather. The corrosion damaged the marble. Components were also often used in the wrong place. To correct these mistakes, a new, ambitious restoration program has been running since the 1980s. So far only the Erechtheion has been completed; The Nike Temple is being rebuilt after the foundations have been secured, while work on the Propylaea and the Parthenon (which will ultimately be more complete than we know it so far) is still dragging on.

Dimitris Pikionis redesigned the network of paths around the hill of the Acropolis from 1951 to 1957, as well as the paths of the opposite Philopappos hill. The individual slabs of the paths are designed like spoilers and can be read as a long, walkable work of art.

On the right the Neues Museum

Between 2002 and 2007, the New Acropolis Museum designed by Bernard Tschumi was built at the foot of the Acropolis , with which Athens wants to emphasize, among other things, its demand for the return of the Parthenon sculptures from London. The old museum on the castle hill was closed and should either be demolished for excavations (one suspects the workshop of Phidias there) or an exhibition on the history of the acropolis and the archaeological excavations as well as a café. The parts of the Parthenon frieze in the previous museum were transported to the new museum from October 2007, which was officially opened on June 20, 2009.

The mint Micromeria acropolitana was native to the Acropolis and was held for more than 100 years to be extinct. In 2009, a specimen was rediscovered by Grigorios Tsounis, a Greek biologist, and his 17-year-old son while walking on the rock and clearly identified by botanist Kit Tan.

In 2011, 2,250 high-resolution photos of the wall of the Acropolis were taken with a meteorology balloon to determine whether there were any cracks. Five friezes ( metopes ) of the Parthenon were discovered, which had been built into the south wall after 1687. The metopes are to be recovered and taken to the other parts of the frieze in the Acropolis Museum.