Tiryns ( ancient Greek Τίρυνς , modern Greek Τίρυνθα Tíryntha ( f. Sg. )) Is an ancient city in the Peloponnese about 7 km southeast of Argos on the Argolic Gulf . The city extended on a limestone rock up to 30 meters high, which is around 300 meters long and 40-100 meters wide. Originally, the coast ran closer to the settlement and during the Early Bronze Age was at times only about 300 meters from the settlement hill. The place was settled from the Neolithic (New Stone Age). From the 3rd millennium BC BC Tiryns was one of the most important centers of Bronze Age Europe .

According to legend, Tiryns was founded by Proitus . He had the fortification wall of Tiryns built by Cyclops from Lycia . Proitus was the brother of Akrisios, whose grandson Perseus is said to have founded Mycenae during his reign in Tiryns . Two generations later, Heracles served King Eurystheus , grandson of Perseus, for twelve years to atone for the killing of his own children. During this time he completed his famous twelve works . Part of the legend about the hero Bellerophon is also set in Tiryns.

The mighty Mycenaean fortification wall was always visible in antiquity and up until the first excavations in the 19th century. Therefore an identification of the place with Tiryns was never disputed, which is why many travelers and archaeologists paid attention to the place. In the 2nd century AD, Tiryns was visited by Pausanias , who was so impressed by the defensive walls that he compared them in his work Description of Greece with the pyramids of ancient Egypt .

After the Greek literary scholar Alexandros Rhizos Rhankaves and the German philologist Friedrich Thiersch undertook a one-day excavation at the upper castle in 1831, the German archaeologist Heinrich Schliemann carried out the first systematic excavations between 1876 and 1885. He was able to expose the so-called upper castle, a Mycenaean palace, on the highest part of the rock . The later excavations under the direction of Wilhelm Dörpfeld , Kurt Müller and Georg Karo , which were carried out between 1905 and 1929, gave further conclusions about the once outstanding importance of the city in prehistoric times. Since 1976 Tiryns has been systematically researched by German archaeologists , until 1986 under the direction of Klaus Kilian , later under the direction of other researchers from the University of Heidelberg and the German Archaeological Institute . Joseph Maran has been leading the ongoing (as of 2020) research projects in Tiryns since 1994 .

The elongated settlement hill is divided into three sections by slope and natural conditions: the so-called upper castle, middle castle and lower castle. The earliest human traces come from the middle Neolithic (approx. 5900-5400 BC). The remains of an imposing rotunda on the upper castle, around which other buildings from that time were found, prove that there was an important settlement there as early as the Early Bronze Age ( Early Helladic ). The finds date to the Early Helladic II, approx. 2500–2200 BC. Also in the Early Helladic III (FH III) and the following Middle Helladic Tiryns seems to have been settled. 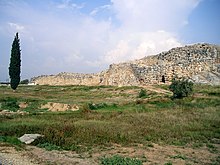 Wall painting in the Palace of Tiryns

In the late Helladic (Mycenaean) period (approx. 1600-1050 BC) Tiryns, like Mycenae , Thebes , Pylos and Knossós, was one of the most important centers of the Cretan-Mycenaean culture. At that time there was also an extensive lower town that surrounded the settlement mound. The very well-preserved ruins of a royal residence on the upper castle, the walls of which were decorated with precious frescoes , and the remains of the fortification walls built in Cyclopean style ( Cyclops masonry ) testify to the former splendor of the city . The bricks of the wall were up to three meters long and three meters thick and joined together without mortar. The wall has several construction phases: At first (at the latest from the 14th century BC) only the upper castle was protected. Around the middle of the 13th century BC The entire middle and lower castle was included. Finally - around 1200 BC BC - cisterns were also integrated.

Despite these seemingly insurmountable fortifications, Tiryns was built in the early 12th century BC. Chr. (At the transition from SH  III B to SH III C, approx. 1190/80 BC) destroyed by a fire disaster. Instead of enemy influence as the cause, the excavator Klaus Kilian, due to the location of rubble, collapsed walls and individual finds, assumed a severe earthquake , which probably also caused the approximately simultaneous destruction of Midea . Kilian's interpretation met with broad, if not undivided support. From 2012, the theory was verified by geophysical and archaeo- seismic investigations carried out as part of the HERAKLES project by the Bensberg earthquake station in collaboration with the excavation team from Heidelberg University. The results make an earthquake unlikely to be the cause of the destruction; a major earthquake that destroyed Tiryns and Midea is therefore "hardly an option" and there is "so far no evidence" for locally limited earthquakes as the cause of the destruction in Tiryns. At about the same time as Tiryns was destroyed, the lower town south of the castle was flooded and buried under a layer of mud. It is believed that a possible earthquake triggered a mudslide and the stream that flowed south of the castle swelled, overflowed and flooded the houses. Due to the mud deposits, the stream changed its course and now flowed north of the castle.

The damage to the wall was subsequently repaired and the upper town was rebuilt. Even the palace on the upper castle was partially used. A new building was built into the ruins of the old palace and occupied by leading nobles. The lower town even seems to have been systematically expanded after the disaster. This finding is in contradiction to the partial depopulation in other Mycenaean palace centers in the 12th century BC. The city outside the walls was rebuilt on top of the mud layer. To prevent further disasters, the Tiryns dam was built 4 km west of the castle and the stream was diverted to the south.

On the basis of early archaic inscriptions and found offerings, the worship of the gods Zeus and Athena can be proven for the archaic and classical times .

Isolated settlements of Tiryns can also be traced back to Hellenism , from Roman times to Byzantine times (10th-14th centuries AD). A Tholos grave has been excavated about 1 km east at the western foot of the Profitis Ilias hill . On the eastern slope of the hill was a necropolis with Mycenaean shaft graves .

Schliemann already reported on the discovery of a cobalt blue glass bead and other small glass finds in Tiryns. In more recent excavations, the existence of a glass workshop was proven by finds of molds and waste products from glass processing. This is believed to be around 1300–1200 BC. And is therefore one of the oldest documented glass processing workshops in Europe. The processed raw glass was presumably imported, the dark blue and turquoise glasses found are similar in color and composition to the raw glass cylinders found in the ship from Uluburun .