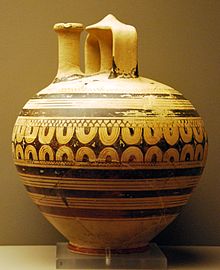 Sub-Mycenaean jug from the Museum of Cycladic Art in Athens .

As Sub-Mycenaean pottery a style of ancient Greek pottery is called. The style combines the Mycenaean ceramic styles , especially the late Mycenaean style, with the subsequent styles of protogeometric ceramics . The vases are made between 1030 and 1000 BC. Dated.

Sub-Mycenaean ceramics are still very poorly documented, as only relatively few sites are known due to the sparse population in many regions of Greece at that time. The style was first recognized in 1939 by Wilhelm Kraiker and Karl Kübler on the basis of finds on the Pompeion in the Kerameikos cemetery in Athens and on Salamis , but Arne Furumark classified the ceramics as LH III C 2 a few years later . The independence of the Sub-Mycenaean style was long disputed among archaeologists until late Mycenaean and Sub-Mycenaean finds were found in separate stratigraphic layers in Mycenae . The vessels were found mainly in body burials and in stone box graves. The sites are widely scattered, which speaks for ways of life in small settlements. In addition to the places already mentioned, Sub-Mycenaean ceramics were found in Corinth , Asine , Kalapodi , Lefkandi , Tiryns and at various sites in the northwestern Peloponnese . In Western Anatolia, too, pottery was found at some sites that is classified as Sub-Mycenaean. Beyond the Adriatic , ceramics of the Sub-Mycenaean style were found in Roca Vecchia in Apulia , while the most recent examples of Mycenaean or Mycenaean ceramics from the Apulian Punta Meliso ( Santa Maria di Leuca ) cannot be determined with certainty whether they are stylistically sub-Mycenaean or even later SH III C ceramic are to be assigned. The vast majority of the finds come from graves, in settlements usually only a few shards came to light.

The quality of the vases is very different. Only a few shapes were made, mainly swing jugs with an air hole in the shoulder, belly and neck-handle amphorae , lekyths and jugs, some of which had cloverleaf mouths. Towards the end of the Sub-Mycenaean period, the jugs were displaced by Lekyths. While the vessels from settlements were the usual size in the late Mycenaean period, the grave vessels are usually much smaller. The decoration is simple, the hand-painted motifs are limited to horizontal and vertical wavy lines, simple, double, hatched and overlapping triangles and single or concentric semicircles. The shoulders of the lekyths, amphorae and swing-handle jugs were decorated with ornaments. Amphorae, amphoriskoi and jugs were usually painted with a more or less thick wavy line.