View of part of Salamis Island

Salamis ( ancient Greek and Katharevousa Σαλαμίς, modern Greek Σαλαμίνα Salamina ( f. Sg. ), Also Koulouri , Kringel '- after the shape of the island) is an island in the Saronic Gulf , a tributary of the Aegean Sea . It is only two kilometers away from the coast of Piraeus , the port of Athens, and is part of the municipality of the same name in the Attica region . The municipality was formed during the administrative reform in 2010 from the municipalities of Salamina and Ambelakia, which were created in 1997 from the merger of smaller municipalities.

Salamis is known from the sea ​​battle of Salamis in 480 BC. ., Which is part of the BC Persian Wars was and where the Greek fleet of Themistocles which the Persian king Xerxes I defeated. Today the headquarters of the Greek military fleet is on Salamis .

Salamis is the largest island in the Saronic Gulf. It is located near the Attic coast and almost completely separates the Bay of Eleusis from the Saronic Gulf. The coastline is 104 km, the area of ​​the island 95 km²; the highest mountain Mavrovouni is 365 m high.

The island is rocky and mountainous; to the southeast rises the Ginani plateau . In the south it is overgrown with Aleppo pines and is endangered by frequent forest fires. 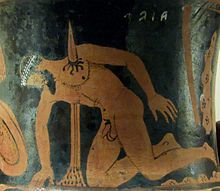 Salamis was originally called Kychreia. Later it is said to have been named after the nymph Salamis . Poseidon is said to have fallen in love with Salamis and with her fathered Kychreus , the serpent-shaped first king of Salamis. The next king Telamon married the daughter of Cychreus, Glauke , and after her death Eriboia (or Periboia). From this marriage came Ajax or Aias, the commander of the twelve Salaminer ships in the Trojan War . After the Trojan War and the suicide of Ajax, his brother Teukros returned to Salamis with Ajax's son, Eurysakes . His father Telamon was angry with him because he had not avenged the death of his brother Ajax and disowned him. Teukros went to Cyprus, where he founded a new city and named it after his place of birth (→ Salamis (Cyprus) ). When he heard of Telamon's death, he returned to Salamis, but was driven out by Eurysakes and eventually settled with the Gallaekers in the northwest of the Iberian Peninsula. The Acropolis of Kanakia, a royal seat from Mycenaean times , was discovered in the southwest of the island. In the Dark Ages the palace was abandoned and the population withdrew to the safe plateau of Ginani .

According to Strabo , the ancient capital was in the south of the island, in classical times in the east on the Kamatero peninsula on the Strait of Salamis.

The island, first settled by Aegina and later part of Megara, came as a result of the war between Athens and Megara in the time of Solon around 600 BC. At Athens.

The island was made famous by the decisive battle of the Persian Wars, the Battle of Salamis on September 27 or 28, 480 BC. BC, before which the population of Athens had been evacuated to Salamis before the Persian occupation.

The Battle of Salamis has been a fascinating subject for writers and playwrights for millennia. The first was Aeschylus , who took part in the sea battle itself and later processed its story in the tragedy The Persians . Sophocles took part in the celebrations of victory as an adolescent, and Euripides is said to have been born on the day of the battle on Salamis. Of the tropaion built after the battle, at the extreme end of the western Cape Kynosoura (also Cape Varvari) there are only rock cuts for the foundation and a limestone block. A fragment of the cenotaph for the fallen Corinthians with an inscription was found near Ambelakia and is in the National Museum in Athens . In the summer of 479, on the occasion of the occupation of Athens by the Persians under Mardonius, the Athenian population was again evacuated to Salamis, until the Greek victory at Platää made it possible to return.

In the fighting of the Peloponnesian War , the Athenian fortress Boudouron on Salamis played an important role twice: 429 BC. It withstood the onslaught of the Spartan naval commander Knemos, who had attacked Salamis and wanted to advance on Piraeus; In 427, the Athenians under Nikias von Boudouron made forays into the area of Megara . 405 BC During the siege of Athens , the Spartan Lysander devastated Salamis. The cult of the king's son Ajax with his games (Aiánteia) is documented up to Roman times, as is the visit to the cave in which Euripides is said to have lived. In 318 BC BC Salamis fell to Macedonia .

During the Turkish occupation, Albanian ethnic groups began to settle in the 16th century and this continued into the 19th century. In the middle of the 20th century, the majority of the population were Arvanites .

In the course of the German occupation of Greece in World War II , the port was bombed by the German Air Force on April 23, 1941; the Greek warships Kilkis and Lemnos were sunk. From September 1941 to April 1943, Salamis was first the 23rd U-Flotilla and later the 29th U-Flotilla of the Navy during the U-Boat War in the Mediterranean . The island was therefore repeatedly targeted by Allied air strikes. In September 1944, the last German submarines were destroyed in the port of Salamis.

In the 1960s and 1970s, during the Greek military dictatorship, parceling of land was permitted, which led to massive haphazard and unregulated building and urbanization and the construction of many weekend houses, especially on the north and east coast. The lack of appropriate infrastructure and industrialization led to the pollution of the sea and beaches on this side of the island.

Giannis Tsavaris has been mayor since the beginning of 2011.

Although there is some agriculture, the majority of the islanders live from maritime activities such as fishing, ferries, shipbuilding or commuting to Athens. Industry is concentrated in the northeast near the port of Paloukia, the shipyards of Ambelakia and the north side of the Kynosoura peninsula ( Greek Κυνοσούρα , "dog's tail " ). The heavy industrialization of the area has negatively affected the natural beauty of the island.

Nevertheless, the island is a popular excursion and weekend destination for the residents of Athens and Piraeus. The population then multiplies. The island has numerous restaurants, ouzeria, taverns, cafes and bars. The service sector therefore plays a significant role.

The ferries run daily. The port of Paloukia-Perama is the only one to operate every 15 minutes from Monday to Sunday or every 60 minutes at night. The journey takes 15 minutes.

The Salamis Naval Base 1979

In Paloukia (Greek: Παλούκια) in the northeast of the island is the Salamis Naval Base (Greek: Ναύσταθμος Σαλαμίνας), the largest naval port in Greece.

In September 1993, the Euripides Theater at Salamina on Patris Hill was opened with a capacity of 3,000 seats. It is used to perform plays, concerts and other cultural events.

The monastery is located in the north-western part of the island near the coast between pine and olive trees. The monastery was built in the 17th century by Saint Laurentios (Lampros Kanelos) on the spot where an icon of Our Lady is said to have been found. It was called "Faneromeni" ("the appeared") . During the Greek Revolution of 1821, women and children sought refuge in the monastery. It served as a hospital for wounded officers of the Greek army . The frescoes were completed by Lampros Kanelos in 1735. In 1944 the monastery was converted into a nunnery. Every year on August 23 there is a festival that usually lasts for several days and is attended by pilgrims from all over the world to worship the Madonna in Faneromeni.

The Museum of Folk Art and Culture has been located in Salamina City Hall since 2000.

Lighthouse near Peristeria, built in 1901