The title of this article is ambiguous. Further meanings are listed under Nikias (disambiguation) .

Nikias ( Greek Νικίας Nikías ; † 413 BC in Sicily ) was an Athenian politician and military leader. He was one of the key players in the Peloponnesian War (431–404 BC).

Nicias was the son of the nouveau riche Athenian Nikeratos. He had two brothers, Eukrates and Diognetus, the first of whom was also active as a general of Athens. The historian Xenophon describes Nicias as very rich, using part of his fortune to make himself popular with the people of Athens. The family fortune came from the yield of silver mines in the Attic Laurion , for the exploitation of which Nikias appointed the Thracian Sosias , who commanded 1000 slaves. Nicias is represented by Thucydides and other scholars as pious, righteous, and aloof. He belonged to that group of the rich upper class who, like the Athenian aristocrats, admired Sparta in many ways. In contrast to Pericles , he therefore took a rather moderate course towards the Lacedaemonians; he followed up on the politics of Kimon . After the death of Pericles in 429 BC He was able to gain increasing influence, although he became a competitor in the person of Kleon . 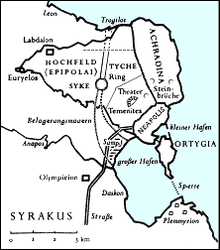 In the military field, Nicias was extremely cautious. During the Archidamian War he operated successfully in the Megaris, where he lived in 427 BC. BC occupied the island of Nisaia, but the following year an intervention against the island of Melos was canceled again. Then he turned against the Boeoite League at Tanagra and fought in 425 BC. Successful against the Corinthians in the battle of Solygeia .

After Kleon's death at the Battle of Amphipolis in 422 BC. BC Nikias was finally the leading politician in Athens. He achieved his greatest achievement in the diplomatic field: the Peace of Nicias with Sparta is named after him, but it did not last long, especially since Alkibiades , who came from the oldest family, fought against the politics of Nicias soon after.

In 415, Nikias was elected by the people's assembly in Athens, together with Alcibiades and Lamachos, to be the strategist of the planned Sicily expedition. Nicias had voted against the company, but in view of the general euphoria of the war, he was unable to prevail against the popular Alcibiades, who persuaded the people to join the company. After the escape of Alcibiades and the death of Lamachus in battle, Nicias was practically solely responsible for the siege of Syracuse , which was sustained for nearly two years. When the Syracusans received help from Sparta and slowly gained the upper hand, Nicias hesitated too long to save the navy and army. He was also very superstitious. After the defeat of the Athenians, while on the run, Nikias was captured and executed by the Syracusans together with his fellow general Demosthenes .

Nikias' son, Nikeratus named after his grandfather , and the aforementioned brother Eucrates were born in Athens during the reign of the thirty tyrants in 404 BC. Executed.

The ancient sources (especially Thucydides and Plutarch ) are very dear to Nicias.