The Greek island of Hydra or Ydra ( pronunciation : [ ˈiðra ], Greek Ύδρα ( f. Sg. )) Belongs to the group of Saronic Islands and is located about 65 km southwest of Athens . At the same time, it forms a community ( dímos , δήμος) in the Attic regional district of Islands , which also includes the neighboring island of Dokos , 2.2 km to the northwest . It is approached several times a day from the port city of Piraeus ; There are also regular ferry connections to the neighboring islands, at least in the main season.

Hydra got its name when it was still a very water-rich and fertile island. Today the supply of drinking water is demanding. Until August 2014, a ship came every day to deliver drinking water. The high costs and the poor quality of the water meant that a private company at Mandraki built a desalination plant with a daily capacity of 1,600 cubic meters, which now supplies Hydra with high-quality drinking water.

The city of Hydra

View from the land side

Night view of the main town with the harbor

Donkeys still serve a role as means of transport

Hydra is about 20 km long, 4 km wide and has an area of ​​49,586 km². Together with the neighboring island of Dokos, which is 13.5 km², the municipality of Hydra has an area of ​​approximately 64 km². The very barren, barren and mountainous island reaches a height of not quite 600 meters. The north side of Hydra is partially built up and faces the Peloponnese . The east and south of the island are almost uninhabited. The distance from Athens is about 90 kilometers.

Most of the residents live in the main town of the same name, which stretches from the pier up the slope to the castle ruins. In addition to the place Hydra there are the places Kamini, Mandraki and Vlychos. In the meantime, tourism has become the main source of income for the population alongside fishing and applied arts ; agriculture practically no longer plays a role. During the summer months, the island is sometimes very crowded, as many Athenians seek relaxation on the car-free island, especially on weekends. During the day, numerous day-trippers come with appropriate excursion boats from Attica or the Peloponnese for an hour or two.

In addition to the main town on the island, Hydra offers a few scattered and remote monasteries, some of which are difficult to reach, and many bathing bays that can be reached either by public ship or taxi boat.

Hydra is mainly made up of sediments (marine deposits) from the Middle Ages (Triassic, Jurassic, Cretaceous), which were tectonically stressed, folded and displaced as part of the mountain formation. Lenses of converted clay and volcanic rocks that have been converted into serpentine are locally incorporated into these limestone rocks . These are submarine zones into which lava flows poured. In the area of Molos are metamorphic converted pillow lavas to see. The mountains of Hydra are riddled with severe faults that indicate potential earthquake zones.

The first traces of settlement suggest that Hydra attracted hunters and fishermen as early as the Neolithic . The first settlement focus is likely in the Mycenaean period around 1300 BC. Have begun. Remnants from this time (fragments of clay vessels, walls) can be found near the settlement of Molos. In ancient times there were protective towers that had optical connection with similar structures on the opposite side of the Peloponnese. In addition to black-figure shards (approx. 600–400 BC), wall remains on a hill can be found near Molos.

The island was repopulated around 1500 AD as the inhabitants of the Peloponnese fled to avoid the cruel persecution and taxes of the Turks . Mainly residents from the region of today's southern Albania settled here (so-called Arvanites ). The parched hinterland forced them to settle on the Hydra coast. They specialized in shipbuilding and trading and over time became excellent seafarers. In 1821, at the time of the war of liberation against the Turks, the island had achieved great wealth. With 3500 inhabitants and 130 warships , which could carry a cargo of 130,000 tons, Hydra played an important role in the war for the nations. Hydra sailors and admirals such as Lazaros Kountouriotis , Andreas Miaoulis and others perished in the fighting.

Two thirds of the ships in the entire Greek Empire came from Hydra. During this time, almost all of the trees around Hydra City were cut down and processed. That is why most of the island is barren. In the 1990s, a fire destroyed more trees. 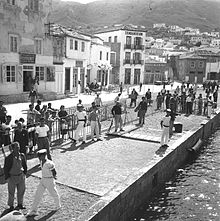 Although Andros is the most important "artist island" in Greece, Hydra also has a special cultural life, which goes back to its importance as a refuge. Nikolaos Vokos (1854–1902), a representative of the Munich School , came from Hydra, as did the painters Nikos Nikolaou (1909–1986) and Panayiotis Tetsis (* 1925).

The writer Henry Miller (1891–1980) began his journey to an old country - sketches for my friends in 1939 with impressions of Hydra. The writers Axel Jensen (1932–2003), George Henry Johnston (1912–1970), Charmian Clift (1923–1969) and Göran Tunström (1937–2000) lived on the island, as did the Canadian singer and writer Leonard Cohen (1934– 2016), who wrote two of his books here between 1960 and 1967. Marianne Ihlen , who came to Hydra with Axel Jensen, fell in love with Cohen here and inspired him to write the songs Bird on the Wire and So long, Marianne, among others . The American painter Brice Marden also stayed at Hydra frequently and was inspired by the island for several of his works, such as Souvenir de Grèce , as was shown at the major retrospective in 2007 in the Hamburger Bahnhof - Museum for Contemporary Art in Berlin. 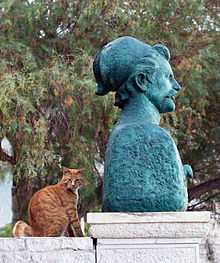 Bust of Admiral Antonis Oikonomou with a cat

On Hydra, cats were valued mouse catchers in earlier times and kept the rodent population in check. Fed by visitors and residents, the cats reproduced during the summer season. In winter they starved or fell ill. Because the hydriots feed their cats in the winter months, the situation became increasingly difficult as large cat colonies emerged. In the 1980s, a sterilization and castration program for island cats was introduced for the first time. The HydraArk project has existed since 2007, supported by locals and foreign hydriots - with the main goal of maintaining a controlled and healthy cat population on the island. The city administration supports this initiative. Islanders, volunteers, doctors and activists feed the cats and make sure that the four-legged friends stay healthy. Currently, HydraArk also takes care of donkeys , mules and horses . The cats on Hydra have become a tourist attraction.

Despite its good location, the car-free island has mainly restricted tourism to day tourists, and Richard Branson , who has a second home on the island, was unable to build a hotel complex despite lengthy advertising campaigns among the residents . In addition to hotel complexes, discos are also prohibited because of the noise pollution . No antennas or satellite dishes may be attached to houses, nor may neon signs. Plastic chairs are also prohibited. To protect the historic townscape, the construction of tennis courts and swimming pools is also not permitted. In principle, attempts are made to avert mass tourism and not to become a refuge for the jet set. In spite of this, or perhaps because of this, real estate prices are the highest in Greece.