Coarsely crystalline marble in the outcrop ( Pyrenees ). Some of the crystals can be clearly seen through the reflection of light.

Compared to other rock-changing processes, such as chemical weathering or diagenesis , rock metamorphosis takes place under significantly increased pressure and temperature conditions. This is often caused by mountain formation or other processes that are more or less closely related to plate tectonics .

During the transformation, new minerals and mineral aggregates are created , the pressure and temperature-dependent formation of which corresponds to the ambient conditions. However, the general chemical composition of a rock does not change during metamorphosis, otherwise one speaks of metasomatosis . In a pressure-stressed metamorphosis, the mineral grains are often aligned in the rock, which reflects the directions from which the greatest pressure occurred. This changes the rock structure (e.g. texture ), which means that metamorphic rocks differ in terms of their structure from chemically similar plutonic rocks that have also formed in the earth's crust .

In contrast to igneous rock and sedimentary rock, there is as yet no uniform nomenclature for metamorphic rock. In practice, different nomenclature systems are used side by side.

Starting from the protolith

If the unmetamorphic parent rock ( protolith ) of a metamorphic rock is recognizable, the name of the protolith is simply prefixed with the prefix meta- , e.g. B. in Meta basalt or Meta grauwacke (the corresponding umbrella terms are Meta volkanit or Meta sediment ).

Starting from the rock structure 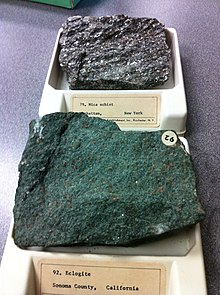 The structure and thus the corresponding names reflect whether the metamorphosis was associated with tectonic movements or not. However, the mineral content of a certain mineral class is also partly decisive for this nomenclature.

The rock names, especially the gneiss and crystalline slate, are further specified by placing the names of minerals in front of them, which the corresponding rock contains in larger proportions. The minerals are sorted in ascending order of frequency. For example, one contains sillimanite - garnet - mica schist more mica as garnet and more than garnet sillimanite.

Migmatite is the name for a rock that is characterized by a flow structure as a result of partial melting ( anatexis ). Since metamorphosis takes place by definition without partial melting, migmatites lead over to the igneous rocks.

Based on the mineral inventory

In addition, there are other designations that cannot be clearly assigned to either the structure or the mineral inventory classification. The term “ fruit slate ” describes a contact metamorphic rock whose slate structure was not created by tectonic movement, as is the case with “real” slates, but is a relic of the primary stratification of the rock.