A rock was originally referred to as a migmatite , which consists of two or more petrographically distinguishable parts. One part shows features of a metamorphic rock , another, mostly lighter part, features of igneous rock . Today it is understood as a partially melted rock (or anatexite ), the light igneous part represents the former, re-solidified rock melt.

Structure according to structure 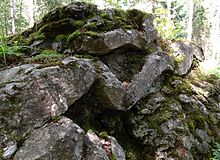 According to Mehnert (1968), migmatites are divided into four structural elements:

Distinctions according to the degree of metamorphosis

Only partially melted migmatites are also known as metatexites . These are rocks whose neosome parts are aplitic , pegmatitic or leucogranitic type.

In the further increase, almost completely melted migmatites, which can be considered almost magmatic, but still show a slight adjustment, are called diatexites .

The occurrence of migmatites of granitic composition indicates minimum temperatures of the metamorphosis of 650 ° C. Basic rocks generally only melt at higher temperatures.

Its occurrence in highly metamorphic areas of basement areas with older, at least Proterozoic rocks is typical . For Europe, the Baltic Shield and the Moldanubia are outstanding references .

In Central Europe, migmatites occur in the Black Forest (especially in the Kandel and Schauinsland ), in the Upper Palatinate Forest and in the Bavarian Forest . In the Alps there are tertiary migmatites, for example in Ticino (in the so-called southern steep zone, immediately north of the Insubric seam ) and in the Ötztal-Stubai-Kristallin .