In geology, the structure is the spatial position and arrangement of rocks and rock components. It includes the formation of the rock-forming minerals ( grain structure ) as well as the rock as a whole and its connection with other rocks ( large structure ). Typical structural elements include grain size and shape , stratification , foliation or fissures .

Structural science is used to record, map and evaluate structural features. Their evaluation allows conclusions to be drawn about the formation of a rock ( petrogenesis ) and the processes involved. In mining or in engineering-geological , hydrogeological or mineral-geological applications, structural analysis is an important basis for planning and implementing measures.

The grain structure of a rock is examined microscopically on thin sections in petrography . The individual grains or phases are described, ie the individual minerals and other components of a rock .

The large structure describes spatial observations from the handpiece of a rock to the geological profile . It can be described as a surface structure or as a linear structure on fold axes at layer boundaries, crevices and faults .

With a structure compass , the spatial position of a layer or other planar or linear geological structures are measured in one work step. 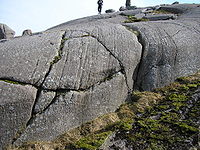 The “primary structure” of a rock or a geological structure is created through its formation (e.g. the grain structure through crystallization or stratification through sedimentation ). Subsequent events (e.g. tectonics ) change structural properties and leave behind a "secondary structure".

Is the age-deposition sequence unclear (normal or tilts) of a rock complex can Geopetalgefüge for determining the storage are used.