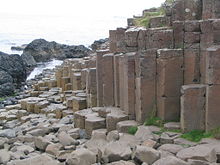 Pillar-shaped fissures in the basalts of the Giant's Causeway in Ireland, created by thermal contraction

Fissures or fissure surfaces are dividing surfaces in the rock that arise either through tectonic stress or through non-tectonic causes. Non-tectonic causes of fractures are pressure relief (especially in the case of plutonites ), pressure load (e.g. when loaded with sediment or a meteorite impact ), diagenetic processes or cooling ( contraction ) of rocks.

The opening of a gap, i.e. the space between the two walls, is in the range from less than a millimeter in width to an extension of several meters. In the microscopic area, one speaks of microcracks. Larger fissures that extend over a long distance are major rifts called.

The frequency of direction of fractures can be graphically represented in the so-called fracture rose . Different, almost parallel rifts are called a fissure group. Fissures form an essential object of investigation in structural geology and geophysics . The direction of fissure families usually corresponds to the axis of compressive stress in a region, and in tectonically active areas their orientation often corresponds to the focal areas of earthquakes .

Fissures and fissures with different orientations but with a common history form a system of fissures . Regardless of their origin, all fissures occurring in a certain area are called a fissure network .

As a rule, there is no offset of the separated rocks at the joint surfaces. However, if larger movements occur along the clefts, they develop into faults . With side opening of crevasses tear columns on.

The geophysicist Adrian Scheidegger (Switzerland and Vienna ) is regarded as an important expert in fracture tectonics . His research on the geomorphology of alpine landscapes and the statistics and dynamics of regional fissures give strong indications as to how the main axes of geological stress and directions of movement lie in the interior of the continental blocks. Where the local rift directions do not coincide with the continental directions, they often correspond to older tectonic phases (e.g. the Variscan ones ), which can thus be detected long after they have subsided. For example, the Diendorf fault north of the Wachau (Lower Austria) shows a clear connection with a leaf displacement of the Danube , whose valley was moved around 30 km to the northeast.

When a fracture is opened, fracture minerals can be deposited along the fracture surfaces due to the circulation of groundwater or hydrothermal water . Characteristic mineralizations are formed by quartz , which occurs in different varieties , as well as other silicates such as epidote or chlorite , various carbonates, and some ore minerals. In water-soluble rocks such as limestone , gypsum and some sand-lime bricks, fissures can widen as the adjacent rock gradually dissolves and thus lead to the formation of karst caves .

Larger fissures filled with rock and minerals are referred to as veins or, in the case of increased ore metal content, as veins . If the fissure filling is more weather-resistant than the surrounding rock, fissure networks can weather as positive ridges.

On the moon , fissures can reach larger dimensions because they are not closed by erosion or tectonics. They are signs of fossil tensions in the lunar crust and are divided by astronomers into the form groups of rupes (terrain levels ) and rimae (grooves).