Silicates (also known as silicates ) are the salts and esters of orthosilicic acid (Si (OH) 4 ) and their condensates . The esters are described under silicic acid esters , for the condensates see silicas . All the salts are characterized by SiO 4 - tetrahedron built compounds whose tetrahedra may be linked to each other but in different ways. Unlinked parts of the tetrahedron contribute to the charge balance as metal cations or may be present as hydroxide ions (OH - ). With the exception of alkali silicates , silicates are insoluble in water or other solvents .

Natural silicates (silicate minerals ) play a major role in mineralogy , as a large number of minerals can be assigned to this group of substances. The earth's crust consists of over 90 percent and the earth's mantle almost entirely of silicates. The most common silicates in the earth's crust are feldspars with 50–60 percent by volume . Other important rock-forming minerals are mica , clay minerals , amphiboles , pyroxenes , garnet and olivine . The common mineral quartz (SiO 2 ) is counted among the oxides in German-language literature , but among the silicates in Anglo-American literature.

All silicate minerals have a common construction principle, which is why they can be arranged relatively easily in a systematic order. The basic building blocks of all silicates are SiO 4 - tetrahedrons . One silicon atom is surrounded by four oxygen atoms. The oxygen atoms touch each other because of their size, there is room in the middle for the relatively small silicon atom (the free space is called the tetrahedral gap ).

Another property of the silicates is the ability of the oxygen atoms to participate in different SiO 4 complexes at the same time . In addition to isolated SiO 4 tetrahedra, this results in other composite components:

Aluminum can replace and substitute silicon, which behaves chemically in a similar way (one speaks here of “isomorphic replacement”), silicates in which this happens are called aluminosilicates . When aluminum (Al 3+ instead of Si 4+ ) is installed in the mineral lattice, the charge must be balanced by installing additional positively charged ions ( cations ). The Al: Si ratio cannot exceed 1, pure aluminates do not occur in nature.

Systematics of the silicate minerals

As already mentioned, the silicates form an extremely extensive mineral family. There are great differences in chemical composition, crystal symmetry , types of bond and structure of the basic building blocks, which is why there are different classification schemes for silicate minerals. The system used in Germany divides them according to the degree of polymerization of the SiO 4 tetrahedra.

Comments on the notation of chemical molecular formulas

A simplified schematic formula of silicates is:

The oxygen - silicon complexes can be replaced by hydroxide or fluoride ions . The position of "M" is occupied by one or more metal ions until the charge is equalized. Water can also be stored in the lattice of particularly wide-meshed silicates . If some of the Si x O y complexes in a certain mineral are actually replaced by ions such as fluoride (F - ) or hydroxide (OH - ), this is indicated by vertical dividing lines in the last term of the formula, for example

Stored water is noted as follows: 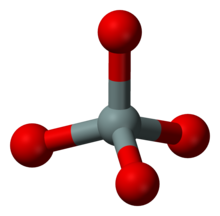 Every two SiO 4 complexes are linked to form double tetrahedra via an oxygen atom, with half of this so-called bridging oxygen being part of each SiO 4 tetrahedron. The Si: O ratio in group silicates is therefore 2: 7. This structure is less common; an example is the mineral gehlenite (Ca 2 Al [(Si, Al) 2 O 7 ]).

In ring silicates , the SiO 4 tetrahedra are grouped into isolated rings of three, four and six. Each silicon ion shares two oxygen ions with two neighboring tetrahedra, resulting in an Si: O ratio in ring silicates of 1: 3. The following formulas result for the ring structures:

The chain silicates belong to two important groups of rock-forming minerals: pyroxenes and amphiboles . The pyroxenes form one-dimensional single chains, two of the oxygen ions belong to two tetrahedron complexes at the same time, resulting in a Si: O ratio of 1: 3, as with diopside (CaMg [Si 2 O 6 ]).

Amphiboles form one-dimensional bands. Two chains are connected laterally via bridging oxygen. Compared to the chains, every second tetrahedron of each chain has an oxygen ion in common with its respective neighbor. The Si: O ratio in strip silicates is 4:11. In such siliceous bands voids are present in the (OH) - - and F - ions can occur. In the chemical formula, this is expressed by a vertical line. A mineral from the amphibole group is actinolite (Ca 2 (Mg, Fe) 5 [(OH) 2 | Si 8 O 22 ]).

With a higher degree of polymerization, layer structures made of SiO 4 tetrahedra form instead of chain structures . Within a layer, each silicon atom shares three of its oxygen ions with its neighbors. The Si: O ratio of the layered silicates is 2: 5. The layered silicates are divided into two- and three-layered silicates. Another subdivision takes into account the structure and the ions that are between two tetrahedral layers. The cavity between two layers can be occupied by (-OH), (-O - Me + ) and connect the layers with dipole-dipole forces or ionic bonds .

Synthetic sheet silicates such as SKS-6 (Na 2 Si 2 O 5 ) are used in detergents . SKS-6 sheet silicates show properties like sodium zeolites . The layer-connecting, hydrated sodium ions are selectively exchangeable in suspensions , for example for calcium ions, and are therefore suitable for water softening as ion exchangers and have good properties as washing alkalis .

In the case of framework silicates, each oxygen ion belongs to two neighboring tetrahedra at the same time (each tetrahedron is connected to neighboring tetrahedra via its corners). This creates three-dimensional network structures. The result is the chemical formula SiO 2 . The quartz shown here in the β-quartz modification is representative of silicon dioxide compounds . For further framework silicates, silicon has to be replaced by aluminum. The charge balance takes place through the incorporation of cations . The framework silicates include the feldspars and feldspar representatives , an extremely important group of minerals because of their abundance. Examples are minerals from the mixed series of plagioclase (albite - anorthite): (NaAlSi 3 O 8 - CaAl 2 Si 2 O 8 ).

Even large molecules such as H 2 O can be incorporated into the wide-meshed grid of some feldspar representatives . At high temperatures the water escapes, but at low temperatures it is re-incorporated into the crystal lattice in an environment saturated with water vapor . These water-containing minerals belong to the group of zeolites (e.g. natrolite (Na 2 [Al 2 Si 3 O 10 ] · nH 2 O)). 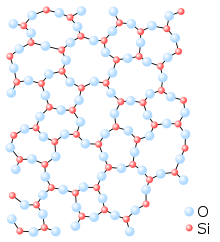 Opal is amorphous silicon dioxide with embedded water (SiO 2 · n H 2 O). Like quartz, some authors place it among the oxide minerals . The highly structured shells of diatoms (diatom) and Strahlentierchen (Radiolaria) are of amorphous silica (SiO 2 established).

Classification according to Kostov

This classification is mainly based on the chemical composition of the silicate and its crystal morphology. 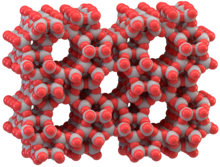 As jewelry and precious stones

Silicate can be detected with the water drop sample. Calcium fluoride and sulfuric acid are added to the substance in a lead crucible . In the presence of silicon dioxide, gaseous silicon tetrafluoride is formed , which condenses again to white silicon dioxide on a moistened, black filter paper above the crucible opening

Silicon dioxide reacts with hydrogen fluoride to form silicon tetrafluoride and water. The forward reaction takes place at the bottom of the crucible, the reverse reaction at the top of the lid.