This article is about the mineral beryl. For Beryl see Beryl .

Beryl is a frequently occurring mineral from the mineral class of " silicates and germanates ". It crystallizes in the hexagonal crystal system with the chemical composition Al 2 Be 3 [Si 6 O 18 ], that is an aluminum - beryllium silicate. Structurally it belongs to the ring silicates .

Beryl develops mainly large crystals with a tabular or prismatic to columnar habit and a glass-like to fat-like sheen on the surfaces. The largest known crystals were up to 18 meters long and weighed 180 tons. Beryl also occurs in the form of granular or massive aggregates , which are easily confused with quartz . In its pure form, beryl is colorless and transparent and in this form is known as goshenite . However, due to multiple refraction of light due to its polycrystalline design , it can also appear white and take on different colors due to foreign admixtures, whereby the transparency can decrease accordingly.

Due to its high Mohs hardness of 7.5 to 8 and its often well-developed crystals, beryl is mainly processed into gemstones , whereby the blue aquamarine , the green emerald and the light yellow to greenish-yellow golden beryl are known.

The foreign word beryl was borrowed from the Latin beryllus or berillus and goes back through the Greek βήρυλλος [ béryllos ] to the Middle Indian ( Prakrit ) veruliya and ancient Indian ( Sanskrit ) vaiḍūrya . The latter is in turn derived from a Dravidian place name vēḷūr .

The Latin beryllus was used as a generic term for all clear crystals in the Middle Ages. From Middle High German berillus and berille , the word glasses (" eyeglasses ") arose because the first lenses were cut from crystal. The feminine singular die Brille is based on a later reinterpretation of the plural form die b [e] rille (singular der b [e] rille = single eyeglass) after two eyeglasses had become common.

The Latin berillus also derives Italian brillare (“shine, shine”) - and from it French briller , whose participle brillant (“shiny, radiant”) is based on the German foreign words brilliant (a specially cut diamond ) and brilliance . The English brilliant has the same origin. According to the common pronunciation, the English spelling would actually also be expected in German ( brilliant ). However, the norm (e.g. brilliant , brilliance ) in German is based on the French origin, which in this case leads to frequent spelling errors .

The mining of the beryl variety emerald can be traced back to the 13th century BC. Traced back to Egypt . But the gem was also widely traded in pre-Columbian South America .

Already in the outdated, but partly still in use 8th edition of the mineral classification according to Strunz , beryl belonged to the mineral class of "silicates and germanates" and there to the department of " ring silicates (cyclosilicates)", where it was named after the "beryl group" with the system No. VIII / E.12 and the other members bazzite , cordierite , indialite , pezzottaite , secaninaite and stoppaniite .

The 9th edition of Strunz's mineral systematics , which has been in effect since 2001 and is used by the International Mineralogical Association (IMA), also classifies beryl in the “ring silicates” section. This is, however, further subdivided according to the structure of the silicate rings, so that the mineral, according to its structure, can be found in the sub-section "[Si 6 O 18 ] 12− six-single rings without island-like, complex anions ", where the beryl group also gives it its name “With the system no. 9.CJ.05 and the other members Bazzit, Indialith, Pezzottait and Stoppaniit.

The systematics of minerals according to Dana , which is mainly used in the English-speaking world , assigns beryl to the class of "silicates and germanates" and there in the category of "ring silicates: six rings". Here he is also the namesake of the "beryl group" with the system no. 61.01.01 and the other members Bazzit, Indialith, Stoppaniit and Pezzottait within the subdivision “ Ring Silicates : Six Rings with Si 6 O 18 Rings; possible (OH) and Al substitution ”.

Natural beryl can contain various impurities such as rubidium oxide (Rb 2 O) and cesium oxide (Cs 2 O). Water of crystallization (H 2 O, up to 3%) as well as argon and helium can also be embedded in the channels of the ring silicate structure.

Other possible foreign admixtures include lithium and sodium as well as various oxides and hydroxides, halides and / or fluorides.

Structure of a beryl unit cell

The crystal structure of beryl consists of six single rings with the structural formula [Si 6 O 18 ] 12− , which are concentrically stacked in the direction of the c-axis and each rotated by 30 °. Due to the concentric arrangement of the rings, open channels with a diameter of a few angstroms are formed . The various foreign admixtures are interchangeably stored in these hollow channels.

Between the rings, the aluminum - and Beryllium - ion , wherein aluminum and beryllium of six by four oxygen ions is surrounded. One speaks therefore of a [6] or [4] coordination in the case of aluminum or beryllium.

The crystal morphology of beryl is predominantly simple and the costume is characterized by the hexagonal prism {10 1 0} and the final pinacoid {0001}. Occasionally there are also hexagonal-dipyramidal forms in the first and second positions {11 2 1} and {10 1 1} as well as the dihexagonal-dipyramidal full form ( holoedry ).

The habitus can be short to long prismatic, the prismatic surfaces often being striped lengthways. Occasionally there are stalky and granular to coarse masses.

The colorless pure form of beryl, like the pure form of quartz ( rock crystal ), has its own name and is known as goshenite . Colorless beryls are very rare, however.

Far better known as colored varieties are the green emerald , the blue aquamarine , the yellow golden beryl (also heliodorus ) and the pink morganite , which was named after the New York banker John Pierpont Morgan (not to be confused with mogánite from the silica family ).

The variety of red beryl is also very rare , the outdated name of which, Bixbit, is one of the undesirable trade names according to the provisions of the CIBJO due to the clear risk of confusion with the mineral bixbyite .

Beryl forms either magmatically in pegmatite and granite or hydrothermally in greisen or quartz veins. Also metamorphic formed beryl have been found, including gneiss . In addition, it can be enriched secondarily in the form of soap deposits in river sediments.

Some of the many localities include Minas Gerais and Rio Grande do Norte in Brazil , Coscuez and Muzo in Colombia , Antsirabé in Madagascar , Spitzkoppe in Namibia , Iveland in Norway , Habachtal in Austria , Gilgit in Pakistan , Malyshevo and Murzinka in the Urals in the Russian Federation , Adun-Chilon in Siberia , as well as Keystone / South Dakota and Pala / California in the USA

Beryl crystals can grow to be extraordinarily large. For example, specimens six meters long and one and a half tons have already been found in the US state of Maine . Crystals up to 177 tons were found in Namivo / Alto Ligonha in Mozambique .

As a raw material

Beryl is the main source of the poisonous light metal beryllium , which is used in space technology as a component of special alloys. More than 80 percent of the world's annual production comes from the USA . In addition, beryls were cut into lenses in the Middle Ages, which were used as glasses and gave them their name. 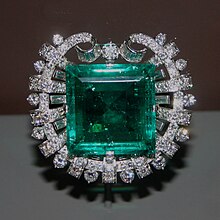 Beryls of all color varieties are processed into gemstones if they are of good quality . However, the emerald was one of the first varieties to be used for this purpose and was mined in larger quantities. The oldest mines can be traced back to around 1,300 BC. To date.

Clear gemstones are usually given a faceted cut . When grinding, however, the clear pleochroism of some beryl varieties must be taken into account.

Translucent or opaque stones are given a cabochon cut. Larger mineral aggregates are sometimes also made into handicrafts.

"Beryl" is also a given name of women.