The title of this article is ambiguous. Further meanings are listed under Minas Gerais (disambiguation) .

The capital is Belo Horizonte . It was created at the end of the 19th century in place of the old capital Ouro Preto, which, however, symbolically receives this function back on high holidays. Other cities in Minas Gerais include Contagem , Uberlândia and Juiz de Fora .

The highest point is the Pico da Bandeira in the Serra do Caparaó with 2889 m. It is the third highest mountain in Brazil and lies on the border with the neighboring state of Espírito Santo . The most important rivers are São Francisco , Jequitinhonha, Doce, Grande, Paranaíba , Mucuri and Pardo.

The name of the state of Minas Gerais means something like "general mines". In fact, there are numerous mines and mining areas for various ores and phosphates . In particular, the " Iron Square " is rich in Precambrian iron ore deposits . There are aluminum and zinc produced. In Minas Gerais there are also large deposits of various minerals and rocks . The historical gold reserves that once established the state's wealth and power are now largely exhausted. Today, however, extensive diamond deposits are being exploited in the old gold mines .

In addition to gold and diamonds, numerous other minerals are mined. A total of around 670 minerals and their varieties have been found in the Minas Gerais area so far (as of 2011) . These include the beryl varieties emerald and aquamarine, known as gemstones, as well as jadeite , muscovite , rose quartz and spodumene , of which the gemstone variety Kunzite is known.

Among other things, dolomite and itacolumite are found on rocks .

The earth of Minas Gerais ( Terra Roxa ) is so ferrous that fine red laterite soil covers the highways and rivers turn reddish brown.

The diverse agriculture of Minas Gerais produces corn , soy , rice , beans and coffee , among other things . The cultivation of cotton is an important requirement for the local textile industry .

Romeu Zema des Partido Novo (NOVO) has been the governor with executive power since January 1, 2019 .

The legislature rests with 77 elected members of the Legislative Assembly of Minas Gerais .

The state sends 53 elected federal representatives to the Chamber of Deputies and three federal senators to the federal senate of the national congress .

Around 1695 gold was found in Minas Gerais. When diamonds were also discovered, the region boomed. Slaves from Africa were brought here to work in the mines and numerous settlers and traders from Europe settled here.

In the state, the sauropod Maxakalisaurus topai was discovered, the largest of the 15 species of dinosaurs discovered in Brazil so far (as of 2006).

The state of Minas Gerais is responsible for the Universidade do Estado de Minas Gerais, which is spread over six locations .

On November 5, 2015, an environmental disaster occurred in Minas Gerais when a retention basin of an iron ore mine broke near the town of Mariana . Toxic sludge got into the Rio Doce and into the Atlantic Ocean .

On January 25, 2019, a dam broke in Minas Gerais in the municipality of Brumadinho, causing a mudslide and widespread destruction. See: Brumadinho dam breach .

The ten largest parishes of the 853 municipal towns in Minas Gerais are according to the 2010 census:

Map with all coordinates of the cities section : OSM 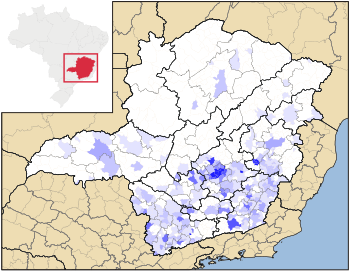 For the first time in the 2010 census, the Afro-Brazilian population of Pardos and Pretos exceeded that of the whites. The indigenous population is made up of members of the Xacriabá , Maxakali , Krenak , Pataxó , Kaxixó , Aranã , Mukurim , Pankararu and Xukuru-Kariri ethnic groups .