Acre [ ˈakɾi ], officially Portuguese Estado do Acre , is the westernmost state in Brazil . It is part of the Região Norte and is located in the southwest of the Brazilian Amazon basin . Its capital is Rio Branco . 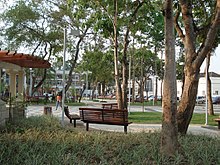 The landscape of the state is largely determined by a plain that is about 200 meters above sea level. Important rivers are Juruá , Tarauacá , Muru , Envira and Xapuri .

The extraction of rubber and Brazil nuts as well as agriculture (especially cattle breeding ) are of great importance for the economy . 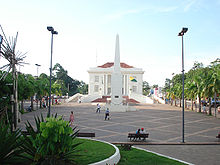 Governor's Palace in Rio Branco .
See also : List of Governors of Acre  and Republic of Acre

Acre belonged to Bolivia until the end of the 19th century. However, it was inhabited by Brazilian immigrants who had effectively formed an independent territory within Bolivia.

In 1899 there were increased attempts by the Bolivian side to bring the area under control. However, this sparked unrest among the Brazilian people, who tried several times to establish an independent republic. On July 14, 1899, the adventurer Luis Galvez Rodriguez de Arias founded the Republic of Acre ( 1st Republic ) with the support of the Brazilian state of Amazonas in the disputed area between Brazil, Bolivia and Peru .

In March 1900, Bolivian troops marched in . The Acre government went underground and sparked an anti-Bolivian uprising on September 17, 1900. In November 1900, the Acre Republic was proclaimed again ( 2nd Republic ). On December 25, 1900, Bolivian troops put down the uprising. On July 11, 1901, Bolivia decided to lease Acre to US and British investors, but on August 6, 1902 another anti-Bolivian uprising broke out and with the support of the "rubber barons" a war against Bolivia broke out. January 1903 ended.

On November 17, 1903, the Treaty of Petrópolis was signed between Bolivia and Brazil . It stipulated that Brazil cedes areas of Mato Grosso and paid £ 20 million; in return, Bolivia Acre ceded to Brazil. In addition, Brazil committed to building the Madeira-Mamoré Railway . Acre was thus incorporated into Brazil and divided into three departments. In 1920 the departments were united into one territory and on June 15, 1962 Acre was given the status of a federal state with its own legislative assembly .

Acre came to international public awareness on December 22, 1988, when the rubber collector Chico Mendes was murdered. He was an important leader of the rubber gathering movement (Seringueiros) , who organized themselves against the interests of ranchers and the timber industry in the struggle for the preservation of their livelihood - the forest from which rubber and Brazil nuts are collected. 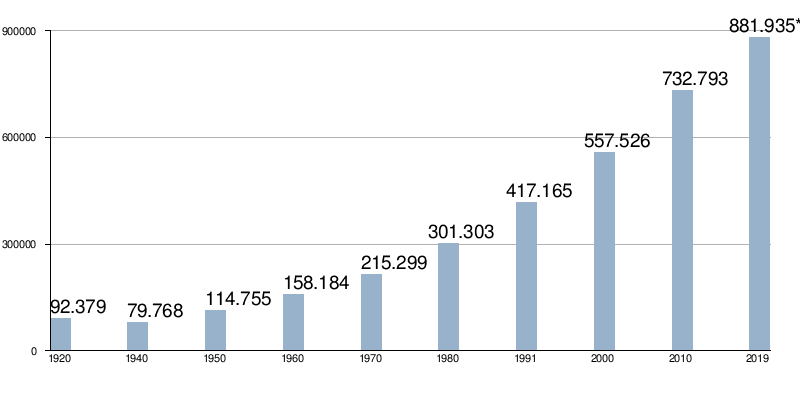 The state is divided into 22 municipalities, the municípios . The largest cities by population according to the 2010 census are:

The remaining places have a population below 20,000.