Rio Grande do Sul [ ʁiw ˈɡɾɐ̃dʒ du suw ], officially Portuguese Estado do Rio Grande do Sul , is the southernmost of the 27 states in Brazil and is divided into 496 municipalities (municípios) . The population was estimated on July 1, 2019 at 11,377,239 inhabitants, the capital is Porto Alegre . 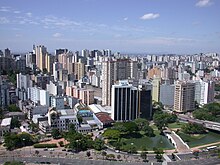 The state is bordered by Uruguay to the south and Argentina to the west . In the east, Rio Grande do Sul is bounded by the Atlantic Ocean , in the north by the Brazilian state of Santa Catarina , from which it is separated by the Rio Pelotas , one of the headwaters of the Río Uruguay . The northern part of the state lies on the southern slopes of the elevated plateau, which extends over São Paulo through the states of Paraná and Santa Catarina, which is often broken through by low mountain ranges, the general direction of which, against the trend of the slope, gives them the appearance of cliffs . A low mountain range spreads south from the Serra do Mar of Santa Catarina and crosses the state to Uruguay.

To the west of this mountain range lies a huge, grassy plain. The northern and highest part of the province is suitable for sheep breeding, while the southern part is mainly used for cattle breeding. Further to the east there is a wide area, only slightly above sea level, within which there are two estuary lagoons: Lagoa dos Patos and Lagoa Mirim , which are separated from the ocean by two sandy, partly barren peninsulas. The coast is a large sandy beach, interrupted by the flow of two lakes called the Rio Grande, which is the entrance to the navigable inland waters and various ports.

The capital is Porto Alegre , other important cities are Caxias do Sul , Canoas , Santa Maria , Nova Petrópolis , Pelotas , Passo Fundo , Rio Grande and Uruguaiana as well as Novo Hamburgo and São Leopoldo , centers of the descendants of the German immigrants, where a lot of German and the dialect Riograndenser Hunsrückisch is spoken. The descendants of Pomeranian immigrants ( Pomerano , Pommeranos ) living far inland speak z. Sometimes still Eastern Pomeranian .

The places Canela and Gramado in the Serra Gaúcha are particularly attractive for tourists because of the “colonial ambience” and their beautiful location . In 1984 the ruins of São Miguel das Missões , the former Jesuit missions of the Guarani Indians , were declared a cultural monument by UNESCO . The Aparados da Serra National Park around the Itaimbezinho on the border with Santa Catarina is also famous ; up to 1000 m high steep walls and remains of the Mata Atlântica with araucarias and a unique flora and fauna .

See also : Cities and Landscapes in Rio Grande do Sul

There are two different river systems in Rio Grande do Sul: the one flowing from the eastern slopes to the lagoons and the one from the La Plata basin westward to the Río Uruguay . The larger rivers of the eastern group are the Rio Jacuí , Rio dos Sinos , Caí, Gravataí and Camacuã, which flows into Lagoa dos Patos and the Rio Jaguarão , which flows into Lagoa Mirim . All of the former except the Camacuã flow into one of the two arms of the river opening into the northern end of the Lagoa dos Patos, which, although it is called Guaiba, is actually not a river.

The most important branches of industry are the metalworking industry, the food industry, the leather, shoe and textile industries. The state is also an important producer of grains (wheat, soy, rice, corn) and has numerous livestock farms (poultry, cattle, pigs). In addition, sugar cane and fruit are grown, and the cultivation and processing of tobacco (mainly for export) continue to play a role.

Wine has also been grown in Rio Grande do Sul since around 1874. Italian and German immigrants brought vines with them from their home countries. Around 90% of Brazilian wine production comes from here. The main growing area is the Serra Gaúcha in the northeast. There are also smaller growing areas in Viamão , Campanha and Santana do Livramento in the extreme south. The destruction of forests on an enormous scale and the timber trade contributed significantly to economic growth; today pasture farming, wood plantations (eucalyptus, pine) and soy. 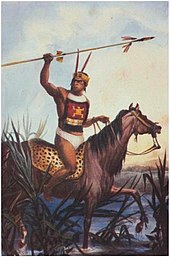 The IBGE 2008 published an overview of the population composition:

Indians, mostly Guaraní , Kaingang and Charrúa , were the first inhabitants of the state. The wandering adventurers of the 17th and 18th centuries, called gauchos by the Spaniards , acquired the reputation of a militant people as they had to defend the 1700 km long border with Argentina and Uruguay. The history of Rio Grande do Sul and the Gaúchos mingled with that of the immigrants who colonized the country. About 80% of the inhabitants are of Portuguese, Spanish, German (see Riograndenser Hunsrückisch ) or Italian origin. But the state is also home to descendants of Russians, Africans, Austrians, Lebanese, Irish, Syrians, French, Dutch, Poles, Czechs, Japanese, Belgians and Swedes. These immigrants are joined by the indigenous people and the descendants of African slaves, who have a great influence on culture.

In this region mainly German Jesuits operated a mission and set up a network of stations and schools.

The state government ( Governo ), based in the Palácio Piratini in Porto Alegre, consists of the governor and his cabinet. The parliament is the unicameral system of the legislative assembly of Rio Grande do Sul with 55 elected representatives ( deputados estaduais ). The state is represented in the federal parliament by 31 federal deputies and three senators.

The state's anthem is Hino do Rio Grande do Sul .

39. Since taking office on January 1, 2019, the state's governor has been Eduardo Leite of the Partido da Social Democracia Brasileira (PSDB), while Ranolfo Vieira Júnior ( PTB ) is vice-governor .

See also : List of municipalities in Rio Grande do Sul

Rio Grande do Sul has 11 public and 14 private universities. Of these 35 of a total of over 100 higher education institutions, the most important are:

Another of the well-known universities is the largest Brazilian private university , the Pontifícia Universidade Católica do Rio Grande do Sul (PUCRS) in Porto Alegre.

Rio Grande do Sul has z. Currently five soccer teams that play in the leagues of the Brazilian soccer championship :

The SC Rio Grande , founded on July 19, 1900 in Rio Grande, is the oldest football club in Brazil and currently plays in the second division of the Campeonato Gaúcho .