This article covers the Brazilian state of Pará. For further meanings of this name, see Pará (disambiguation) .

Pará , officially in Portuguese Estado do Pará , is a federal state in northern Brazil in the Amazon region . 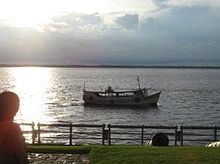 Boat on the Rio Guamá

Pará is the eastern of the two large states on the Amazon - in addition to the neighboring state named after the river, Pará covers its lower reaches. The huge mouth of the Amazon, with the largest river island in the world, Marajó , is located in Pará. The state is predominantly covered by tropical rainforest , but its area is shrinking due to increasing deforestation , especially on the eastern border.

Since January 1, 2019, the governor has been Helder Barbalho of the Movimento Democrático Brasileiro (MDB), who replaced Simão Jatene of the Partido da Social Democracia Brasileira (PSDB). In Brazil's 2018 gubernatorial elections , he received 2,068,319, or 55.43% of the valid votes. His lieutenant governor was Lúcio Vale des Partido Liberal (PL)

The legislature rests with the Pará Legislative Assembly of 41 elected MPs.

The rainforest is managed by an intensively operated wood industry. The disadvantage of the indigenous population through slash and burn and the destruction of the rainforest is problematic.

Catedral da Sé in the old town of Belém

The largest cities with their population according to the 2010 census are: 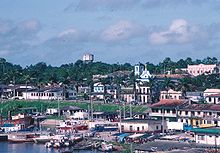 The Mangueirão Stadium , which was completed in August 1969, is located in Belém . In 2002 it was declared an Olympic Stadium . As in every other state in Brazil, a national soccer championship is held in Pará , the Campeonato Paraense .