A typical river island ( Tauberwerth ) in the Rhine near Oberwesel 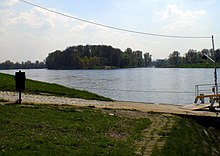 The Elbe island near Dresden - Pillnitz

A river island is an island in a flowing body of water (river, stream, etc.). Together with the lake island, it belongs to the group of inland islands .

The island of Krowia Wyspa in the Vistula

River islands are created by branching the river bed into several river arms , in rivers with anastomosing or intertwined course. Islands gradually turn into sand and gravel banks . The formation of vegetation is often mentioned as a distinguishing feature: Islands are mostly permanently and densely overgrown with plants, while banks are free of vegetation or only overgrown with non-covering pioneer vegetation. This is mainly due to the fact that banks are regularly flooded during floods, and their substrate is often relocated in the process. In natural wild river landscapes, islands are regularly re-formed and during strong floodseroded again by erosion, or their location, demarcation and shape changes due to the shifting of the course of the river. In Central Europe and other densely populated regions, this natural dynamic is almost always prevented by hydraulic engineering measures. For island formation, in addition to a natural, unaffected runoff and flood regime and a water bed not influenced by construction or other constraints, sufficient sediment material ( called bed load in rivers ) is required. The starting point for island formation is almost always coarse material that acts as a flow obstacle, usually tree trunks ( dead wood ) that are also transported.

In slow-flowing lowland rivers, river islands usually form according to a different mechanism. Due to the lower flow velocity, the erosion and the sediment transport are lower. The fine sediment, carried along in suspension as water turbidity, is deposited in slowly flowing sections of the bank and here forms raised, dam-like banks. If the river passes through such a bank during high water, its course can branch. Such tributaries usually arise when the main course is partially blocked, for example by mats of water plants. The newly created section of the course joins the existing course further downstream, which divides very large parts of the floodplain into a system of extensive islands. The resulting run, which consists of two to four parallel sections connected by cross pieces, is morphologically described as an "anastomosing" river. Islands in anastomosing rivers are often very stable and exist for a long time. They are not always flooded in high water. The subcourses flowing around them mostly have stable, relatively steep banks. A Central European river that still shows this behavior today is the Narew in Poland.

River islands are typical of larger rivers; there are hardly any islands in streams . Rivers with predominantly meandering courses form no, or only a few, islands. Above all, the very large currents of the earth show an anastomosing course over the greater part of their course, with very numerous river islands of very different sizes. The mechanisms that cause this, especially in very large rivers, are not yet understood in detail. In Brahmaputra in Bangladesh, individual islands can be up to 15 kilometers in length, and around 60,000 people live on the islands.

River islands very rarely arise when a deeply eroding river course, through its sediments, saws its way into the rock and so earlier elevations or hills, which can consist of hard rock as rock islands, come to lie in the middle of the river, or deeply cut Rock channels delimit reef-like blocks between them. This erosion branching occurs occasionally in very fast flowing sections of the run, almost always at rapids or waterfalls.

In the major rivers of Central Europe, the number of river islands has been greatly reduced by hydraulic engineering measures compared to historical times. The course of the river was narrowed and defined in order to make the flood plain usable, and tributaries were combined with the main course to stabilize the water depth and flow to improve navigability . In the Austrian section of the Danube , 6 of the original 200 river islands are still preserved today. One of the last European wild rivers, in which river islands can still emerge and disappear, is the Tagliamento .

Depending on the view, the largest river island in the world is the Ilha do Bananal located in Brazil completely in the course of the Rio Araguaia with (currently) 19,162 km² or the island of Marajó in the Amazon estuary with (currently) 40,100 km² area, surrounded by various tributaries . The assignment depends on whether the island of Marajó, which also touches the sea, is viewed as a real river island.