The title of this article is ambiguous. Further meanings are listed under Chortyzja (disambiguation) .

Khortytsia ( Ukrainian Хортиця Khortytsia , Russian Хортица Chortitza ) is the largest island in the Dnieper . It is located in eastern Ukraine in Khortytsia district of the city of Zaporizhia below the large dam of the DniproHES hydropower plant . The island is surrounded by the Staryj Dnipro (Old Dnepr) to the west and the main stream to the east. It has an area of ​​around 24 km² (around 12 km long and a maximum of around 2.5 km wide) and is often incorrectly referred to in the Ukraine as the “largest river island in Europe” because the Wilhelmsburg islands in the Elbe and the Große Schüttinsel in the Danube are significantly larger.

In the textbook of the Byzantine Emperor Constantine VII called De Administrando Imperio , it was first mentioned in a document as St. George's Island in the 10th century . The toponym Khortytsia first appears in the resulting beginning of the 12th century Nestor Chronicle (Solnceva's Povest 'wremennych let) on the year 1103rd There are a number of more or less convincing hypotheses about the meaning of the name , the most popular of which leads it back to the sun god choir .

People have settled on Khortytsia for over 9000 years, so there are a large number of archaeological sites such as graves, settlements, pagan sanctuaries and fortification lines from the 18th century. The northern part of the neighboring island of Mala Chortyzja is so rich in archaeological finds that the excavation situation there was described as “seven-layer bread and butter”.

The territory of Khortyzja, the surrounding smaller islands and the opposite banks belong to the National Sapovednik Khortyzja . The central object of the Sapovednik is the Museum of the History of Zaporozhian Cossacks .

Description of the island

Before the dam was built, the nine rapids of the Dnieper were located above Chortyzjas. They sank in the reservoir, which is how the river became navigable. The rocks and islets between the dam and the island are the remains of the Dnieper rapids.

The rocky northern part of Khortytsia protrudes over forty meters above the water surface in some places, while the southern part is characterized by flat banks, beaches, bays and lakes. A multitude of rare and also endemic plant species and a rich fauna live on the island . There are various forms of landscape on the island, such as remains of the steppe, oak and coniferous forests and a diverse aquatorium in the southern area. Two combined road and rail bridges of the Dnieper crossing and a smaller road bridge at the northern end lead to the island.

In the heavily industrialized city of Zaporizhia, Chortyzja is a popular local recreation area with its forests, meadows, lakes and beaches. Some larger companies have their rest homes here and there are many dachas . Although there have been plans for a long time to relocate the existing settlements due to the island's special status, little has happened here so far.

Some of the archaeological sites have been prepared as a tourist attraction. For example, on the Braharnja Hill you can admire a prehistoric cult site from the Bronze Age, which is sometimes also visited by new pagans. Local archaeologists believe the facility may have had a calendar function for predicting summer and winter solstices.

Until April 1993, Khortyzja was the historical-cultural sapovednik on the island of Khortyzja . The increase in status to National Sapovednik was also connected with an expansion of its territory: the surrounding islands and opposite banks were added.

According to the Decree of the Deputy Prime Minister and Cabinet of Ministers of Ukraine dated July 1, 1992 , No. 364, “national” status is given to “cultural institutions that play a prominent role in the people's spiritual life”. This status means greater prestige for the institution in question, but also funding from the state budget and the ban on (even partial) privatization.

The sapovednik is divided into several zones of different protection, which extend to a complete ban on entering and driving in the southern, "floating" part of the island.

Despite this status, the construction of new, urgently needed bridges across the island, which is already heavily burdened by road traffic, is planned and has been underway since 2004: A six-lane expressway is to cross the protected area. Critics fear a creeping privatization of parts of the island due to the accompanying infrastructure (gas stations, motels, etc.). 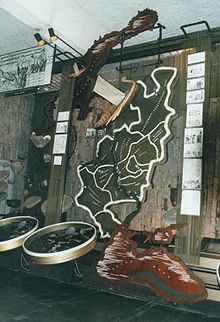 From the museum exhibition

Since the mid-1960s, there was a time of national enthusiasm in Ukraine under the then party leader of Ukraine, Petro Schelest (1908–1996). In Zaporozhye, members of the state and party apparatus (including Mykola Kyzenko , 1921–1982) planned to set up a large Cossack memorial on Khortyzja , the heart of which was to be a museum of the history of Zaporozhian Cossacks . The planning of the monumental project made rapid progress, not least thanks to the support of Schelest himself. When he was suddenly deposed at the beginning of 1972 and replaced by Volodymyr Shcherbyzkyj (1918–1990), an ice age began in Ukraine, which, in addition to dealing with the Cossack issue in general, and the project of the Cossack memorial also fell victim. Since the planning was already well advanced and building work had already begun in some cases, it was decided to build at least one museum - which was only allowed to have something to do with the Cossacks, however. The implementation of these new plans was slow, the Museum of the History of Zaporizhia was only opened in 1983 . It was a typical Soviet museum of local history, telling the history of the region as interpreted by the Communist Party. One of the three halls dealt with the time from the beginning of human history to the October Revolution of 1917, the other two showed the following periods - civil war, socialist construction, the Great Patriotic War of 1941–1945, reconstruction and industrialization, the flourishing of Soviet society .

In the wake of glasnost and perestroika, discussions arose about a return of the museum to its originally intended theme, which was also allowed by the Council of Ministers of Ukraine in May 1988. But it would be a few more years before the museum was renamed the Museum of the History of Zaporozhian Cossacks in April 1993 . After briefly closing it, it reopened in October of the same year - as the Soviet part of the story had been removed, but with two almost empty halls and one room that had little to offer the Cossacks.

Little by little the halls were filled with exhibits and special exhibitions, but much was based on improvisation. After the so-called Orange Revolution in winter 2004/2005, the previous General Director Heorhij Krapiwka, who had been criticized many times, was dismissed in March 2005. The journalist Kostyatyn Sushko became the new director in April 2005.

The oldest archaeological evidence of human settlement on Khortytsia is around 9,000 years old. Since then, traces of various archaeological cultures can be found over the millennia.

With the first written mention in the 10th century, the island entered the stage of history , henceforth mentions can be found in the chronicles; Chortiza is known as the “Varangian Island”, the island of the Baltic Sea Vikings, because it is located on the old water and trade route from the Varangians to the Greeks . In 1103, the princes of the Kievan Rus gathered with their troops on the island to begin a campaign (the toponym Khortytsia is mentioned for the first time in this context ). In 1223, princes of the Kievan Rus met here again before an attack on the Mongols .

Around 1553 Dmytro Wyschneweckyj († 1563) built a fortress on the smaller neighboring island of Mala Chortyzja , which was destroyed after a short time. In the 17th century Khortytsia belonged to the territory of the Hetmanate , the community of the Zaporozhian Cossacks . During the Russo-Turkish War 1735–1739 a fortification system was built, including a. to protect a shipyard for warships built on Mala Khortyzja in 1737 . Parts of these fortifications can still be seen today.

Since 1790 Mennonites from Danzig colonized the island, who were lured into the Russian Empire by the promise of Catherine the Great to be exempt from military service .

In 1916, the Mennonites who emigrated again handed the island to the city of Alexandrowsk (Ukrainian Oleksandriwsk ), which was renamed Zaporizhia in 1921. As part of the implementation of the first five-year plan and Lenin's GOELRO plan , the Lenin-Dnepr hydropower plant ( Ukrainian DNIPRO HES , Russian DNEPROGES ) was built north of the island from 1927 to 1932 . At the same time, intensive archaeological research was carried out with the participation of the Cossack researcher Dmytro Jawornyzkyjs (1855–1940). After the dam was completed, the rapids that gave the region and the city its name (Ukrainian sa poric - "behind the rapids") disappeared in the expanding reservoir - the Dnepr also became navigable here. Another reservoir extends from the south as far as Zaporizhia, the Kachowka reservoir . It was created from the construction of the hydroelectric power station near Kachowka between 1950 and 1956.

In 1958 Khortytsia was declared a natural monument of local importance . The island's protection status was increased several times: in 1963 by the Council of Ministers of the Ukrainian SSR to the level of a natural monument of republican importance , in 1965 by a Council of Ministers resolution on the preservation of memorials and the establishment of Sapowedniki Chortyzja was declared a Sapovednik .

In 1993 the island experienced its last (as of 9/2005) status increase: by a resolution of the Council of Ministers, the historical-cultural sapovednik on the island of Chortyzja became the national sapovednik "Chortyzja" .

After several attempts to establish an ethnographic part of the museum failed over the course of decades, the construction of a sitsch as an open-air museum on the northern part of the island began at the end of 2004. The Orange Revolution had an effect on Khortyzja in spring 2005: The previous director of the Sapovednik, to which the museum also belongs, Heorhij Krapiwka, was dismissed and replaced by Kostyantyn Suschko.

Khortytsia is known as the "cradle of the Zaporozhian Cossack" because the first Zaporozhian Sitsch is said to have been on it. Sometimes the island is referred to as the "Shrine of Ukraine".

Historical-cultural complex on the island

To 1553 was Dmytro Wyschneweckyj († 1563), a nobleman in Polish services, Starost of Kaniv and Cherkasy , on the much smaller neighboring island of Mala Khortytsia build (small Khortytsia) a fortress from here campaigns against the Crimean Khanate and the Ottoman Empire to Companies. The fortress existed for about two years, then it was razed by the attacked.

Vysnevetskyi's short-lived fortress has found a firm place in Ukrainian history, as it is considered the first Zaporozhian sitsch and thus the starting point and birthplace of Zaporozhian Cossacks.

This representation is problematic, however, since a sitsch was the military and administrative center of the Cossack society and showed a certain continuity in its existence. None of this applies to Vysnevetskyi's fortress: it was neither such a center, nor was it immediately rebuilt elsewhere. This was common from the existence of the Tomakivska Sitsch (1564–1593) until the final abolition of the Zaporozhian Cossack with the destruction of the last, the New Sitsch , in 1775.

For his part, Dmytro Vysnevetskyj has entered the pantheon of Ukrainian national heroes - he is optionally referred to as the “first Otaman in Ukrainian history”, “first hetman of the Zaporozhian Sitsch” or “one of the first Cossack hetmans in Ukraine”.

On Khortytsia there is a 74.5 meter high triple portal mast with 15 conductors of a 150 kV line from the Zaporizhia hydropower station to the city of Zaporizhia.

Literature on Khortytsia in Western European languages ​​is rare. The corresponding entry in the Encyclopedia of Ukraine ends in 1965, so it is very out of date. Ukrainian and Russian-language books on the island are hardly available because of the small number of copies, and unfortunately they are mostly written with extreme tendencies and rarely meet scientific standards. For these reasons, they will not be mentioned at this point.