The title of this article is ambiguous. For the composer and the most famous name bearer see Johann Sebastian Bach , for further meanings Bach (explanation of terms ) . 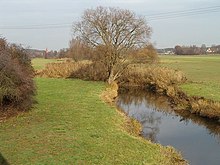 Zenn near Atzenhof (Fürth) as a slowly flowing stream

A stream is a small body of flowing water. Differentiating it from river is difficult and depends on the context. So z. B. the navigability , the discharge (less than 20 m³ / s) or the width (less than 5 m) can be used as a criterion. The average lower water depth and the smaller water cross-section as well as the resulting frequent direct interrelationships between water body , river bed , bank and bank vegetation distinguish the character of the stream from that of a river.

In hydrological terminology, streams are small flowing waters. There are so-called perennial streams that constantly carry water, as well as periodic or episodic streams that occur only temporarily, cyclically or irregularly, such as the stone trenches of the Muschelkalk regions in Thuringia or other above-ground karst streams.

Characteristic for the stream are the flow speed of the water, the temperature conditions, the oxygen content, the light conditions, the organisms occurring in the stream and the environmental pollution by chemicals. Another characteristic of a brook is that its water level rises or falls, the substrates contained in the brook shift and the course of the brook can change over time.

The flow speed is influenced by stones, dead wood and smaller islands, constrictions, local depressions or shallow areas in the stream .

In horticultural technology, artificial streams are created under design aspects.

The limnology distinguishes three regional basic types of streams, the mountain , the central mountain and lowland stream . A brook that almost never runs out and that arises from springs in forests is called a forest brook.

Bach is formed from ahd. Pah Pl. Pechî , mhd. Bach Pl. Beche . Place names on -bach can be assigned to the high medieval conquest, probably between the 11th and 13th centuries, but much later formations are common.

The old term Fließ (to flow , river ) is still in use in Brandenburg and Berlin , for example for the Tegeler Fließ , the Pfefferfließ and in the Spreewald . In the bordering regions , rivers are now also known as ditches that are supposed to divert rainwater from fields ( drainage ). These waters often dry out in months with little rain. For the Low German equivalent, see Fleet . 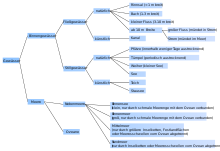 The hydrology in connection with the orography examine the variety of forms of the flowing waters and try to work out certain basic types: If one looks at the entire stretch of a stream, an upper course , a middle course and a lower course can be distinguished. In a model-typical stream course, these sections correspond to the three basic forms of mountain , low mountain and lowland stream . But streams naturally show a varied course, in small forms from the source stretch , over almost standing sections with backflow zones and waterfalls or swamp sections , narrowings with gorge character or fords as shallow water far beyond normal width , up to seepage in which the water dips below the ground and continues to flow there or is lost in the groundwater . 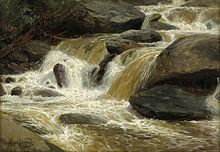 "Gebirgsbach", painting from the 19th century by Paul Weber

In mountain streams there is a stronger current due to the greater gradient, which ensures favorable oxygen conditions, but also strong erosion . The river bed is very stony. Mountain streams carry a lot of debris with them. Most of the animals found in the mountain stream are very sensitive to a lack of oxygen. There are hardly any aquatic plants .

In low mountain streams the gradient and thus also the current is lower than in mountain streams. In addition to erosion, there is also sedimentation . Smaller islands and gravel banks emerge again and again in different places. The diverse small spaces that arise here offer the most diverse aquatic life a basis for life. The brown trout is the pointer type . 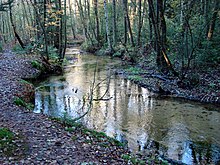 The gradient is lowest in flat- land streams. The water flows leisurely in wide meanders . Sedimentation and nutrient richness are quite large, so that the river bed is relatively sandy and interspersed with organic material. When the current is low, there are numerous aquatic plants in the stream.

Streams, like other bodies of water, are designated as "peaceful" or as torrents according to their benefits or the dangers they pose for humans , with flood protection measures being appropriate for the latter in inhabited areas .

The natural bed of the brooks in Central Europe has mostly been heavily modified by human intervention. Stream straightening and the discharge of pollutants have led to considerable disruption of the natural course in urban areas and to an impairment of the self-cleaning power of industrial rivers. The use of pesticides and the over-fertilization of the fields near the streams due to the intensive agriculture that is common in many places also lead to increased levels of pollutants in the stream. In many small streams, strong pesticide loads are measured again and again, which in some cases far exceed the permitted limit values. The phosphate - and nitrate feed leads to an increased algae growth, the discharge of waste water to a proliferation of bacteria .

In addition to the course of a natural stream, the word stream also describes artificially created flowing water in horticulture . Streams are often created in connection with garden ponds in garden design , sometimes even without discharging into stagnant water . The water pumping is generated by a pond pump. The subsurface of the stream is sealed with pond liner, unless it consists of industrially manufactured stream shells.